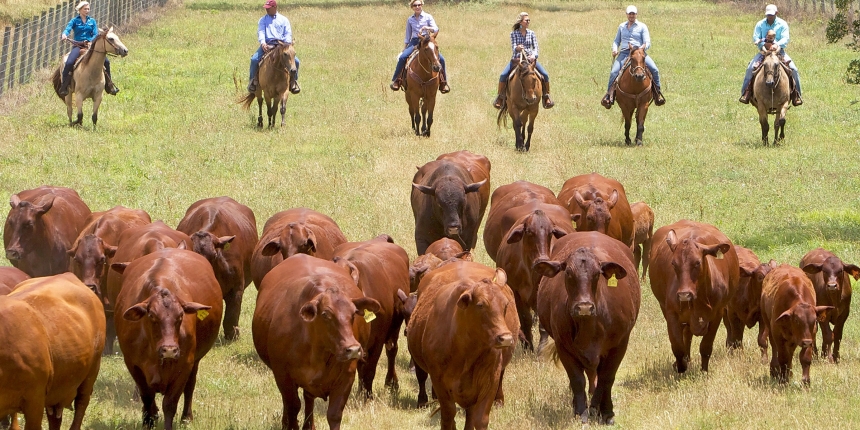 When R.A. Wendt first registered his “S Lazy S” herd in 1909, he knew he was on to something. He continued in his venture for more than 30 years before his son Dan joined his efforts the 1940’s. Dan and his father were crossing Angus bulls with Braford cows. They experimented with crossing Brahma and Hereford, and later turned to a milking Shorthorn. In 1953, Wendt, his father, R.A., and wife, Jane, visited a cattle sale at the King Ranch. It was there he realized the Santa Gertrudis Breed was what he and his father had been trying to achieve with various breeding combinations. His first Santa Gertrudis bull was purchased from the King Ranch. In 1954, Dan and his father formed “R.A. Wendt & Sons” listed in the Santa Gertrudis Breeders International herd book as herd number 621.

Dan and his father’s purebred Santa Gertrudis herd was quickly recognized for breeding quality animals, selling cattle with the S Lazy S brand throughout the U.S., as well as Canada, Mexico, South Africa, Brazil, Paraguay, Russia, and Morocco. From the 1970s to 2000s, Dan and his wife Jane exported cattle internationally, largely due to their robust performance records and legacy of strong herd sires. In 2016, the brand and ranching operation was purchased by Dan’s daughter Nancy and her husband Gene Kubecka along with their son Daniel and his wife Lauren. Together they are striving to bring the multi-generational ranch in Matagorda County to the next level.

Over the last half century, the family has been extremely active in the leadership roles of the Santa Gertrudis association. Both Dan and Jane Wendt served as breed President, in fact, Jane was the first female president of the breed. Gene is currently the president of Santa Gertrudis Breeders International. Nancy and Daniel are both currently serving on breed committees. 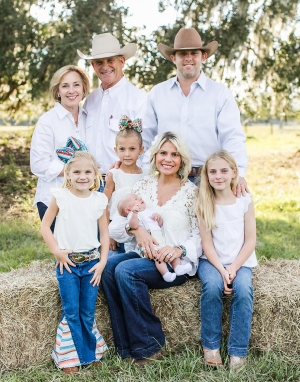 On the performance side, Wendt Ranches has been performance testing cattle since the 1950s, which is a clear indication that Dan Wendt was completely ahead of his time. It was that focus on continuously gathering performance data that has helped Wendt Ranches secure its longevity in the beef industry.

“My granddad was pushing the breed hard because it was something he truly believed in. The breed association was not pushing performance and carcass quality like my granddad was early on. Fast forward to today and the breed association has placed a major emphasis on collecting data, performance testing and EPDs. So much so that Santa Gertrudis breed was the first Bos Indicus breed to offer genomic enhanced EPDs,” Daniel says.

Historical challenges aside, one thing’s for sure: The performance data that the Wendt Ranches has collected for the past 75 years is going to be instrumental going forward.

“AI and ET are both tools we are using to continue to push the envelope in producing the best cattle possible by combining phenotype and genotype,” Daniel says. “The Santa Gertrudis breed has been knocked on its carcass quality in the past. But the amount of work and emphasis that the breed as a whole has put on carcass quality over the last decade has moved the needle in a major way. We’ve really worked hard to close that gap over the last decade.”

While Wendt Ranches plans to use AI and ET work instrumentally to continue to move that needle even more, at the same time the family is striving to not lose what got Wendt Ranches to where they are today – namely the historical, long-standing performance data collected by Dan for decades.

Indeed, there are a series of superior bloodlines that came from Wendt Ranches over the years, earning the ranch accolades aplenty throughout the industry.

Gene said, “Our main focus is to continue developing the kind of bulls that Wendt Ranches is known for like Superman, Crackerjack, Partner, All Star, Sheriff & Geronimo. We are striving to produced quality bulls for the purebred and commercial market.”

Currently, Wendt Ranches boasts a young herd sire “Primetime 9042” that is one of the leading bulls in all the measurable performance traits for the entire Santa Gertrudis breed.

Along with producing bulls that have made their mark all over the world, the Wendt Ranches’ females have left a lasting legacy of their own – known for being deep bodied, sound udders and fertile.

“Our focus going forward is to use AI and ET work to produce the best cattle we can for our environment,” Daniel says. “We know that Santa Gertrudis and Santa Gertrudis-influenced cattle thrive on the Gulf Coast, and they are proving they thrive all across the country. Our goal is to make the best cattle possible by combining our genetics that have been performance tested for close to 75 years and now include EPD’s with DNA to dial in on those superior genetics.”

This holds true as the family’s fifth generation is continuing the ranching legacy as Daniel and Lauren’s daughter, Kinsley Kubecka started showing in the recent years. Her Primetime 9042 heifer was a class winner and the past National Jr. Heifer Show.

Since the 1950’s the ranch has produced performance enhanced Santa Gertrudis cattle that are data driven and profit proven. This philosophy is also utilized in the ranches growing American Red & STAR 5 footprint.

“We have found that the heterosis achieved when breeding Santa Gertrudis cattle to the European and Continental breeds is nothing short of a home run,” Daniel says. “Our goal at Wendt Ranches has always been to produce predictable, profitable, red hided, heat tolerate genetics that perform both on the hoof and the rail.”