Ways to Reduce Stress in Cattle and Horses 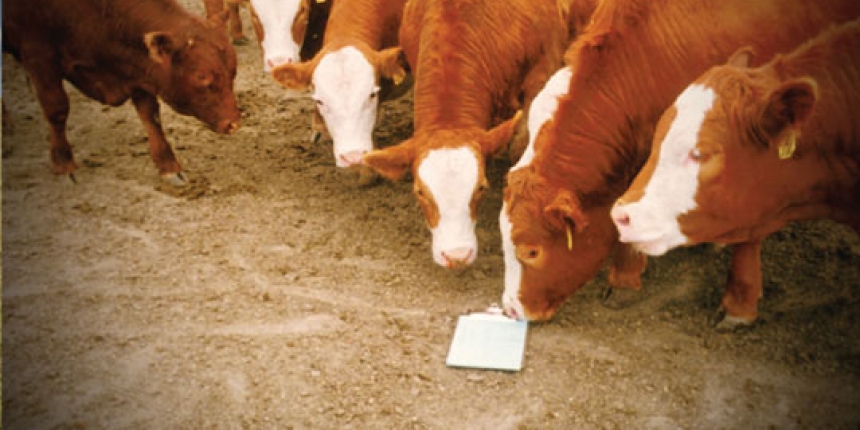 New things are both frightening and attractive.  If you place a flag in the middle of a field, the cattle will be curious and come up to investigate it.  However, if that same flag was suddenly shoved in the animal’s face, it would react violently due to fear.  New things are attractive when the animal is allowed to voluntarily approach them, but they can be very scary if they are introduced too quickly.  Researchers have discovered that an animal’s brain has separate emotional circuits which motivate it to either go into fear mode or seek and approach mode.  The circuit works like a switch and it can be in either the seek position or the fear position. When I put a clipboard in a pen, the cattle approached and sniffed.  When the wind made the paper move, they suddenly backed away. When the paper stopped flapping, they approached again (Figure 1). The switch in the brain was flipping back and forth between fear and seek.

Experiences with New Things Should be Positive

When cattle or any other animal is first introduced to something new, such as the milking parlor, a new person or handling corrals, it is really important for initial experiences to be positive.  If the first experience in the milking parlor is falling down or the first experience with a new person is being hit with a stick, the animal may develop a fear memory.  First experiences can make a big impression.  The fear memory is usually very specific, such as a visual sight or sound that the animal associates with the traumatic event.  It will be something that the animal was either looking at or hearing the moment the bad thing happened.  Some examples of fear memories are a horse that was afraid of people who were wearing black cowboy hats. White cowboy hats had no effect.  Fear memories are very specific because they are sensory based and not word based.  Another animal might be afraid of all long, straight objects because he was hit with a cane.  Other long, straight objects may also be feared such as brooms, show sticks, or microphone stands.

Other common fear associations that many animals make is that men are bad.  This often occurs in horses that have been subjected to tough, harsh training methods. In high strung, excitable breeds of animals, these fear memories may be almost impossible to completely eliminate.  Sometimes a fear problem can be solved by removing a feared object from an animal’s life.  A horse that went berserk with a snaffle bit was calm when he wore a different type of bit that was one solid piece.  The snaffle was associated with his mouth being hurt.  Fear memories are sort of like flashbacks that people have when they have posttraumatic stress syndrome. If your cattle have bad fear memories associated with the milking parlor or the handling corrals, this will have a negative effect for the animal’s entire life.  Make first experiences positive. Sometimes painful procedures must be done in the squeeze chute, but it is essential that initial experiences in the squeeze chute are positive.  Feed your cows some treats after they exit.

Young heifers and weaned beef calves should be given quiet, careful “practice” runs through the milking parlor or handling corrals.  They should be walked through and have no procedure done.  Beef calves should walk through the squeeze chute several times without being caught. In a dairy, the heifers should be accompanied by older experienced cows. It is also recommended to train animals that some variations in their routine are safe.  This will prevent fear and panic if the familiar stock person gets sick. When cattle are suddenly exposed to something new, some of the wildest, craziest cattle are ones that have had almost no previous exposure to new things. Cows that have been handled all their life by a single person with a single familiar vehicle may go berserk when they are taken to an auction or other new place.

Another common example with show animals is illustrated in this comment.  My horse was quiet at home and he went crazy at the show. The reason this happened is that there are lots of new things at the show such as flags, balloons, and bikes.  Animals need to be carefully introduced to those things BEFORE they go to a show. The best way to do this would be to tie flags to a pasture fence and let your animal voluntarily approach them.

Since cattle are sensory based thinkers, they notice little details in their environment that most people ignore.  A new heifer will balk and may refuse to walk over a drain in a milking parlor but the experienced cow will walk over it.  In a beef facility, a cow may refuse to move past a dangling chain or balk at a reflection on a puddle.  You need to get inside your facilities and see what is making your animals stop.  Calm cattle will point both their eyes and then ears at things that either attract their attention or scare them.  You should remove distractions from your facility, such as dangling chain or a coat hung on a fence.  If the animals are being spooked by distractions, such as a passing vehicle or people walking by, you may need to install a solid fence to block their vision.  Cattle often refuse to go into dark facilities when it is really sunny outside.  I call this the “black hole” or dark movie theatre effect.  If you are having this problem, you will need to open up a wall or a door to get more natural light into the building. At night, lights can be used to attract animals into a building.  However, on sunny days, the only way to get enough light into the building is to let in natural light. In new construction, white translucent skylights should be installed to let in lots of shadow free natural light.

Try to experience the world as a sensory based world.  What are your animals seeing and hearing?  It is also really essential to avoid harsh treatment that creates fear memories.  When an animal forms a fear memory, it can be very difficult to eliminate it.

People Need to Calm Down

Research shows that yelling and screaming at cattle is very stressful.  People must curb the urge to yell at animals. The first step in lowering stress is for people to completely calm down.  The arm waving also needs to stop.  It is really wonderful that there is more and more interest in learning low stress handling methods. The first step is to calm down because calm animals are much easier to handle compared to frightened agitated animals.  Excited cattle stick together and are difficult to sort.  After an animal becomes frightened, it takes 20 to 30 minutes for its heart rate to return to normal.  After the cattle are brought into the corrals, it is often advisable to allow them to settle down for 15 to 20 minutes before you work them.

I have lots more information on cattle behavior on my website www.grandin.com and in my books, Humane Livestock Handling, Animals in Translation, and Animals Make us Human.