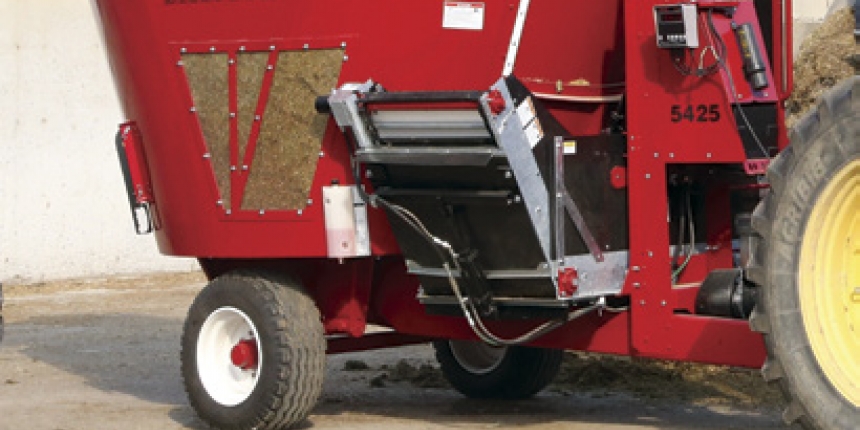 In the past two issues of TMR Corner we have explored how feeding a beef cow-calf herd with a vertical TMR mixer simultaneously decreases feed waste and increases animal performance. In this issue we will use that information to develop a cost-benefit analysis for adopting the use of a vertical TMR mixer on a moderately sized cow-calf operation.

Feed savings with a TMR mixer come from two sources:

1.) minimizing direct losses (waste) due to selection, rejection and trampling (very high [>30 %] in some round bale feeders), and 2.) minimizing the cost of meeting the nutritional requirements of animals at different stages of production.  Beef cow requirements are quite low post-weaning during mid-gestation, then relatively high during late gestation, calving and early lactation, and also during breeding; replacement heifers and growing calves have their own high requirements, if suitable rates of gain and fertility are to be achieved.

On the other side of the equation, the forages that are produced on farm consist of different types and mixes of species and different stages of maturity and cuttings, with variable effects of weather during harvest — and comprise a range of quality and nutritional composition. By analyzing forage ahead of time and designating forages to be used  ccording to stage of production and nutritional requirement, a vertical TMR mixer enables appropriate forages to be blended, and supplemented in the most cost-effective manner available, to precisely meet the nutritional requirements of the animals being fed, without waste. Sadly, no controlled (scientific) research appears to be available that documents the extent of these savings.

Jaylor customers who have changed from traditional hay feeding to TMR feeding of beef cows routinely report reductions in hay use of between 30 and 50 percent. It is our experience that a conservative value for feed savings from optimal use of forages through TMR feeding would be about 15-20% of the market value of current annual feed costs (more likely 20-30%).

The greatest economic benefit to TMR feeding on beef cow-calf operations generally comes from an increase in animal performance associated with more uniformly meeting the nutritional requirements of each animal. This results in fewer calf losses from slow and hard calvings associated with thin and over-conditioned cows, fewer problems with calf scours and respiratory disease due to better colostrum production (quality and quantity), better calf growth rates due to higher milk production, and finally, improved conception and calving rates from improved

The benefit for a given herd will be a function of the relative improvement in each area that TMR feeding brings. Again, controlled scientific research in this area does not appear to exist, but evidence from Jaylor customers suggests that an increase of 10-15% in the total weight of calves marketed annually appears to be a reasonable expectation.

The value of a vertical TMR mixer:

The value of a TMR mixer for a beef cow-calf operation will be a function of the number of days cattle are fed, the stage of production the cattle are in when they are fed (e.g. dry, mid gestation, versus late gestation and calving), and the availability of alternative, low cost ingredients (e.g. byproducts) that can be fed.  In the northern United States and Canada, beef cows are routinely fed for about 180 days (e.g. November through April), from weaning at about 5-6 months gestation through calving, and in some cases into breeding. We will therefore consider the economic benefit of TMR feeding for a period of 3 months late gestation and 3 months calving (early lactation).

The total value of a TMR mixer for the 100 cow beef operation in this example equals $11,343 to $16,334 per year. This would be even greater if the additional benefits of savings for replacement heifers and reduced health treatment costs were included. An appropriately sized, new vertical TMR mixer (e.g. Jaylor 5425) for a 100 cow herd may cost about $40,000, and should last about 20 years if this is all it is used for. Even accounting for the cost of operating the tractor(s) to load and run the mixer, this represent a very low amortized cost relative to the benefits realized by using a TMR mixer on a cow-calf operation. It perhaps explains why growing numbers of operations with even as few as 50 cows have found it economical to adopt TMR feeding. Finally, the benefits of using a TMR mixer on a beef cow-calf operation are amplified when additional feeding opportunities such as early weaning, preconditioning, growing purchased calves, use of alternative ingredients, and risk management are considered — “Because Nutrition Matters.”

Dr. Alan Vaage is a Ruminant Nutritionist with over 30 years of experience in the beef industry, and currently provides technical support for Jaylor Fabricating Inc., Orton, Ontario.Dr. Vaage can be contacted by email: nutrition@jaylor.com.