Under Wraps: Keeping Your Investment Secure 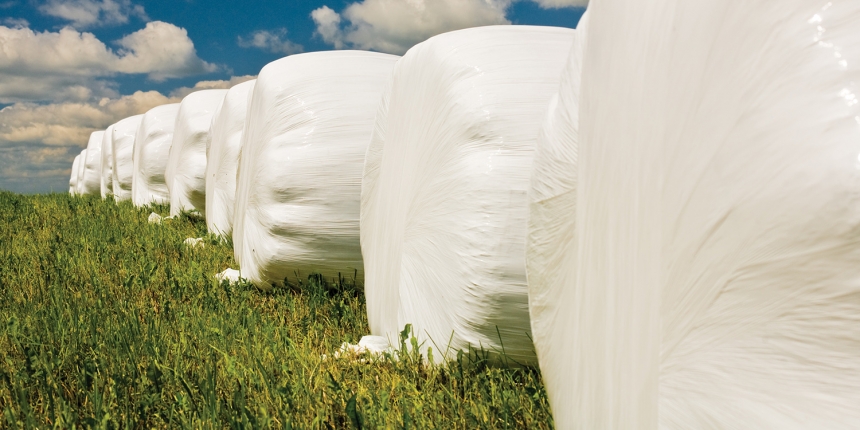 Under Wraps: Keeping Your Investment Secure.

The bale wrap industry has seen a variety of product evolutions and innovations over the years, all with the goal of helping producers establish a solid foundation for keeping their bale operations as effective and successful as possible considering the mitigating elements can affect bale quality including rodents, UV rays and precipation.

For example, at Protexia, the company has worked closed with its manufacturer for more than 30 years, participating in various product development activities to enhance their products. According to Benjamin Omet, president at Protexia, they have recently worked on inventing a bird and rodent repellent bale wrap.

“The non-toxic (not a pesticide) additive present in the plastic acts as a deterrent for birds, mice, rats, raccoons and similar species,” Omet says. “We have gotten numerous awards and worldwide recognition specifically for this product.”

Protexia’s bale wrap films are made with high-quality virgin raw material. The stretch and mechanical characteristics of our films also includes a unique tack on the film, as Protexia makes its own glue in-house, specifically designed to withstand challenging outdoor weather for months.

“We do not use a pharmaceutical-grade glue, and the wrap will not peel out of the bale and create ‘tails’ flapping in the wind,” Omet says. “We only carry one brand – RaniWrap – and we add our proprietary repellent additive to RaniWrap.” They also offer three thicknesses: 0.9 mil, 1 mil, and 1.3 mil in five colors and four widths including 10,” 15,” 20,” 30”.

When producers are selecting a bale wrap, Omet says the main thing they need to consider is that the wrap needs to adapt to their specific operation. Do they inline wrap or do they individually wrap? Do they wrap round bales or square bales? Does the hay have really “pokey” or sharp stems? Also what part of the country are they in?

“If they are in the southern states, we would not recommend getting the black or green bale wraps, because the darker shades retain more heat, which in turn can diminish the nutritional value of the feed,” Omet says. “For sharper stems or big square bales, we recommend going to the 1.3 mil film, a bit stronger with less chances of ripping in the angles. On round bales, a 1 mil is usually the way to go, and on smaller, smoother rounds, a 0.9 mil can suffice. All rolls have mostly the same weight, so a thinner film will have more feet on every roll.”

Most manufacturers will highlight the number of layers that make the film, including monolayer, three layers, five layers, seven layers. As a rule of thumb, Omet says it’s important to remember that monolayer films have a stretch and tack capacity that will be much lower and forage producers will need to apply more plastic onto each bale to preserve them efficiently.

“The number of layers depends on the machine used to manufacture the film, but it does not say anything about the type of raw materials used,” Omet says. “To give you an example, there are hundreds of different grades of virgin polyethylene that could be used to make the bale wrap.”

A key innovation in the bale wrap arena is the bird and rodent repellent wrap. For decades forage producers had no solution.

“Some farmers spray painted their wrapped bales, some prefer to stack their wrapped bales near a busy road so cars keep these pests away,” Omet says. “But the truth is they were at their mercy. If rats make a bunch of holes at the bottom of all bales, their hay will be ruined. The cost of plastic is cheap compared to what it protects. For roughly an extra $1 per bale (compared to a non-repellent wrap) you can have that extra protection. This is an inexpensive cost that all forage producers that use bale wrap should include, because the risks are just too big when it comes to losing a whole cut for example.”

Blue Lake Plastics also is a national distributor and retailer for a full range of net wrap products. The company also works directly with its manufacturers to make sure the company’s wrap products are designed to work for their customers and their equipment.

Chris Kerfeld, owner of Blue Lake Plastics says the key things a producer should keep in mind would be a good consistent product that works well in their equipment.

“Blue Lake Plastics has customers in all regions of the United States, our products are tested in crops such as, alfalfa, grass, corn stover and soybean stover and cotton. Our products have to work well in all situations and conditions,” Kerfeld says. “Equipment manufacturers are constantly changing and updating their products. Blue Lake Plastics is also in contact with our manufacturers in keeping up with new technologies. Higher grade resins and netting designs are always on top of the list.”

As an Iowa farmer, Jay Gunderson, founder of ShurWrap experienced first-hand the challenges of baling corn stalk biomass. Gunderson sought a supplier to manufacture a net wrap that stretches tightly around bales and cuts off cleanly. This quest led to the origin of ShurWrap net wrap.

"The quality of the net wrap a producer chooses is very important. The net wrap they choose must meet their very specific needs until that bale is needed. It will vary based on  what crop they are baling, how long they need the wrap to hold the bale together and what they need the bale for, such as feed or bedding. Producers want to choose a wrap that will hold the crop they are baling as some crops are harder to hold  than others," Gunderson says.

"A rancher or producer needs to determine what are the important qualities they're looking for," Gunderson says. "Identifying and prioritizing those qualities as part of the decision is very important. For many, it will likely come down to what is the best value for the individual's operation, but making the decision based on the best value for price paid can be challenging.” Because ShurWrap recognized that net wrap is an important investment for producers, ShurWrap net wrap is produced with guaranteed roll lengths, to ensure producers are receiving what they are paying for. ShurWrap is available in 48", 51", 64" and 67"  widths, and 7000’ - 11,800’ lengths, is formulated with U/V protection and is weather resistant.

ShurFilm bale film  is a new high-performance, seven layer agristretch film. The formulation of ShurFilm is designed to be used under all conditions and is suitable for all types of wrappers. ShurFilm bale film is used for wrapping round and square high moisture bales primarily used for feed. This seven-layer product is ideal for use in changing temperature en- vironments throughout the wrapping season with minimal adjustments to the wrapping equipment being used.

Experts agree that one of the most common mistakes producers make is to try to find the cheapest bale wrap. “They have to apply more wrap so they would have ended up saving money getting a higher quality plastic, or they try to apply the same and they have some mold issues,” Omet says.

Kerfeld agrees that if there is a common mistake that ranchers and producers make is making a decision based on price. “The old saying that ‘you get what you pay for’ still holds true,” Kerfeld says. “Good service and a product that is consistent in quality year in and year out is what Blue Lake Plastics uses as a business model. Those two simple rules are what made our company it is today, and will carry use into the future.”