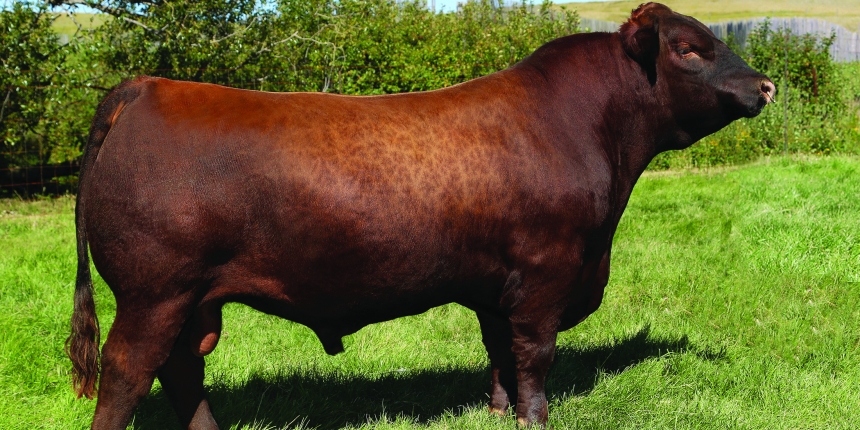 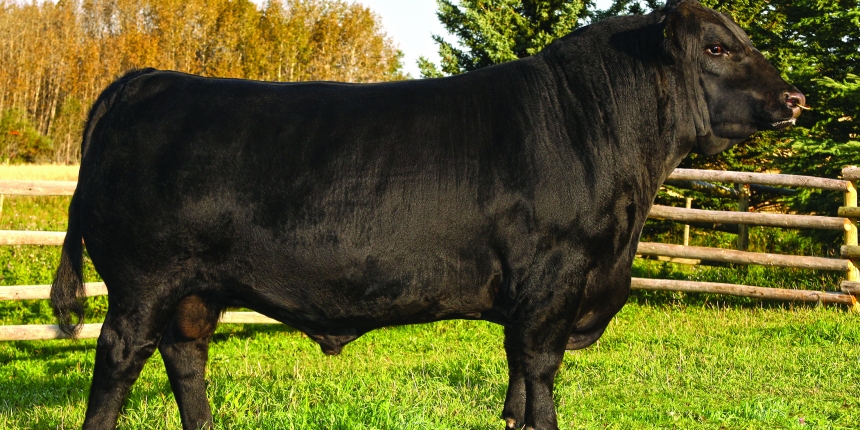 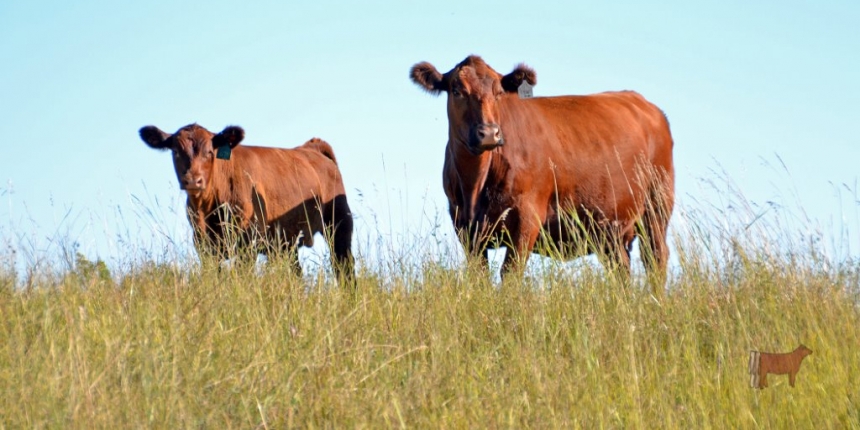 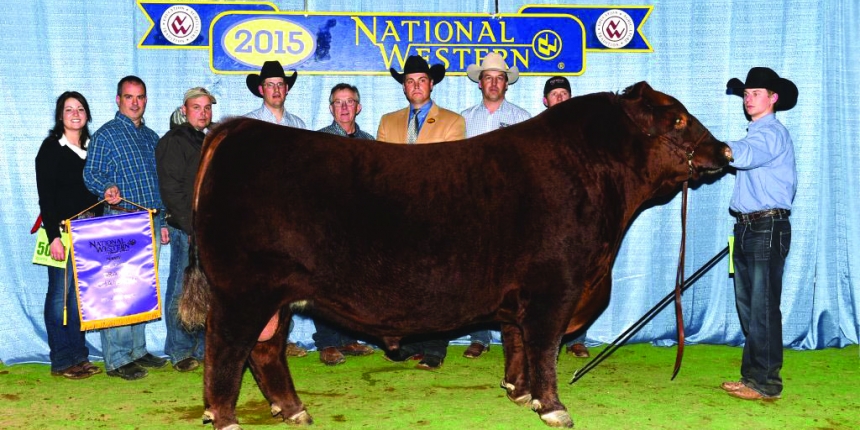 As a family-owned and operated ranch in Viscount, Saskatchewan, Triple L Angus Ranch prides itself on embracing the time-honored tradition of family ranching, while offering prize-winning Angus cattle for production. 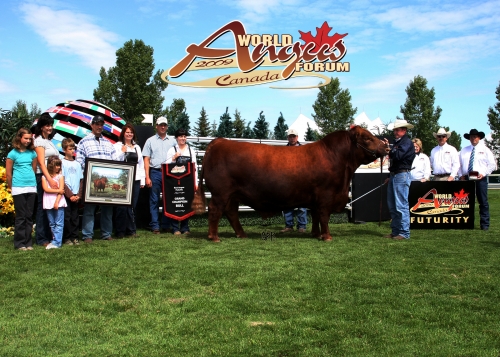 With one full-time employee and a few part-time employees, Randy Tetzlaff, owner at Triple L Angus, manages over 5,000 acres of grain farming and runs approximately 150 purebred red and black Angus cows. Situated on the farm his grandfather started in 1918, Tetzlaff has followed in the footsteps of his grandparents and his parents, who had a large commercial herd when Tetzlaff was young.

Before incorporating purebreds into their ranch, Tetzlaff and his family ran a small commercial herd. Today, his wife, Kim, and their three children—Brookelynn, age 18, Connor, age 15 and Allyson, age 12—continue this long-standing family farming tradition.

“We purchased our first purebred black cows in 2000 and began incorporating red Angus due to demand in 2006,” Tetzlaff says. “We have been raising cattle to try to best suit the demand for our area.” Specifically, Tetzlaff started his black herd from 2M Angus and Elliott Angus and he started his red herd from Geis Angus and KBJ Round Farms.

In the ranching industry, longevity is key and that is one of the features that Triple L Angus Ranch celebrates in its bulls. As Tetzlaff explains, his bulls’ longevity means they have great feet, are structurally sound and offer high fertility rates.

“The same criteria also is found in our females, all of whom offer top-end udders and the ability to calve on their own each year,” Tetlaff says.

From the beginning, Triple L Angus Ranch has focused on using the best herd sire that they can find. While they do some inseminating, most of their breeding services are natural to the herd sires. The result? They have earned accolades aplenty for their Angus herdsires, along with a wealth of awards at various cattle shows and exhibitions throughout the region.

“We’ve also had numerous show champions and class winners at various shows in Saskatchewan over the years,” Tetzlaff says. “We are very proud to show off our herd.” 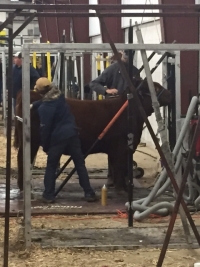 As a result of their herd’s award-winning status, Triple L Angus hosts an annual Impact Bull Sale, marketed by T Bar C in Saskatoon. Held the last Saturday of March, with J&S Cattle and Macavoy Charolois. In addition to selling some of their females at other select sales and privately, Tetzlaff also sells some of his females primarily at the Touch of Class female sale in Saskatoon each December.

“We are very proud of the local support and the number of repeat buyers we have at the yearly bull sale,” Tetzlaff says. “We currently are getting more into the embryo side of the business and recently purchased a group of commercial animals to be recipients, ”to further enhance our top end genetics.

Award-winning herd bulls and females aside, Tetzlaff embraces the family-owned component of his ranch. “It’s awesome to check the cows with my wife and have our kids help with chores and learn the trade. It truly is second to none,” Tetzlaff says. The ranch’s sole full-time employee, Cam Bentley, is considered to be part of the family as he has worked on the ranch since 2000 and helps with all aspects of the grain and cattle farming.

“As the kids get older, their responsibilities have increased yearly,” Tetzlaff says. “Without the great wife I have, running with the kids, keeping the house and yard in shape, making numerous harvest meals, watching gates while I feed—none of this would be possible. She’s my rock.”

Having grown up in the farming world, Tetzlaff’s favorite part of the cattle industry is the wonderful people he’s met along the way.

“I’ve had many great partners and made many lifelong friends,” Tetzlaff says. “This industry is full of the best kind of people you will meet any where. I never was involved in 4H when I was young and so I knew very little when I jumped in, but the learning curve was made much easier from the help of great people.”

But at the heart of the success of Triple L Angus Ranch is Tetlzaff’s respect for and interest in the animals themselves, and the entire breeding process. “I love calving, as each calf is unique in its own way and each mating is different as well,” Tetlzaff. “I love to see the result of different sets of sires and dams at calving time, and of course, I love the general rush of having an animal in the show ring or watching the kids fit and show as well at 4H events.”

Tetzalff’s vision for his ranch and for the industry in general is positive. “The industry is going to stay strong in our area,” Tetzlaff says. “The quality of everyone’s herd seems to be on the rise as people realize there is a premium for top-end calves—whether it be at the market or in the replacement herds.”

The region in which Triple L Angus calls home features plenty of marginal land, feed sources and mixed farming—all of which is what keeps a farm afloat. To further the growth of his ranch, Tetzlaff relies on the Internet for marketing and promoting his herd, with many of his sales occurring online via his web site and the Triple L Angus Facebook page.

“For the future I hope the next generation, my children, continue where I leave off,” Tetzlaff says. “The interest and love of cattle seems to be there and I am astonished by how fast they pick things up. As always there are opportunities to learn and improve the herd and although I’m sure not everything will go according to plan, we will thrive to raise the best quality seedstock we can. But most importantly, we want to be remembered and known as good honest people with good honest cattle.”