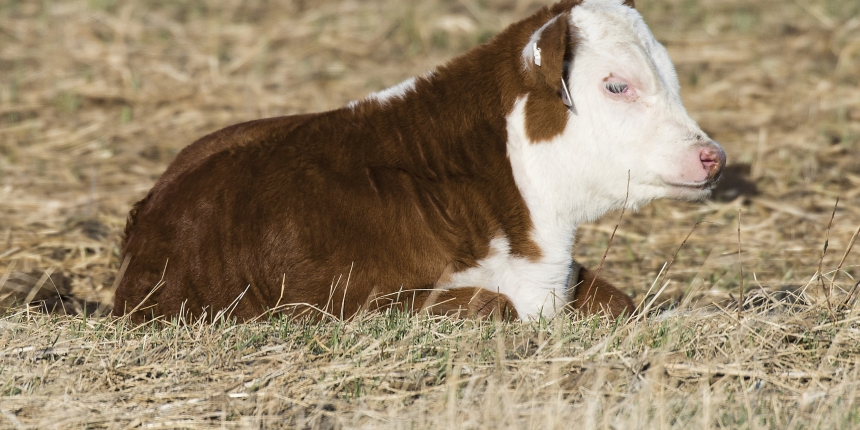 Diarrhea is the most common illness in young calves and the number one killer during the first weeks of life. It’s generally not the gut infection that kills a calf, but dehydration. Early treatment and rehydrating the calf can make a big difference in the outcome.

Some years are worse than others for scours and there are many causes.  Intestinal infection and diarrhea can be due to certain kinds of bacteria, viruses or protozoa.  Whether or not calves get sick often depends on multiple factors including exposure (contact with pathogens), and level of immunity.  Good weather, clean ground, and stress reduction (which includes protecting calves from bad weather, along with not confining the animals too much during calving season) can help reduce incidence of scours.  It’s important for producers to talk with their local veterinarian to know what the common problems might be and treatments that work for specific strains of various pathogens.

Producers often want to try to figure out the cause of diarrhea, to know how best to treat the calf, but it’s not easy to tell just by looking at the calf or the feces.  “There are various test that people have come up, with the intent of enabling producers to get a feces sample to do on-farm testing, but none have been very effective,” says Steve Hendrick, DVM (Coaldale Veterinary Clinic, Coaldale, Alberta).

Calf age can give a clue.  “Bacterial scours, particularly E. coli, might occur within the first couple days of life.  We tend to see viral scours at 1 to 2 weeks of age.”

Protozoal pathogens have longer incubation time; cryptosporidiosis generally won’t occur until a calf is at least 7 to 10 days old or older, and generally won’t show up until about 2 weeks of age.  Coccidiosis takes at least 3 weeks (closer to 4 weeks) before enough intestinal damage is done and the calf has diarrhea.

“The challenge in trying to diagnose by age is that there’s usually some overlap; a calf that’s 2 weeks old might have viral scours and concurrent bacterial infection.  It also depends on how early in life a calf was exposed and infected,” Hendrick explains.

Color and consistency of feces can be a clue, but not always.  If there’s blood in the feces we suspect coccidiosis, but these calves may not always have bloody diarrhea.  The feces may just be brown and watery.  With some kinds of intestinal infection the feces may be gray, yellow, or greenish.

“We can’t tell what type of infection it might be, just by the color.  If there are multiple calves with scours, it may be worth having your veterinarian take a fecal sample to see what the cause is—if it might help you treat additional cases more effectively.  When we get into a wreck, however, there are often multiple ‘bugs’ involved.”

Unless you know what you are dealing with, it’s best to just administer adequate fluids/electrolytes and consult your veterinarian for advice on additional treatment—such as a broad-spectrum antibiotic if there’s a chance it might be bacterial or complicated by secondary bacterial infection.  “Producers often reach for a scour bolus, because it’s easy, but it doesn’t always help.  Electrolytes, and keeping the calf hydrated, are more important,” says Hendrick.

If there is too much gut damage, the calf can’t absorb oral fluids and electrolytes and he needs IV fluids.  Usually if the calf can still stand and move around, he can be given oral fluids, but if he’s too weak to stand, and no longer has a suckle reflex, oral fluids won’t do any good.  The only way you will save him is with IVs—administered as soon as possible.

Derek Foster DVM, PhD (Assistant Professor of Ruminant Medicine, North Carolina State College of Veterinary Medicine) says that if the calf can absorb oral fluids, you should provide at least 2 quarts of fluids daily (split into at two feedings), in addition to whatever milk the calf is drinking.  Compared to a dairy calf fed by bottle, in a beef operation where calves are with their mother, it’s hard to know exactly how much the calf is actually suckling.”  If the cow has a full udder, however, you know the calf is not suckling at all or not suckling enough.

If the calf is bright and still nursing, 2 quarts of additional fluid and electrolytes should correct the dehydration, along with the milk.  In years past, veterinarians recommended holding calves off milk for 24 hours when calves had diarrhea, simply feeding electrolyte solutions, but today this is no longer advised.

“The old philosophy was that feeding milk to a calf with diarrhea would likely make the diarrhea worse, but more recent research suggests that milk doesn’t make diarrhea worse.  It helps the calf maintain energy and body weight while recovering.  The calves we hold off milk tend to lose weight.  We prefer to keep them on milk, if they are able to nurse the cow,” says Foster.

If the calf is still getting milk, however, bicarbonate interferes with digestion of milk.  You can use bicarbonate, but not at the same time the calf is getting milk.  With a beef calf that’s still nursing the dam, you have less control over how soon he might nurse after you gave the oral electrolyte.

“Some products contain acetate as the alkalizing agent instead of bicarbonate, so that’s a preferred ingredient for a calf that’s also drinking milk at the same time,” he says.

Sometimes producers want to know how to tell whether a calf needs fluids.  “If you can catch the calf, it’s probably worth continuing to give oral electrolytes.  After the calf is feeling better and bouncing around the pasture and hard to catch, he probably no longer needs additional fluids.  If he still has diarrhea and is a little depressed and moving slow, continue treating with fluids and electrolytes,” says Foster.

“For most cases of diarrhea, oral electrolytes once or twice a day in addition to milk they are drinking from mom will be enough to keep up with fluid losses.  This gives them the electrolytes they need, and helps rehydrate them.  Hopefully within a couple days they will be bright and happy and bouncing around again and hard to catch, and won’t need any more treatment,” he says.

In serious cases (the calf is weak and not nursing, but not yet to the point of needing IV fluids), electrolytes and oral fluids should be administered more frequently, preferably every 8 hours.  The cow and calf should be in from the pasture where the calf can have more intensive care and shelter, and you may need to milk the cow once or twice until the calf feels well enough to suckle again.

“If the calf is too weak to stand, however, the calf will need IV fluids and glucose because blood sugar has dropped so low.  Some of those calves also need antibiotics.  In general we try to avoid treating routine diarrhea with antibiotics because supportive care is often all they need.  As long as we can keep them hydrated, their immune system can take care of the pathogen—which is often a virus (like rotavirus or coronavirus) or protozoa (cryptosporidium or coccidiosis),” says Foster.  In these situations an antibiotic isn’t going to help; the calf simply needs supportive care.

An electrolyte product should be mixed with the appropriate amount of water to ensure that the calf gets the right amount of sodium.  “If there is inadequate water the calf ends up with too much sodium and this can also be a problem.  These things need to be in balance.  It’s also important that the calf receive something to help correct blood pH if it’s a little acidotic.  Unless we do bloodwork on these calves, we don’t know for sure how acidotic they are; we’re guessing.  Most of them are somewhat acidotic and we need to use a product containing bicarbonate or acetate,” he says.

The earlier you treat the calf, the quicker he will bounce back, and the fewer treatments needed.  “If we can reverse dehydration before the calf needs IV fluids, and keep him hydrated during the diarrhea, usually we can don’t have to resort to more intensive treatment,” says Foster.  It pays to closely monitor baby calves, and assess their health.  Any calf off by itself or dull needs closer attention.  Often the first clue is a calf not feeling up to par and not nursing—even before he breaks with diarrhea.  If the cow has a full udder, this is reason to check her calf more closely to see if he’s dull.

If the calf is already scouring and dehydrated, he’ll usually be fairly easy to catch, especially if you are tricky and don’t scare him (or mom) as you sneak up on him.  How you give the oral electrolyte fluids is the next question.  Many beef calves won’t suck a bottle because they’re not used to being handled by people; they are scared and stressed, and generally off feed, or don’t like the taste of what you are trying to make them drink.  It’s easier, faster and less stressful for you and the calf to administer the fluids via esophageal probe.

“This works well as long as it’s done properly, and the best way to make sure we give adequate volume of fluid.”  The calf should be given fluids until he is strong again and no longer dehydrated.

“One way to asked how dehydrated the calf is (besides how depressed he is and whether he is willing to nurse) is by checking the eyes.  As a calf gets more dehydrated, the eyes appear to sink back in the head.  We assess the gap between the eyeball and inside corner of the eye.  In a normal calf, the inside corner, eyelid, third eyelid and eyeball should all be together and touching.  As the calf becomes dehydrated, the eye starts to recess back into the head (the surrounding tissues are short on fluid) and there’s a gap.  The bigger that gap, the more dehydrated the calf.  This is one way to determine whether it’s a mildly dehydrated calf or severely dehydrated calf.  This helps us decide if we can get by with routine treatment of 2 quarts of fluids once a day or if we need to give oral fluids more frequently, or if we need to give IV fluids,” says Foster.