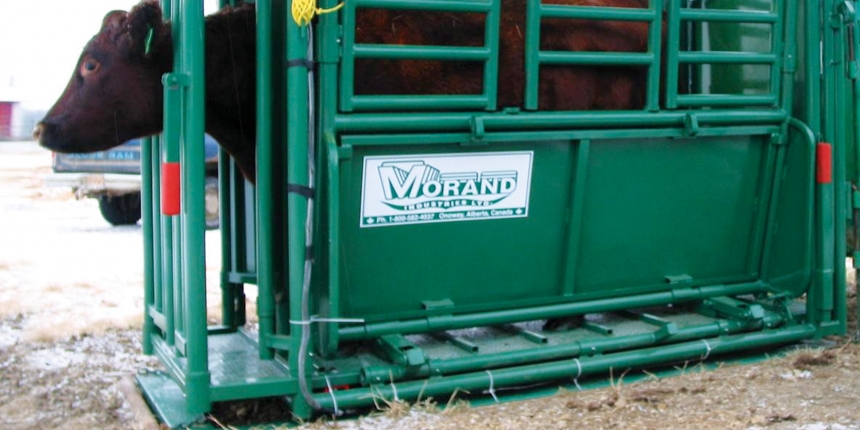 Morand Industries, Ltd. is a small company based in Onoway AB, Canada, that more than 35 years ago saw a need for better and heavier built livestock handling equipment. According to Terri Gerley at Morand, the company has focused its attention on cattle and bison systems, specifically.

“We build self-catching auto headgates for beef cattle and scissor catching head gates for bison and rodeo livestock. It is simple to use, easy for adjustments and virtually fool proof,” Gerley says. While the self-catching headgate has needed little alterations over time, Morand’s scissor catching headgate for bison and rodeo livestock, has changed considerably over the past 15 years. The equipment evolved to be taller, to open wider and close narrower, as well as being more user friendly.

As Gerley explains, not only does Morand Industries build two styles of headgates but they manufacture hydraulic headgates and squeezes as well.

“On our manual cattle squeeze, behind the self-catching headgate, we have a ‘shoulder holder catch,’ that was designed and patented by Dr. Barry Ross, a veterinarian out of Dawson Creek, BC. When the neck gates are pre-set to the width of animal you are working with, our self-catching headgate, catches every time. That’s when you will pull down on the shoulder holder handle, which helps stabilize the animal’s head. It does not extend the neck, it just holds the animal still without causing further stress. Our head gate is often copied but never matched.”

This level of innovation in headgates comes after years of producers using earlier style headgates, including the wooden stanchion type. As Steve Langrell, product group manager at Arrowquip, explains, this style is still used today, albeit some are fancier versions.

“They are largely used in some calving pens and in dairy barns. From there, better manual headgates were created, such as scissor type with a ratchet,” Langrell says. “Then, self-catch headgates became very popular in North America, leading up to the development of hydraulic headgates. Manufacturers then began to add different forms of head control on the headgates.”

Arrowquip currently offers two styles of manual head gates. One is specific to the company’s calving pen, and is a simple self-catch which works in conjunction with a calving pen and the other is the Q-Catch, seen on all of Arrowquip’s manual squeeze chutes.

“We also offer two styles of hydraulic headgates. With these styles, we have the ability to service everyone from ranchers with small herds to the largest feedlots with heavy-duty headgates, made to handle those demanding environments,” Langrell says.

Brett Peers, sales manager at Hi-Hog Farm & Ranch Equipment Ltd, a company that supplies squeeze chutes for both cattle and bison, in both manually and hydraulically operated models,’ offers chutes that are wider (32” inside), accommodating bigger animals, and they are all parallel axis squeezes, meaning they help keep the animal centered and balanced in the chute while squeezing evenly from both sides.

“All of our squeeze chutes can be exited from all four sides, if needed for sorting or emergency scenarios. Our manual cattle chute is available with the self-catch headgate, which is originally what our chutes became so well known for, as it is most definitely the best headgate in the industry,” Peers says.

Peers points out that over the past decade or so, there has been a call for better control of the head and neck of the animal, allowing for safer accommodation of neck injections, tattooing, ear tagging, and any other procedure where immobilizing the head is beneficial. This is what originally led to the development of Hi-Hog’s “Neck Extender”, which was developed to work in unison with the company’s self-catch headgate to simultaneously catch the cow/bull in front of the shoulders and behind the head, which extended the neck area for easier access and helped immobilize the head somewhat.

“Aside from the headgate options, the main changes to the chute itself have been based around ongoing efforts to make the chutes quieter, and adding as much access to the animal as possible, while keeping the chute safe for the animal and handler above all else,” Peers says. “More recently, this control has been stepped up another level, with the “Head Holder”, which affords even more control of the head, without the drawbacks of the neck extender, by only being worked when needed. It eliminates the extra effort of operating the extender with every animal.”

Considerations To Make
“When producers are choosing their headgates, Gerley suggests they need to base their decision off of what they’re working with, cattle or bison, horned animals versus no horns, cows, bulls or calves.

Peers adds that it’s important to ensure the headgates offer adjustability to fit all sizes of animals, safe and simple operation (too many bells and whistles are usually not a good thing), the ability to release a distressed animal under pressure, lots of access to all parts of the animal while still being a safe chute to operate. and be sure to make sure the headgate cannot choke the animal.

“A good self-catch headgate is like having another person at the squeeze, but it’s more reliable,” Peers says.

A common mistake the team at Morand sees producers make is allowing their budget to dictate their equipment needs.

“When you find a lower price deal, it may make the budget happy, but you may be disappointed with poor quality, lesser job performance, safety hazards for your staff and livestock, as well as the potential financial loss in the end,” Gerley says.

“If you use a hydraulic headgate, the chances are high you will never go back to a manual. When comparing hydraulic to manual, they are just so easy to use and safe. A rough rule of thumb I like to use is if you have 250 cows or more, you should seriously consider hydraulic.”

One of the things you should look for in headgates are a minimal number of moving parts. Some manual headgates can get quite stiff over time. That’s why Langrell says producers need to pay attention to the locking mechanisms and see if they are reliable and stout, as they take a lot of stress. Also make sure a headgate provides a wide opening. Some tend to be on the narrow side, and this will really affect your flow with bigger cattle.

“And be careful of headgates that are yoked. This type only works well with people that are processing cattle very fast and are experienced and are fully aware of what to watch for in this style,” Langrell says. “The reason I am saying this is because many cattle have been killed this way, as when they go down in the chute, the yoke can cut off their blood supply. Unless you know what to watch for and are observant, that animal will quickly die. This is a silent killer as the cattle don’t usually make any noise when this happens. You can only observe it by how they are twitching and their eyes. Also make sure your headgate doesn’t have any holes big enough for an animal’s foot to get out. There have been many busted and injured feet over the years in chutes with foot traps.”

“Remember, good equipment holds its resale value and often pays back your initial investment over time with reliability and a longer lifespan,” Langrell says.

Headgates also are not maintained as well as they could be. It doesn’t have to be complicated, but a little attention goes a long way in keeping it running smoothly.

“I have seen many headgates that are a lot stiffer than they need to be, and this can be very fatiguing,” Langrell says. “Finally, if you have larger herd numbers, I recommend at least enquiring into hydraulics, or trying them out for yourself. I am confident you will be pleasantly surprised with how it makes your job so much easier.”

It’s important to note that a lot of producers fall victim to being sold on all the bells and whistles on a chute, that are usually very overrated and not overly functional in a lot of situations. “Many times, these are bolted-on, plastic parts that are not strong and most of the time won’t be used very much,” Peers says. “In terms of operation, let the self-catch headgate do the work. You should not need to be anywhere near the headgate when the animal catches itself, unless you are working with pets. Another bad habit is to train your animals to leave the chute from any exit but the front on a regular basis. The side exits should normally only be used in an emergency situation, or for sorting if needed.”

Looking ahead, Langrell estimates that the improvements to the mechanics of headgates will come in small increments.

“The industry has made great strides in head control, and I see them striving to get better still. We also have made strides in hydraulic headgates, especially giving smaller producers more options as some of the heavy-duty headgates for feedlot use are not necessarily needed in this application,” Langrell says. “I think the thing for producers to keep their eye on is technology. This is the next big thing. In regard to headgates, there is work being done so that headgates can close and catch the animal without human intervention, all done with the use of sensors.”