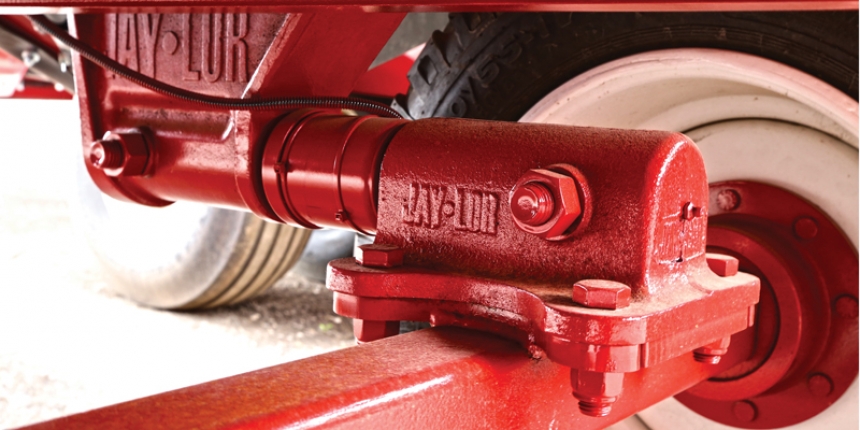 The objective of feeding a total mixed ration (TMR) is to provide a consistently uniform mix with the intended ingredient and nutrient composition, across the entire length of the feedbunk, with every batch. The scale system on the TMR mixer determines whether the correct amount of each ingredient is added to the mixer, yet its operation and accuracy is often taken for granted. In this issue, we will describe how the TMR mixer scale system can be a source of error in TMR production, and present some simple tests you can perform to determine its sensitivity and accuracy.

Scale system design and integrity: Today’s scale systems generally consist of multiple load cells attached to an indicator, or display, which is a both a power supply and micro-processor that energizes the load cells as well as interprets the electronic signal that returns from them. The accuracy of such a weighing system is ultimately determined by the accuracy and number of the individual load cells, or weigh bars as they are often called, that are used, and the precision and integrity of the mounting system. In simplistic terms, the theoretical maximum accuracy of a scale system is calculated a function involving the summing the errors of the individual load cells in the system. Thus scale system accuracy decreases as the number of load cells and their capacities increase, and the quality of their mounting systems decrease.
Thus for this system to work as expected across the full capacity of the scale system, two things are essential:
1. each load cell must perform to its design specifications and be calibrated, or matched, to work with the other load cells in the scale system, and
2. each load cell must be mounted correctly; the mount must be installed correctly, conform to the design specifications, and not be malformed, worn or otherwise damaged.

Scale system accuracy: Load cell performance can conceivably vary with design, quality of materials and manufacturing process, according to an engineer at Digi-Star, “most mobile load cells and scale systems should be capable of weighing to within +/- 1/4000th of their individual and/or combined capacities” when at rest.
The following illustrates what this means. A 500 cu. ft. mixer might have three weigh-bars with a combined capacity of 25,000 lbs., a 10,000 lb. bar at each axle and one 5,000 lb. bar at the hitch, to cover the combined weight of the empty mixer (12,500 lbs.) plus the weight of a full load (12,500 lbs.). Thus, the potential accuracy of the weigh-bar at the axle would be +/- 2.5 lbs., and the mixer as a whole would be 6.25 lbs., assuming flawless mounting.
In practice, a more reasonable potential accuracy for an installed weigh-bar appears to be closer to +/- 5 lbs. for a 10,000 lb. bar, or 0.05% of full scale, and twice that for the difference between two bars. The capacities of the load cells for your particular mixer should be specified in the user manual or be available from the dealer or manufacturer.
Note that the calculations above suggest an accuracy that is much greater than manufacturer specifications usually indicate; this may be because published values are for the sum of a set of maximum values for different types of errors across the full range of capacity for the load cell. It is also possible that published values may also be somewhat inflated (they are expressed as a maximum) to ensure they are easily met if tested.

Scale system testing: For the most part, today’s scale systems operate trouble-free but need to be checked to determine their sensitivity and ensure they are weighing accurately across their full weight range. This can be done as follows:

Sensitivity test: Used to determine the minimum amount of weight change that can be detected.
• Weigh one pound of grain, or something comparable,
into individual zip-lock bags using a kitchen gram-scale; about twenty units should be sufficient.
• Set the scale on your TMR mixer to read in
one-pound increments.
• Gently add successive one-pound bags to a specific locations on or in your mixer tub and record the weight shown on the indicator after each addition.
• Repeat the same exercise in various locations, as well as when the mixer has different amounts of weight in it.
• The maximum deviation between the weight added and that observed on the indicator is a reasonable indicator of the sensitivity, or potential error, in lbs., of the scale system.

Accuracy and precision test: Used to determine the weighing accuracy and precision of each weigh bar and the mixer overall.
• Weigh someone on a bathroom or other scale to accurately determine their weight.
• With the mixer empty, weigh that person repeatedly on the mixer by positioning them as close to directly over each load cell as possible; then, do the same thing with the mixer full, as well as partially full, if possible.
• Their weight over each weigh-bar should ideally not differ by more than about 5% (10 lbs.) from the average, and the average when empty should be similar to the average when full, while both averages should be close to your weight as determined on the reference (e.g. bathroom) scale.
• If the empty and full average weights are off by a similar amount, the calibration can be fine-tuned using the appropriate setting on the indicator to make the scale system more accurate, but it may be advisable to first have the system inspected by a qualified service specialist.
• If there is a large difference in weight between the load cells, especially between empty and full states, there may be something wrong with one or more of the load cells, or their mounts, and service will likely be required to ensure accurate weighing.
• Just because an individual weigh-bar outputs a different weight than the other weigh bars does not necessarily mean it is faulty; for example, the mount could be off a bit. Nor does it mean that the system as a whole cannot be reasonably accurate, as long as the difference is consistent and adjusted for by fine tuning the calibration.

Once the scale system is functioning as it should, the within batch variation of the TMR mixer, and potential for sorting, can be tested by comparing the sieving characteristics of a single batch of feed as delivered along the feedbunk. This will be the topic of discussion in the next issue of TMR Corner — “Because Nutrition Matters.”

Dr. Alan Vaage is a Ruminant Nutritionist with over 30 years
of experience in the beef industry, and currently provides technical support for Jaylor Fabricating Inc., Orton, Ontario. Dr. Vaage can
be contacted by email:
nutrition@jaylor.com.