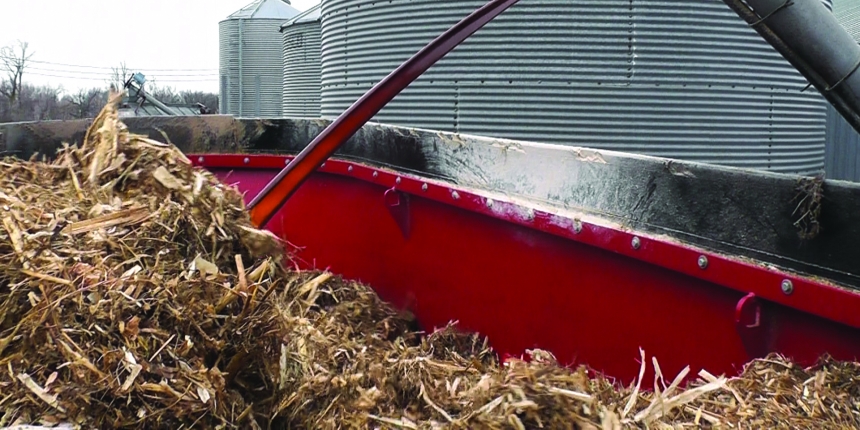 The practice of feeding corn stover to beef cattle ranges from well-established to unknown across North America. Corn stover is the plant material or residue that remains after grain harvest. It consists of dropped ears and other lost grain, the husks and cobs, and the leaves and stalks, and on average amounts to about one pound per pound of grain harvested, or 2.8 tons per acre for a crop yielding 100 bushels of grain per acre. As such, corn stover has proven to be a valuable feed source in all segments of beef production, especially the cow-calf sector. And, its potential is increasing as corn production continues to move north-west with improved varieties adapted for regions with shorter growing seasons and the continuing high cost of forage production for winter feeding.

Composition and nutritional quality
The composition of typical corn plants at maturity are given in Table 1. The amount of corn grain remaining in the field after harvest will depend on the variety and weather, but will generally be about 3 to 5 bushels (170-280 lbs.) per acre, or 3-5 %, for Bt varieties, and potentially greater for non-Bt varieties. This means in the field corn residue will typically contain about 3% grain, 14% cob, 12% husk, 21% leaf and 50% stalk material.

The individual components of corn stover vary considerably in nutritional value (Table 1). Aside from the grain, the husk generally has the highest digestibility, while the leaf has the highest protein content. The stalk, which comprises about half the material, generally has low digestibility as well as low protein content. As a result, protein supplementation to a minimum of 8% dietary crude protein content (DM basis) maximizes both digestibility and intake and may yield a TDN (Total Digestible Nutrient) value typically as high as 54 percent, depending on the nature of the material consumed. When supplemented with alfalfa and/or byproducts such as distillers’ grains, nutrient intake can even be sufficient to support modest weight gains in calves being backgrounded.

Methods of use
The most common method of feeding corn residue has been grazing by cows after weaning, but it is also harvested and used for winter feeding, growing calves and as a source of roughage in feedlot rations.

Grazing: Two acres of corn residue will typically support one cow without a calf (mid gestation) for about 60 days of grazing, or a calf for about 30 days gaining up to a pound per day, provided adequate supplemental protein is provided. Typically, the cattle will eat any grain first and then the husks and leaves, while the cobs and stalks or generally avoided. This creates a risk of grain overload at turnout, followed by a significant decline in the nutritional value of the diet as grazing progresses.

Though the animal’s ability to select the most nutritious components of the corn residue improves animal performance, it also decreases overall utilization, which is estimated at only about 25 to 30 percent. Utilization can be further reduced by excessive trampling and adverse weather such as wind, rain and snow cover. Grazing of corn residues is further complicated by the need to control the movement of the cattle by fencing, as well as to provide sufficient access to water, at a time when there may be freezing temperatures.

Harvesting and feeding: Compared to other forages, corn residue is a challenge to harvest. But, when feed supplies are limited and prices are high enough, it is often worth the effort. In many areas it is as common to harvest corn residue for bedding as it is in others to harvest grain straw. There are even specialized attachments for combines, and specially designed balers for handling the task of harvesting corn residue.

One of the goals of harvesting corn residue is to increase the quantity or efficiency of corn residue that is utilized. As such, the resulting material will contain a lower proportion of grain and a higher proportion of cob and stalk material than the cattle would normally consume. This means that on average it will also have lower nutritional value, and should be sampled and analyzed to determine its actual nutrient content so that an appropriate supplementation or ration formulation strategy can be determined. One strategy for increasing the nutritional value of harvested corn stover is to cut the stalk higher from the ground at harvest so that less of the coarsest material is included in what is harvested.

A few years ago, the high cost of feed stimulated a resurgence of interest and research into alkali treatment of corn residue with products such as anhydrous ammonia or calcium-oxide. While these methods have been shown to be effective in increasing the digestibility of corn residue (up to 30 to 50 % on the low digestibility material), they have yet to be generally accepted as cost-effective.

Feeding harvested corn stover as-is in bale feeders or feed bunks is not normally recommended due to similar or even higher levels of selection and waste as experienced with grazing. Higher levels of intake and utilization can be realized by processing and mixing with other ingredients using a TMR mixer.

TMR rations
Palatability, intake and digestibility of corn stover can be increased by processing to decrease particle size, addition of water, and supplementation with protein and other ingredients. Processing alone has been shown to increase the intake of poor quality forages by as much as 30%. This can be done by grinding before the mixing process, but may be more easily done as part of the mixing process using a vertical TMR mixer, as long as it is effective at both processing and mixing.

It is important that particle size is reduced to the point that few particles greater than two inches remain so that selection in the feedbunk is minimized. The addition of water to the TMR mix helps to soften the corn stover and make it more palatable, as well as helps all the ingredients hold together and minimize sorting. Liquid supplements based on molasses and urea can be particularly effective for crude protein supplementation, as are byproducts such as distillers grains, which also supply supplemental energy.

An example ration (as-fed) for beef cows approaching late gestation could be as follows: 55.6% corn stover, 41.7% alfalfa-grass haylage (43% DM), and 2.8% 32% supplement (with urea, dry or liquid). For cows in late gestation and during calving, a ration containing 19.1% corn stover, 72.7% alfalfa-grass haylage, 7.7% distillers grains and 0.5% mineral premix would meet their nutritional requirements. In both cases, for best results, sufficient water should be added during the final mixing phase such that the final ration holds together and is resistant to sorting. When other forages are in limited supply or when prices increase, in such a way corn stover could become a cost effective ingredient in your TMR feeding program — Because Nutrition Matters.™