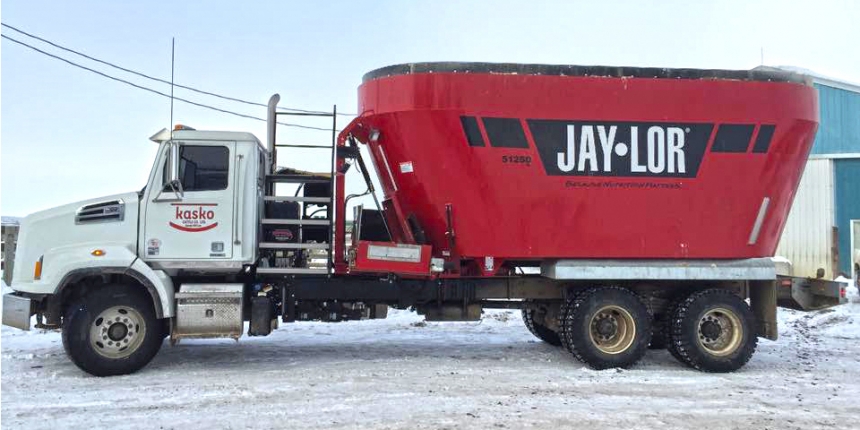 Spring calving season is approaching for many producers in North America and, especially for those in the more northerly areas, it is approaching the time when it is recommended to switch from a lower energy, mid gestation (non-lactating) maintenance ration to a higher energy, late gestation/calving ration. In this article we discuss considerations for timing that transition, and issues that might affect the formulation of this year’s ration given the high grain, low moisture, content of this year’s corn silage.
The calving ration: The benefits of transitioning to a higher energy and protein content ration in late gestation in preparation for calving are well established. These include: meeting the higher nutrient requirements for the final 6 to 8 weeks of fetal growth pre-calving, as well as milk production post calving; easier calving and reduced incidence of weak calf syndrome; better colostrum and milk production; healthier calves; higher calf growth rates; and better rebreeding. The recommended nutritional characteristics and anticipated dry matter (DM) intake of a beef cow calving ration are given in Table 1.

Calving ration formulation: Ideally, a calving ration can be formulated with ingredients raised on farm, but unless corn silage is available, some grain supplementation is usually required. This year, the high grain content and high dry matter content from delayed harvest will likely require some further formulation considerations. Table 1 gives the composition of the forages that are available for feeding on one farm this winter. Note the unusually high dry matter and energy content, and low protein content, of the corn silage. Fortunately, some high quality, second cut alfalfa hay was put up along with the usual first cut, which as usual was available in greatest supply. Example calving rations formulated using these ingredients are given in Table 2. 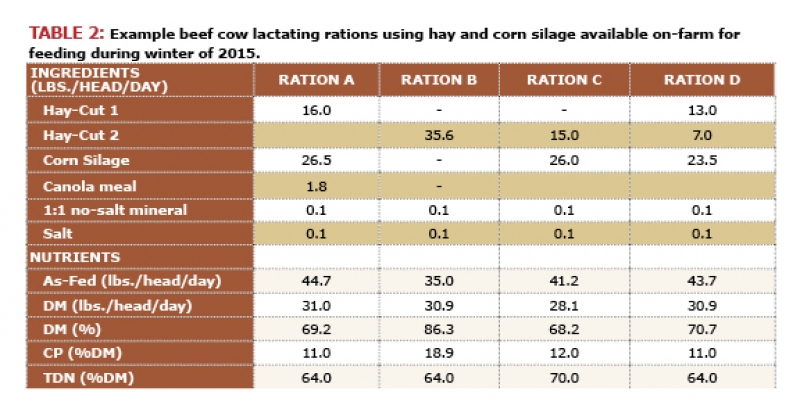 Option A: Normally, a blend of medium to good quality alfalfa hay or haylage and corn silage will make a good lactating ration by itself when balanced with minerals and vitamins. In the current case (Ration A), the unusually low protein content of the corn silage required significant protein supplementation (e.g. canola meal or equivalent) to balance the ration. The higher energy content of the corn silage permits a poorer quality hay to be fed to meet energy requirements than otherwise, but this will have to be balanced against an even higher requirement for protein supplementation. Failure to meet the protein requirement while feeding high energy corn silage can cause excessive fattening, impaired fetal development, calving difficulty, poor colostrum quantity and quality, weak calves and impaired calf health and growth.

Option B: Ration B demonstrates very good quality alfalfa hay, often referred to as dairy quality hay, will, by itself, meet the nutritional requirements of calving beef cows. It has the added advance that no supplemental protein is required, as it is supplied in excess. Though high quality alfalfa can be fed this way, this type of hay is often in too short supply on most beef operations to be the main feed, and also has a high opportunity cost, as it can be sold to purchase more cost effective ingredients off-farm.

Option C: A cost-effective alternative to Option B, could be to “limit-feed” a blend of the high quality alfalfa hay and the corn silage (Ration C). This type of ration takes advantage of the strengths of each forage to make a more fortified ration that could be fed at 90% of normal dry matter intake, without requiring protein supplementation.

Option D: As is often the case, Option D may be the most practical alternative. In this case a blend of the hays is fed along with corn silage such that energy and protein content, as well as dry matter intake, are optimized, all with on-farm ingredients.

Option D also demonstrates the value of using a vertical TMR mixer such as the Jaylor TMR mixer for feeding the cow herd. Rather than having to choose between feeding individual forages that by themselves do not meet the requirements of the beef cows, they can be combined in the mixer and processed along with other forages such as corn silage, as well as protein supplements and minerals when needed, to make a ration that meets the requirements of each animal for optimal performance. This year, if your corn silage is drier than normal, watch for separation of ingredients and sorting by the cows; if you notice problems, consider adding water to help the ration stick together — “Because Nutrition Matters.”

Enzyme technology is a hot topic in livestock...