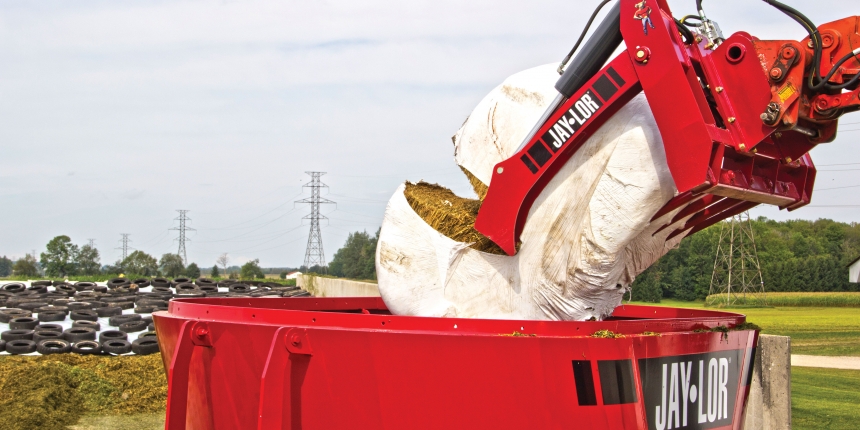 As we enter this year’s haying season, I encourage those who feed baled forage using vertical TMR mixers to consider how your choice of “bale-size” and other bale characteristics might affect the performance of your TMR mixer, or the size of mixer you need.

Traditional cow-calf feeding using bale feeders has generally encouraged the production of the largest bale a tractor could carry (e.g. 6'x5') to minimize the cost of production (string, wrap and/or labor), weathering (proportionate loss from the outside 6 inches) and handling (transportation and time spent feeding). With TMR feeding, there is value in shifting the focus to optimizing the batching of the feed and more closely meeting the nutritional needs of the animals. This may include decreasing the size of bales so that full bales can be fed, or bales of different quality can be mixed, or even so a smaller mixer can be purchased to reduce the capital cost of the TMR mixer itself.

To consider these options, it is important to understand that there are limits to the size of bale a vertical TMR mixer can handle that is related to its capacity (i.e. volume in cubic feet (cu. ft.), and to a lesser degree, the number of augers (i.e. single vs. twin).

Capacity is primarily dictated by hay density: On average, the density of long hay will be about 3 pounds per cu. ft.; once processed to below 6 inches in length, its density doubles to about 6 to 7 pounds per cu. ft. The ability of a mixer to hold the contents of a bale is thus determined by the weight of the bale on a dry hay equivalent basis, as opposed to the physical size or dimensions of the bale. For example, the loose hay from a 1000 lb. bale will occupy about 330 cu. ft. (1000 lb. / 3 lbs./cu. ft.). However, in the early stages of processing, the long hay will tend to bunch together at one end of the mixer, or the other. As a result, it is not uncommon to require up to 50% additional volume to keep it from spilling over the end of the mixer. Thus it normally takes at least a 450 to 500 cu. ft. mixer (e.g. 330 x 1.5 = 495 cu. ft.) to satisfactorily process a 1000 lb. bale of hay, though it can be done with a smaller mixer (e.g. 350 cu. ft.) if care is taken and/or a mixer extension is used.

Once the hay from the first bale has been partially processed and is settled around the auger, it is usually possible to add a second bale or equivalent amount of hay as was initially loaded into the mixer. This, however, is usually the limit to what it is practical to process at one time. If a third bale or amount of hay is added, it is usually necessary to wait until the hay from the previous bales is nearing 6 pounds per cu.ft. When this occurs, the lower density, long hay will tend to “float” on the denser processed hay, and as a result take an inordinately long time to mix with it and be delivered to the lower blades that do about 80 percent of the actual cutting and reduction in particle length. As a result, adding a third bale generally adds more processing time than that required for the first two bales combined, such that it is significantly faster to process and mix two smaller loads than to try to make the larger batch. It is simply a matter of physics.

Example round bale processing times: When creating TMR mixes, research with Jaylor mixers has shown that the first bale or amount of hay that fills a mixer to capacity on average adds only about 6 minutes to total mix time, whereas the second bale or amount of hay will add an additional 10 minutes, or about half again more than the first bale. The proportionately longer time for the second bale is required because it increases the total volume of hay in the mixer and the time for each particle to circulate from the top to the bottom of the mixer to be repetitively cut to the desired length. Adding a third bale adds from 20 to 40 minutes depending on the type of hay, more than twice the time required for the first two bales combined, as indicated above, and is therefore not recommended in most cases.

Factors affecting bale weight: The weight of hay in a bale will vary with its size and the density to which it’s packed. Standard balers are able to pack dry hay up to about 10 to 12 pounds per cu. ft. Newer high density balers, and especially those equipped with knives, can reportedly pack bales up to 16 to 18 pounds per cubic foot, and will need to be processed in proportionately larger mixers. Table 1 gives the recommended optimal minimum size of mixer for processing standard density bales of different sizes.

Bales that have been sufficiently pre-chopped in a baler may fit in the next smaller sized mixer because the forage density is higher and there is less tendency to spill out of the mixer. The hay equivalent (HE) content of wet bales (baleage) can be calculated as follows: HE = wet bale weight x (dry matter content (%) /100) / 0.85

Somewhat larger bales and amounts of wet forage, on a hay equivalent basis, may be able to be processed in a given mixer as the moisture content and greater total weight helps the forage settle into the mixer and reduces its tendency to spill out during initial processing. 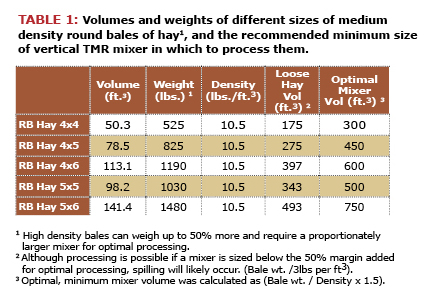 Effects of mixer dimensions and number of augers: The size of bale a mixer can reasonably handle may be limited by the physical space between the auger and the wall of the mixer. If the space is not large enough for the bale to drop into the path of the knives, it will tend to ride on the top of the auger and lip of the tub and take an excessively long time to get cut up. This limitation in smaller mixers is sometimes overcome by creating twin auger machines which have a relatively larger space between the two augers. However, the primary limitation of hay equivalent weight remains the same.

Overall, 300 to 400 cu. ft. vertical TMR mixers are best used for 4x4 bales, or equivalent amounts of long hay. Single or twin 450 to 600 cu. ft. mixers can generally handle most 4x4 and 4x5 bales, and perhaps lighter 4x6 bales. Higher density 4x6 bales and most 5x6 bales will usually require a twin-auger mixer with a capacity of 650 cu. ft. or greater.

Today, many smaller cow-calf operations are producing 5x6 bales for the reasons discussed earlier. This means they will require a large, twin auger mixer, to feed these bales in a TMR. Yet, they may only need to feed one or two 4x4 or 4x5 bales each day to meet the nutritional requirements of the herd. In these cases, it may be beneficial to produce smaller bales and/or consider using a baler fitted with knives, so that an optimal size TMR mixer can be used to both minimize the overall cost of the feeding system, and help better meet the nutritional requirements of the herd — “Because Nutrition Matters.”™