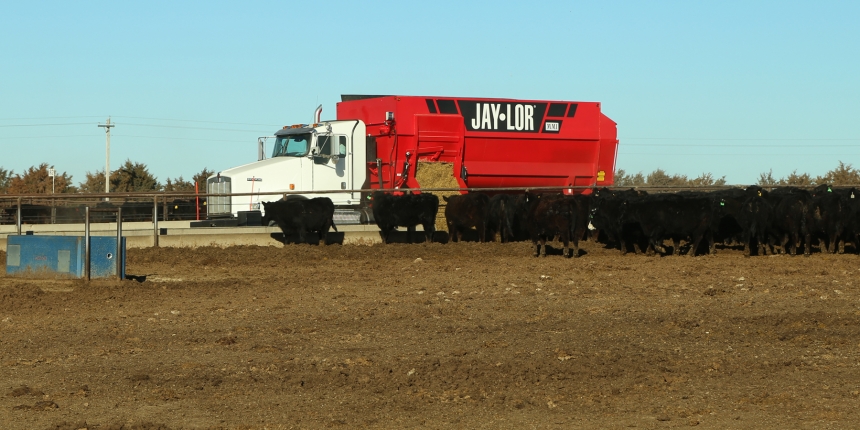 How to ensure TMR mix uniformity in the feedlot.

Feedlot rations require special attention to ensure they are uniform throughout the TMR mixer before they are fed.  Firstly, a single batch of feed is normally fed to multiple pens, creating the potential for pen-to-pen variation on top of the usual concern of within pen variation, especially if the ration differs appreciably from the start to the end of feed-out.  Secondly, when feeding high grain rations, relatively small variation in forage fiber content may have a greater effect on animal performance than energy content per se due to its role in maintaining stable rumen function. And finally, feedlots often use concentrated premixes, including liquids, which are added at low rates and contain important ingredients such as calcium, non-protein nitrogen (urea) and/or medication.

A common problem:  Recently, I was contacted in regards to a feedlot that was experiencing an increased incidence of bloat, and that mix uniformity tests based on the concentration of a medication were more variable than expected. And, this was the only mix uniformity testing that had been done.  Upon investigation, I learned that the feedlot was using a recently purchased 1000 cu. ft. mixer, that the concentrates were loaded first and forages were added last, in reverse order to the manufacturer’s recommendation, and that the medication was added into the completed grain mix in 10 US gallons of liquid supplement that was sprayed over an eight-foot area.  The sequencing of the ingredients had been recommended by the feedlot’s nutritionist who claimed experience showed it resulted in lower variation than using the manufacturer’s recommended loading sequence, which included adding liquids last during the final mixing phase. 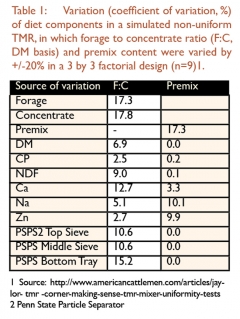 Standard feedlot testing protocols:  The feedlot above was using what has become standard practice for many feedlots when testing mix(er) uniformity; that is, evaluating the variation in concentration of a medication, or a specific premix mineral such as calcium, among a series of samples from a given batch of feed collected along the length of the feed-bunk(s) into which it was fed out.
The problem with basing one’s conclusions regarding the performance of a mixer solely on such a test, is that the method of adding the ingredient may have more effect on the results than the performance of the mixer itself.
In the above example, the medicating ingredient was being added as a liquid in an amount that volumetrically amounted to less than 0.2% of the total mix. Often, such small amounts of liquids are added so quickly that only a comparatively small amount of feed is coated.  Those individual coasted particles must then be dispersed uniformly, both horizontally and vertically, to achieve a uniform concentration within the mix.  The more an ingredient is concentrated and deposited in a small area within a mixer, the more mixing time it will take for it to be uniformly disbursed throughout a mix.
And even then, concentrations of medications and premix nutrients (i.e. minerals) are not reliable indicators of mix uniformity of main ingredients such as grains and forages
Forage and concentrate testing:  Table 1 gives the results of a simulation designed to evaluate which testing methods would best detect variation in TMR forage-to-concentrate ratios and premix concentrations.  The study essentially showed that the tests that were most associated with variation in forage and grain concentrations (NDF, Ca and Penn State Particle Separator sieving results) were different than those that best indicated variation in premix content (Na and Zn).
To date, the Penn State Particle Separator (PSPS) has not been used much in feedlots but is a generally accepted tool for testing the physical characteristics and uniformity of dairy TMRs.  A basic PSPS consists of a stack of three trays: a top tray (sieve) with 3/4” holes, a middle tray with 5/16” holes, and a bottom tray without holes.  Generally, the top two sieves will retain forage particles one-half inch and greater in length, while the bottom tray will contain the concentrates and forage fines.  By sieving multiple samples from a given feed batch collected along the length of the feed-bunk(s) into which it was fed-out, one can reliably assess the uniformity of the forage and concentrate concentration and ratio within the mix.
Table 2 shows the result of this type of testing for a lactating dairy ration as well as a finishing feedlot diet where the concentrates were loaded first and the forages last into a vertical mixer, as they were in the example above.  In both cases one can see there was a gradient of higher grain concentration at the start of feed-out than there was towards the end.  This occurs in a vertical mixer because the lower density forage tends to float on top of the denser concentrate ingredients. Longer mixing times can reduce the extent of such a gradient, while reversing the loading order will generally eliminate it.

In finishing feedlots, such a gradient in forage content could leave some pens deficient in fiber and lead to problems with acidosis and bloat, as experienced by the producer in the example above.  Furthermore, such variations in fiber content could conceivably result in even greater losses in animal performance and profitability than comparable variation in medication levels.
Recommended feedlot procedures:  For best results it is recommended that feedlot rations are tested for uniformity by a least two methods, one that evaluates uniformity of forage and concentrate levels (e.g. PSPS or NDF) and one that measures the uniformity of sensitive premix ingredients or nutrients (e.g. medication, Na or marker) within the concentrate fraction.  In most cases, the PSPS or comparable method should be the preferred method to test mixer performance on a main ingredient level; variation in premix concentration(s) may be more related to application method or ingredient interactions than to mixer performance per se.  Finally, it is usually best to follow your equipment manufacturer’s complete recommended operating procedures, and seek their advice when there are problems, to ensure overall mix uniformity and satisfaction …“Because Nutrition Matters™”.
Dr. Alan Vaage is a Ruminant Nutritionist with over 30 years of experience in the beef industry, and currently provides technical support for Jaylor Fabricating Inc., Orton, Ontario.  Dr. Vaage can be contacted by email: nutrition@jaylor.com.