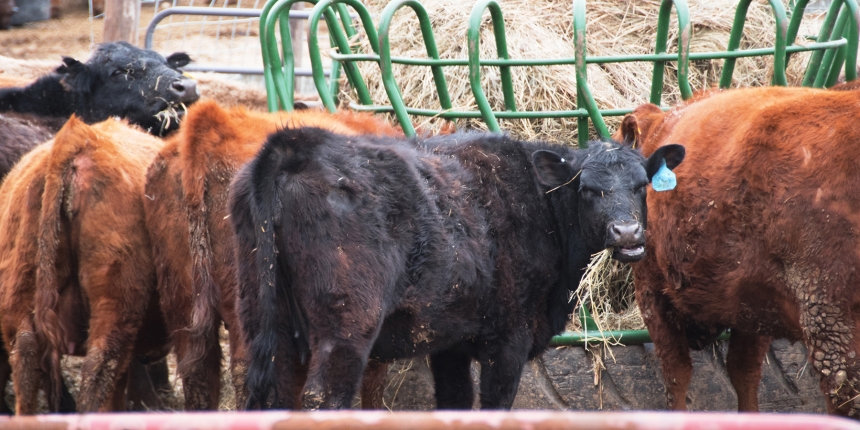 At the moment there is increasing concern about the expanding beef herd, the associated fall in prices, and the effect it will have on cow-calf profitability.  This inevitably results in discussions on how to decrease feeding costs, and especially reduce the waste that is experienced when hay is fed free-choice in hay feeders.  While it is true that investments in more advanced designs of hay feeders or equipment to process hay can reduce wastage, its net effect on animal performance is often disappointing because it simultaneously reduces the nutritional quality of the forage that is consumed.  Efforts to decrease forage waste must be combined with practices that increase the overall quality of the diet, if decreases in performance are to be prevented, for the reasons described below.
Hay sorting and waste increases the quality of the diet that is consumed: Waste associated with feeding long hay as bales or otherwise in hay feeders is due to animals sorting and selecting out the higher quality parts of the forage.  This is a natural behavior of the animals, easily observable during grazing, whereby they seek to maximize the nutritional value of the diet they consume from the forage that is available.
In general, cattle fed hay free-choice seek to eat a higher proportion of leaves versus stems to meet their optimal level of nutrition.  The attached table gives an example of the leaf and stem composition of good quality grass and alfalfa hays.  The leaves of both have higher energy and protein content, with the difference being more pronounced in alfalfa than grass.  With grasses, the protein content of stems alone can be less than that required (7-8%) to ensure optimal digestion.
Research has shown the extent of hay sorting and waste also increases as forage quality declines.  Efforts to maximize the amount of hay harvested by harvesting at more advanced stages of maturity may thus prove counter-productive and less cost-effective than expected due to increased levels of wastage when forages are fed free-choice in hay feeders.
Effects of decreasing waste alone: Over time a cow-calf operation will come into balance between the amount of hay that is needed to be produced to support a herd at a given level of performance with an associated level of waste, i.e. hay production = hay consumed + hay waste.  If one then takes measures to reduce wastage by forcing the animals to eat more of the poorer quality material, either by limiting the amount fed until its eaten, or by chopping the forage to make selection more difficult, the following will occur:
a) The average energy and protein content of the diet consumed will decrease,
b) Dry matter intake will decline due to the higher fiber content of the diet, further decreasing energy and protein intake.
c) Reduction in nutrient intake will put downward pressure on milk production, calf growth and weaning weights, and reproductive efficiency.
d) If sorting is still possible before the animals are forced to “clean-up” the poorer quality forage, such as with better designed hay feeders, variation in body condition and performance among herd mates will increase due to competition.
Decreasing forage waste requires adjustment of the nutritional content of the diet: It is simply not possible to successfully decrease waste from ad libitum feeding of hay without loss of performance unless one simultaneously increases the quality of the forage that is fed, or supplements the forage to compensate for the reduction in quality of the diet that is actually consumed.
Improvement of forage quality: Depending on the level of sorting prior to the implementation of mechanisms to reduce waste, forage quality may have to be increased by as much as 30% or more to maintain animal performance, depending on the type of forage fed and the stage of production involved.  This means that a significant portion of the forage should be harvested at an earlier stage of maturity than done previously.  If this is not practical, supplementation will need to be increased during periods when nutrition requirements are higher, such as during late gestation and calving.
Supplementation: Lower than optimal forage quality is relatively easily compensated for by supplementation.  The challenge is ensuring each animal gets its share when feeding the forage and supplement separately.  In this case, dominant cattle tend to get more than their share of both the higher quality forage components and the supplements, and can become over-conditioned, while young and less dominant cows get less than they require and become thin, have poorer performance and become more prone to health problems.
Advantages of using a Vertical TMR mixer:  It is at time like this, when cattle prices are declining and forage resources are limited and costly, that a vertical TMR mixer can provide a high return on investment.  Rather than increasing costs by making the largest amount of poorer quality forage possible and then letting animals sort and waste a significant portion the results, with a TMR mixer, you can:
a) Produce forage with a target level of maturity and nutrient content to match the requirements of a given animal (e.g. cow vs. replacement heifer) or stage of production (cow post weaning vs late gestation and calving), and
b) Process the forage and incorporate supplements as required such that each animal can be assured of getting level of nutrition they require.
Producers who switch from feeding forages free choice to using a Jaylor mixer often remark that their round bale use is cut in half during the first year of use, mainly due to complete use and more efficient application of their forage resources.
This year, as we enter the 2017 forage season, consider whether it may be an opportune time to add a vertical TMR mixer to your operation to cost-effectively reduce waste and increase the profitability of your operation….  Regardless, now may be an opportune time to fine tune your forage and feeding program to reduce waste …“Because Nutrition Matters™”.

About the author
Dr. Alan Vaage is a Ruminant Nutritionist with over 30 years of experience in the beef industry, and currently provides technical support for Jaylor Fabricating Inc., Orton, Ontario.  Dr. Vaage can be contacted by email: nutrition@jaylor.com.