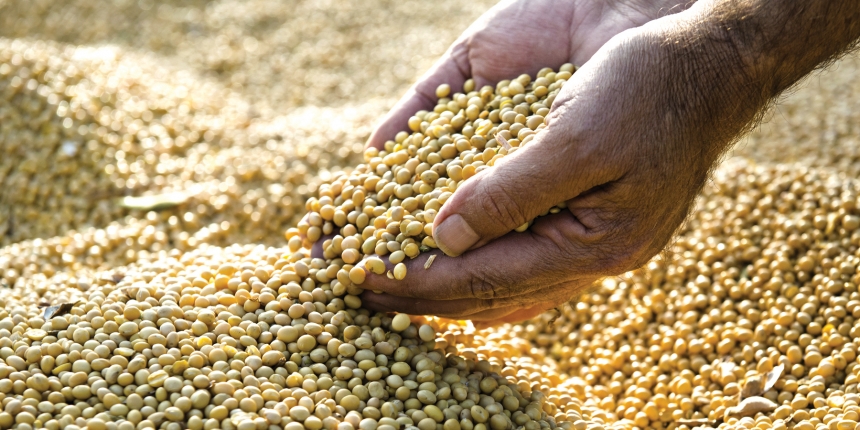 Agricultural marketing. It’s the classic sticky wicket. If you do it right, you will thrive. If not, it can make you fail. You can try to control it or it can control you. And for many North American farmers — both small and large — ag marketing can be one of their biggest headaches. The good news? Thanks to Mark Gold and his team at Top Third Ag Marketing, with the right approach you can expand your ag marketing strategy and improve your bottom line.

As a city kid born and raised in Chicago, Mark Gold, managing partner at Top Third Ag Marketing, began getting involved in the commodities market when he was 18.

“I started out as a runner at the CME in 1973, and back in the early 1970s the only thing we were trading in the pits in Chicago were cattle, hogs, and wheat, corn and soybeans,” Gold says. “I realized that as a city boy, if I wanted to be trading those commodities for the rest of my life, I ought to know a bit about raising corn, beans, cattle and hogs.”

So Gold headed to the University of Illinois and obtained a degree in agricultural economics. He proceeded to buy a seat on the Chicago Board of Trade (CBOT) a mere month after graduation.

Gold spent the next 20 years in the soybean pit at the CBOT. When things would get slow at the Board of Trade, he would lease a seat at the Chicago Mercantile Exchange and trade anything from cattle to Swiss Francs to S&Ps. Gold is also the former vice chairman of the board of directors of the New Orleans Commodity Exchange, which traded rice, cotton and soybeans.

After a series of ups and downs in the market, Gold decided to leave the pits, sold his seat, and eventually started his own firm in 2006.

“We started Top Third with two brokers, and about 150 clients and since then we’ve grown to 12 brokers and 3,000 clients,” Gold says. “Our client base is coast to coast — from Canada down to Texas, located where there is major corn, soybean, wheat, or cattle production,” Gold says.

According to Gold, Top Third works with farmers who have 200 or 300 acres to those with 30,000 acres. But that’s not what sets Gold and his team apart. Rather it is their unique approach to commodity brokering.

After spending more than 40 years of his life as a professional speculator, Gold understands how tough it is to beat today’s markets as an outside speculator.

“Government statistics indicate that the odds show that 93 percent of outside speculators lose money trading,” Gold says. “When one tries to outguess the market, his odds of being right are only 7 percent. We don’t want our clients outguessing the market or speculating, we want them managing risk.”

As Gold explains, historically most farmers have turned to commodity brokers or marketing gurus to get their opinion on where the market is headed.

“But in my opinion, if any of us marketing gurus, including myself, knew where the market was going, we wouldn’t be telling anyone else,” Gold says. “We’d be long retired.”

As a risk manager, Gold is quick to point out that he doesn’t know where the market is headed, but he does know where the risk is. This unique approach allows Gold and his staff to assess risk management for their clients on a large scale, as opposed to trying to outguess the market.

“We can look at 30- or 40-year charts and determine what is the long-term risk, where can the prices go,” Gold says. “But farmers, for the most part, don’t believe they can go to those low prices. However, what has been proven time and again is that the risk is much greater than the average producer would believe it is.”

Gold says that he has seen numerous farmers and ranchers make the mistake of listening to marketing gurus’ opinions of where the market is going to go.

“Most farmers also make the mistake of not marketing grain when they have a prime opportunity to do so,” Gold says. “Farmers historically have sold their crops at the bottom third of prices that are available to them during the year. One of the reasons they do that is that they get emotional about the markets. When it’s low they throw in the towel, and when prices are high and they should be selling, they don’t sell, believing prices can go even higher.”

The team at Top Third believe their time-tested program of cash sales, along with option strategies, can help farmers consistently approach the reasonable goal of marketing their crop and livestock in the top third of prices that are available to farmers in any year.

“When markets are on the highs and the analysts are talking droughts and shortages nobody wants to sell anything because they are caught up in the emotions of higher prices,” Gold says. “And when prices are low they are caught up in the idea of, ‘I missed the opportunity, so I might as well sell while I still have something left.’ They get caught in the emotional ups and downs of these markets.”

In his experience, Gold has seen an enormous amount of change in the industry, including the advent of the commodity options market. Top Third is a very strong proponent of using commodity options for farmers to help manage risk. Options are confusing to many people but Top Third strives to keep it simple in their approach.

“We basically view a put option as an insurance policy. A producer can buy a put option today to protect the price of their crops or livestock in case prices go down,” Gold says. “An example is a rancher producing cattle. We are still at historically high prices with feeder cattle being worth over $200 CWT. We can buy feeder cattle put options, in case feeder cattle move down to $150 CWT. We can pay $4 to $5 CWT to purchase a put option to protect $40 to $50 of that risk.” If the market moves higher, the premium the producer paid for the insurance policy (put option) will be lost, but they may be able to capitalize on selling feeders at higher prices, because they still own the cattle. The put option has just protected against lower prices.

“When we go sell grain oftentimes we look at buying a call option, which is like a lottery ticket,” Gold says. “Go ahead and sell the grain, buy a call option and if there is a jackpot out there, you have your lottery ticket in your hand. Farmers are always reticent to sell grain because they are worried about higher prices. One of the reasons they don’t sell it when prices are high is that they think prices are going to move even higher, and they don’t want to miss it. You have to keep in mind that, like a lottery ticket, the odds of a call option paying off, particularly at higher prices, is fairly small, but if it gives you the confidence to pull the trigger at great prices, it may be worth every penny.”

These strategies and more have enabled Gold to help farmers across the nation manage risk for the past 20 years. That’s important because Top Third believes that marketing is about a 10-year time frame. As Gold explains, most producers want to know from a broker where the prices are going to be tomorrow. But if no one knows where the prices are going, how can you manage risk?

“Our approach is that the success of marketing should be looked at over a 10-year period and not what anyone does in one year,” Gold says. “Any marketing guru can have a good year, but if you can consistently put your clients in a position year after year to get to the position in the top third instead of the bottom third — that is the mark of a good marketing program.”

Gold stresses that it doesn’t do the American farmer any good if they are with a broker who has a “hot” year or two, and then, over the next three or four years, gives it all back plus some. Top Third takes a much longer view in terms of marketing.

Helping protect the American farmer has been Gold’s vision in the commodities market for his entire career. “Since 1995, when I began working with today’s farmer, I have been trying to educate them about the tools and strategies that are available to use in marketing — tools that I believe can turn the odds in their favor — instead of continually fighting the odds of 93 percent of people losing money when trading,” Gold says. “For a city kid, I’ve gotten to see parts of this country that few people get to see. I have the utmost respect for the American farmer and how he does what he does — doing it better than any other farmers in the world. And I enjoy being a part of this experience.”

By Maura KellerWalk through any cattle feedlot...

The Family Business  For many second- or...

By Maura KellerRio Nutrition is a product of very...