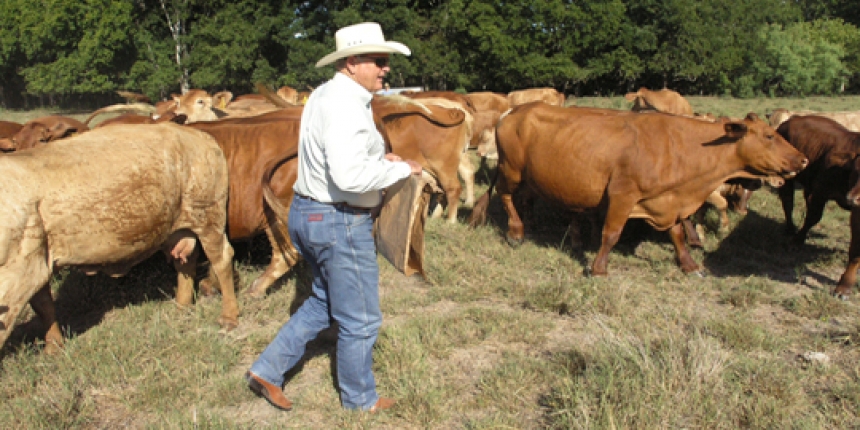 Baseball fans see Nolan Ryan in the owner’s box at Rangers Ballpark in Arlington. They know him as part owner, president and chief executive officer of the Texas Rangers. Or perhaps the legions of fans see Ryan in their cherished memories - the seven no-hitters, the 27 major league seasons, the all-time strikeout record, or the 324 wins. Ryan understands that people excel in those things for which they have great passion. When he explains his success in baseball or ranching, he uses that one word more than any other.

That passion for the cattle business, and the willingness to use his influence to benefit the industry, has earned Ryan the 2011 Golden Spur Award, which recognizes leadership and exceptional service to the ranching industry.

“Being able to spend time with the cattle and seeing what we’re producing—that’s something I find relaxing and enjoying.” Ryan says. “It’s just something I always gravitated to and get a lot of satisfaction, being out on the ranch, probably more so than almost anything else I do.”

Ryan is often asked to speak out for the industry. He has always responded eagerly. There was a term on the Texas Parks and Wildlife Commission and a board seat on the Texas Beef Council. He made time to support the Go Texan program and for a trip to Japan to convince that beef and baseball loving nation to buy more U.S. beef. In 1990, he was asked to run for Texas Commissioner of Agriculture.

He was interested and considered it. But at the time, there were more than 900 strikeouts and two more no-hitters left in that amazing right arm. Baseball is still very much a part of Ryan’s life, but the pull of the ranch and standing up for agriculture remains strong.

“Ever since I’ve known him, he has had a passion for that. Sports has enabled him to buy a ranch or own cattle or be a rancher,” Ryan’s wife, Ruth says. “He always studied books about cattle and ranching. I knew he would stay in the business in some way, probably most of his life, and he has.”

Charlie Bradbury, chief executive officer of Nolan Ryan’s All Natural Beef, says Ryan is “pretty much what he appears to be.”

“He’s just a real, down-to-earth guy who can visit with anybody. He’d just as soon talk to the guy holding the door open for him at the hotel as he would some CEO with some large corporation. He really has a unique ability to visit with somebody on their level. He really can communicate with people,” Bradbury says.

Adds Texas Agriculture Commissioner Todd Staples: “The thing that Nolan brings to the table is an undying work ethic that I think separates him, and a willingness to give back. Nolan has been recognized around the world for promoting Texas beef.”

Legend has it that as a young boy, he enjoyed throwing random objects at any target. His father felt baseball might be a more productive outlet and encouraged his son to play the game.

Baseball afforded Ryan the opportunity to become a rancher, but he had the cattle bug long before major league success.

“Well, I tell people the story that I really got into the cattle business when I was about 10 years old. I talked my parents into taking me out to a dairy farmer who was a member of our church and bought a day-old calf from him and I started bottle feeding it. Once I got it up and going after about 10 days, I convinced them to go back out there,” Ryan says.

“That was the first time I ever found out about price increases because the first calf cost me $1.50 and the second was almost $2. And I couldn’t quite understand why it had gone up 50 cents in about a 10-day period. So anyway, then I’d start another one and once I got them up to about 400, 450 pounds, I’d take them to the auction barn and sell them.

“Then I’d buy a replacement heifer. I built up to about seven heifers doing that. And once I got to that point, I got into junior high and started playing football and basketball and baseball. So, I had to make a decision at that point in time so I had a dispersal. I sold my seven heifers because of

sports. And it was probably the right thing to do,” Ryan says.

And clearly, it was the right thing to do. But the desire to be in the cattle business never went away.

After high school, Ryan wanted to play baseball at Texas A&M University, but the head coach at the time—in one of baseball’s all-time worst misjudgments—told him that his future might not be in baseball.  Ryan and the New York Mets had other ideas. In 1966, he began the first of 27 major league seasons. Ryan learned more from baseball than how to pitch. There were lessons, in fact, that fit in very well with his dreams of the cattle business.

“To play as long as I did, you really had to have the work ethic; the desire to play and participate and perform on that level into my 40s,” Ryan says. “So I took that same approach to my cattle operation. And I can honestly say, with all the things that are out of your control in agriculture, if you don’t have that passion and dedication, I don’t see people staying with it. We’re going through right now one of the worst droughts that we’ve seen, certainly since I’ve been a producer. I think I used a lot of the same principles I used in baseball in my cattle operations.”

During his time on the board of directors, the Beefmaster association became involved in a branded beef program—one of the first of its kind. The success of the Certified Angus program had somewhat diminished the market for Beefmaster bulls. Leaders of that organization began looking into a brand of its own. They found the answer sitting on the board of Beefmaster Breeders Universal—Nolan Ryan.

“Nolan was still in Alvin at the time,” says Bradbury. “I remember, we went to a grocery store and we bought some Earl Campbell sausage, and some Phyllis George chicken and Jimmy Dean Pork Sausage and some things like that. We put them in a cooler and drove to his office. He was sitting at his desk and we said we need to talk to you about something. We pulled those out, put them on the table. He started rolling his eyes. We told him what we wanted to do and obviously, he had to think about it.”

“As they did more research, they felt like they needed something to distinguish them from other branded programs, so they came to me and asked me if I would have an interest in being involved in it and them using my name,” Ryan recalls. “And at the same time, we were going to be the first certified tender program.”

Ryan says the cattle business is the most challenging business he’s ever been involved in.

“There are so many components that are out of your control. You do what you think is best and you take all the information that you can accumulate and prepare for what you think might be the worst case scenario, but you don’t really know if that’s the case or not, because you don’t know what the market is going to be, and you don’t know what the weather patterns are going to be,” he says. “So you have all of these challenges that are out of your control. You end up being in a reactionary mode. I find that probably as frustrating and agonizing as anything I’ve ever done.”

The cattle industry that Ryan embraced was eager to claim him as one of their own, and he gave back. What does that mean for the industry?  Before Nolan Ryan Tender Aged Beef was launched, Ryan’s standing as the face and voice of the brand was put to the research test.

“There were 73 percent of American households who know who Nolan Ryan is. But unlike some of the other people who are around him on the list, he has a very high, positive score. In other words, there are some other personalities that are almost as high in number, but when you ask them, what do you think about this person, they don’t want anything to do with them,” Bradbury explains. “That’s not the case with Nolan. He actually has the highest positive ratings of any sports personality on that research. So he’s a person who is very credible, he is very well known, and, he very much believes in what we are doing in the beef industry.”

Commissioner Staples says Ryan focuses on what is right “and then works to make it better. That’s one of the things that I think has benefited agriculture so tremendously is because Nolan has been a steady constant. He understands market principles; he understands good genetics. He understands building partnerships with industry members. And that is one of the things that I think has established his credibility in agriculture, because he’s delivered. And he’s done it in a sound way that gives others confidence. And it certainly has benefited Texas beef producers.”

This year’s winner of the Golden Spur works to promote agriculture while building one of the state’s most impressive cattle operations.   Baseball brought fame to Nolan Ryan, and he’s steered the Texas Rangers to a level of success the organization has never known. The baseball career may end by his own choice someday - but he will always be a rancher.

“The ranching and cattle business is a passion of mine. It’s been that way ever since I was a little bitty boy,” Ryan says. “Why it is, I don’t know. I think I was meant to be in this business and I truly enjoy it. People ask me, what do I really enjoy doing, and I tell them I enjoy being in the working pens working cattle. That’s something I get a lot of enjoyment and satisfaction out of....”