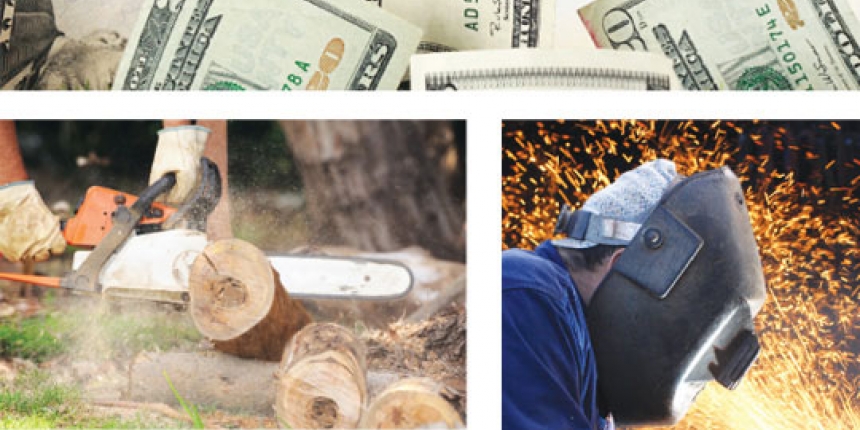 There are still nearly a million cattle farms in the United States, according to the 2007 Census of Agriculture—but more than three-quarters of those farms have fewer than 100 head, and they average only about $16,000 a year in annual receipts.  Many cattle ranchers have full- or part-time jobs in town…but others have found they can generate added income right on the farm.

Dan Loy, Iowa State Extension beef specialist and director of the Iowa Beef Center, points out “The average cow herd size in Iowa is about 50, and for a cow herd to be a full-time enterprise requires several times that.  So most cow/calf enterprises are either part-time operations, or secondary operations to a farming enterprise.  There has to be a source of income somewhere, whether it’s off the farm, crop production, a feedlot, swine production.”

Cattle farmers may be able to market the skills that they employ on their own operations to surrounding farmers and ranchers.  Loy says a good example of that would be welding: “There’s a lot of machinery involved in agriculture,” he says, “and construction, and that machinery breaks down.”  Many ranchers are also very good mechanics, and may be able to offer a repair service.

They can also offer use of their equipment as a sideline.  Whereas some ranchers aren’t big enough to justify buying a baler or other on-farm implement unless they go in with other producers cooperatively, if you own such an implement and your neighbors don’t, you can offer to do custom work.

Ranchers can also market the additional resources contained within their operations.  Those with timber stands can sell firewood, or otherwise market the wood from their trees.  In parts of the country where there’s a nutrient deficit, feedlot operators can market the manure from their herds.  Says Loy, “The value of  manure from a feedlot steer, depending on the value of the fertilizer when you do the calculation, is somewhere around $20/head.  The average return to cattle feeding over the past 15-20 years is probably somewhere in that neighborhood.  “So if you’re able to capture the nutrients, that value is there.”

Another option, especially in wooded areas, is to offer hunting leases.  Loy says, “From the producers I’ve talked to that are doing it, it requires management just like the cattle operation does to be successful at it.  Depending on the extent of the operation, it can be a significant time consumer.   But the feeling I get, at least for those leases that are in the ‘trophy hunting’ areas—it can be a significant percentage of a what a rental rate might be for cattle, for example.”

Byron Leu, Iowa State area Extension cattle specialist for 18 counties in the southeast part of the state, says the “Albia buck” really launched interest among area landowners in marketing hunting rights.  The enormous white-tailed deer was bagged seven years ago by a young hunter, but had been rumored for several years before that and even dismissed as a hoax.  With a rack of over 300” and now preserved in a museum, the Albia buck remains one of the largest trophy deer ever taken by a hunter.

As a result of that buck and other outstanding deer that have been harvested over the last decade, Leu says the area has been subject to something of a media blitz.  “That starts drawing in not only some video folks, but also some of the other things that go with it,” he says; that includes increased demand for hunting leases, and guides to lead hunting groups.  Before deer and turkey hunting became more popular, there were people coming in from out of state to hunt pheasant and rabbits; Leu says that trend has subsided because “resources have decreased—we don’t have as many rabbits and pheasants as we used to have.”

As Loy noted, not everybody has the time and management skills to run a hunting operation on their cattle farm.  Leu says when producers approach him for advice, he tries to gauge their interest as well as their expertise, vision and availability of resources.  In some cases, the producer can enhance the experience for guests; some have enlisted local 4-H chapters to establish programs specific to encouraging the presence of the deer population.  Landowners can also offer hunters housing and a meal.  He says, “We’ve had some people that have actually bought acreages or farmsteads and converted them over to wildlife farms, and then work with the neighboring producers to actually put in crops or do seeding, or any of the types of things that help to enhance the development of that operation.”

Despite the rising popularity of hunting programs, Leu says there’s no fear the market will be saturated.  In fact, quite the opposite—acreages that used to be open to hunters, provided they asked the owner and were good stewards, are now closed.  “I definitely hear that they don’t have a place to go like they used to,” he says.  “But I’m sure down the road if the economy can improve, this is going to continue to be of interest to a lot of folks.”

There are also ways producers can use their cattle raising skills and available resources to develop sidelines.  Leu says some ranchers will develop first-calf heifers; “Those kinds of things still offer some options,” he says, “and on a forage-based enterprise, that can provide a means to market some of the products and sell your expertise and labor.”  And value added cattle production is rising in popularity, says Dan Loy, particularly nearer to urban areas.   “Producing freezer beef,” he says as an example, “and then you get into the natural and organic, very-highly-valued type of programs. There’s more interest in that; it’s not a large volume, but it’s a high-value system that a few producers are taking a very serious look at.”

Another regional Iowa State Extension beef cattle specialist, Joe Sellers, is involved with a new project through a local economic development group; they’re “trying to help stimulate more local foods usage and also help network together producers to do local food,” he says.  He had previously worked with a group of growers who called the project Chariton Valley Beef, and since then has seen several producers spin off to form an LLC that has a few producers together that markets beef locally.

The key to such a project is to get several producers with different projects working together, so the group can offer consumers a mix of products.  One may raise organic beef; another grass-fed; a third, beef that’s been aged a certain length of time, or fed to a certain level of marbling.  Sellers says most of the ranchers who enter into these ventures do so as a sideline.  “For example,” he says, “we’ve got one producer who’s got a traditional feeder calf production system; he sells feeder calves, and he’s also got some cattle he sorts off that go to a natural program that he sells to Tyson.  And then he’s got this other group that he’s actually feeding a specific diet to fit his local food system group…These are people who are looking at a two or three tiered marketing plan.”

There are several obstacles that can, at least at first, keep such a venture from achieving profitability.  One problem, says Sellers, is it can be difficult to sell the entire carcass; custom slaughter is often done by a smaller, state-inspected plant that can’t sell its product across state lines.  “Those smaller plants don’t have the same financial advantages; more money creates the drop credit,” he says.  Ironically, the tougher economy has eased the problem; whereas the project was only able to move steaks and other middle meats at the outset, they now find more demand for hamburger and end cuts.

With each producer doing something different, too, a new venture has to overcome the lack of coordination; says Sellers, “We have to differentiate their products in a logical way and let them sell them individually,” and price the products in a way that demonstrates to consumers each is worth the premium being charged for it.

But it’s just one of many ways ranchers can generate more income from the farm, and as Dan Loy says, “Farmers, producers—they have an entrepreneurial spirit, and they’ll find ways to supplement their income.”