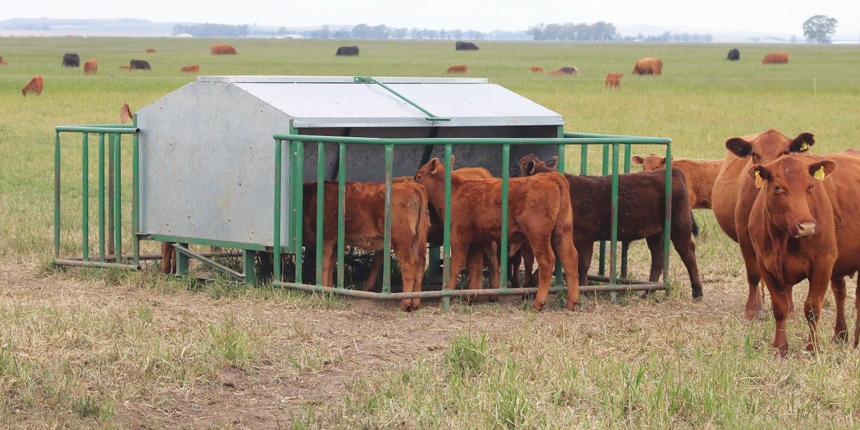 Feed, a primary expense in the livestock business, brings plenty of difficult decisions. Producers want to maintain maximal efficiency on this limited and costly resource. A primal area where you can make or break these goals is in youngstock, namely weaning calves. The idea of offering creep feed can be both tempting and repulsive at the same time. More calf by weaning means more calf to sell, right? But more calf to feed also means more economic input. The decision to creep feed or not is a case by case basis. And even then, it is multifactorial with all the various points to consider beforehand.

According to situation
When done properly, a good creep feeding program is a surefire way to increase your weaning weights. It is tempting to erroneously assume that when feeder prices are high and feed costs are low, creep feeding should be utilized by default. A well-informed decision needs to take the economic and productivity breakdowns into consideration. However, neither one of these are entirely simple to deduce.
For example, feed conversions for animals on creep feed tend to be rather variable. It is said the ratios of pounds of feed consumed: pound of calf weight can be anywhere from 5:1, the most optimal, all the way through an extremely poor 15:1. What contributes to feed conversions can be hard to pinpoint without lots of data and background information. Some cows with a heavy, nutrient-dense milk flow may have calves with very poor feed conversion because they are getting so much of their nutrition from excessive nursing. Genetics, feedstuffs used and forage quality also all need to be taken into consideration. However certain conditions, such as drought, creep feeding may almost always be the superior feed conversion to just forage.
Even if you have a pretty good pulse on feed conversions and the value of each additional pound of gain, there are other external factors that need to be considered as well. If you are grazing on endophyte-infected fescue, creep feeding is almost always beneficial. However, some research from Illinois has suggested offering feed that is more of an energy supplementation instead of protein has a greater impact in this instance. This research also found that creep feeding for about two months (56 days) prior to weaning had a better conversion than animals started at 28 or 84 days. These animals creep feeding for 56 days gained 0.75 pounds more per day than calves not being creep fed.
Operations who are planning to retain replacement heifers should not creep feed at all, in fact it can ruin their future careers as successful dams. High nutrient intake at such a developmental age has shown to have negative impacts on mammary system development, along with other issues that will come to light later in life.

According to the economics
Economics are an everchanging thing, differing annually, quarterly, seasonally and even more frequently. Which is why it’s an aspect that must be scrutinized each year when considering the calf program. Because it is such an open-ended topic, equations are useful in the decision-making process. The University of Nebraska Lincoln has developed an online resource called the “Creep Feeding Cow-Q-Lator” on their website, this takes into account your own numbers on the books, projected prices and other financial factors as well.
Similar to feed conversion, cost of gain is another equation that matters for a successful or unsuccessful creep feeding regimen. It should include not only the actual cost of feed, but any delivery and depreciation costs as well, if they exist.
Assuming the live market value, you can figure the breakeven cost of added gain. For example, if an animal weighing X pounds at market brings $1.50 per pound comparted to another weighing X pounds at $1.00 per pound, cost of added gain would need to be less than $0.50 for it to be profitable. That’s an oversimplification, but you get the idea. If your rations cannot be adjusted to make sense for this, creep feeding probably won’t be worth it for you. However, there may be some specific groups within your herd that would benefit from creep feeding even if it doesn’t exactly pencil out to this. Limit-feeding, usually accomplished by adding five to ten percent salt to the ration, can also be an economic way to still provide grain and put on some additional weight without wholly committing to the expenses of a free choice offering.
If you do a retained ownership or finish your animals yourself, it should be noted creep feeding has not consistently shown to improve carcass quality in the long term. The extra weight may very well continue to be measurable at later points in an animal’s life, to the feedlot and even on the rail, but it doesn’t automatically correlate with superior marbling.

Creep according to need
One of the best ways to utilize creep feeding is to do it according to animals who could benefit from it most, and that may not be all your animals every year. In this case, separating groups for creep feeding and not into different pastures is an excellent option if possible.
Some ways you could do this would be to creep feed animals who are on endophyte-infected fescue or have unthrifty dams with poor milk production. Or, if you have some groups who you want to get an edge on without offering full free choice, you can set aside some groups for limit-feeding. Forages can also be used as a form of creep feeding, if you have some pastures with higher quality forages that you want to keep cows out of, you may consider adding creep gates to these areas.
Remember, creep fed calves will need time to adapt to a high grain diet, if not they will be slower to grain weight than their non-creep feed counterparts and lose the whole point of the advantage in the first place. Moving them directly into a feedlot situation may avoid this entirely.
Like anything else in the cattle business, the success or failure of creep feeding is dependent on wise decision making and management, and it changes with each calf crop. Find the right balance of healthy optimism and realism about what inputs you are able to contribute and with the potential returns.