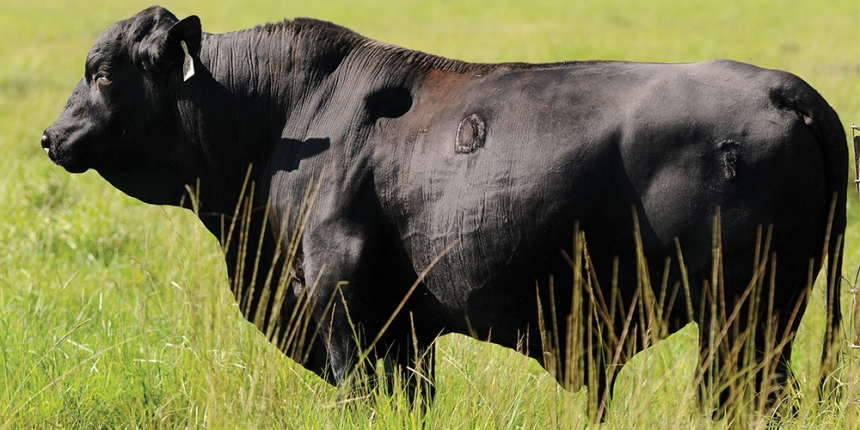 Sire selection, live or in a frozen straw, is one of the most important reproductive decisions you will make regarding your herd. Depending on what sector of the industry you represent, this decision can directly economically impact not only your cow herd, but your replacement heifers, animals on a retained ownership, and even feedlot or rail performance if you feed out yourself.

Knowing your herd and market are certainly cornerstones in making this decisions, but there are also other outside scientific figures that may be of equal importance. Research, data and statistics can bring some new perspectives to your breeding program you may not have otherwise obtained just looking at your own population.

Significance of Genetic Change
Every new sire you bring into your herd, on the hoof or in a tank, brings in some permanent genetic change. Operations who retain their own heifers in closed herds are already somewhat limited in their genetic change, relying heavily on new sires to bring in any new traits you desire. Even if you are practicing culling and retain only half your heifers, there will still be some “average” quality animals in the population. To bring those up and increase the population average, you need a significantly higher quality sire. Heterosis is one way to accomplish this in the commercial herd.

Genetic change is accelerated in crossbreeding programs with heterosis. These are due to additive and non-additive genetic effects. Additive effects are the portion of total genetic value that can be transmitted from parents to offspring; they are heritable. Non-additive effects are the dominance and epistatic effects, which have to do with the interaction of genes on the loci, or points on a gene.

Each parent animal only contributes one gene, so a single parent is unable to transmit dominance effects (or heterosis) to its offspring within the breed. But multiple breeds are able to have a significant effect, one that is visible in the resulting phenotype of the progeny. This is why heterosis is the superiority of a crossbred progeny compared to straightbred parentage.
Regardless of straight or crossbreeding, the bloodline of the sire in question will be around for awhile. Sires used in the last three generations in a cow herd keeping replacement animals will contribute 87.5% of the genes in a calf crop, so it pays to be picky.

A Look at the Numbers
EPDs do some of the work for you in giving the heritability of specific traits and what changes you can expect to see, while of course accounting for genetic variation. The more progeny a sire has, the more data going into his EPDs for enhanced accuracy. As genomics gains more traction in the beef industry, genomically enhanced EPDs (GE-EPDs) are even more accurate.
Dollar indexes are a way of condensing multiple EPDs and their meanings into an equation and giving an estimate of how much more economically an animal is worth in specific areas. It allows producers to consider offspring in terms of net profit.

Right now, there are several indexes to choose from that are pre-ordained. However, word has it there is a research project in the works at the University of Nebraska-Lincoln in Collaboration with Kansas State University, the U.S. Meat Animal Research Center and Thera Solutions, LLC to create a tool that would allow producers to develop their own index based on their herds specific needs.

Don’t forget to look at the EPD percentile rank, which is an easy way to see where a particular sire rank s in relation to the rest of his breed for specific traits. The closer to 1% the more positive for said trait. Be familiar with the breed associations you work with and what the benchmarks are.

Breed According to Need
Once you know what you’re looking for in terms of a sire, the next step is getting him the right cows to service. Remember, your dream bull may simply not work for all your animals. Breeding by group, or in some cases by the individual, is ideal.

These include “heifer acceptable” bulls with high calving ease. Of course they will not be exceptional for weaning weight, but they will increase the likelihood of young and at-risk dams having a safe calving.

The “terminal” sires refer to groups where the focus is on offspring created as strictly feeders and without retaining heifers. These have an emphasis on birth and weaning weights along with dollar indexes.

The “balanced trait” bulls are those who produce well-rounded calves with both growth and maternal characteristics.

For operations with a focus on reliable cows with strong maternal instincts, they may want to look at “low maintenance” sires who produce smaller daughters that are capable of growth and milk. These animals are usually smaller framed and may have to live in environments with limited labor and resources.

Thes “high productivity” sires are those designed to increase calf productivity, typically in the top third of the breed for traits including growth and maternal characteristics. Feeder calves born from these sires and grow and maintain well and daughters have enough maternal strengthen to join the herd.

Finally, there are bulls who fit into the “carcass merit” category and are ideal for producers planning on trained ownership. These are the power bulls for all traits of economic and grading performance. This is similar to the terminal sire, but instead puts more focus on the traits at the packing house as opposed to ones tied to feeding and or average daily gain.

Small scale producers who fill their own niches can find themselves in especially challenging positions. Selecting for a well-balanced herd sire is perhaps among the most challenging, because statistically and factually there are negative correlations and trade-offs between things like carcass quality and performance traits or calving ease and weaning weight.
Artificial insemination is a powerful tool in this area and can allow you to use multiple sires for many groups. Likewise, separating your herd according to different bulls for live cover is also an option as well.