Starting from scratch… to Southeast Sun Belt Farmer of the Year: The Robert Mills Story 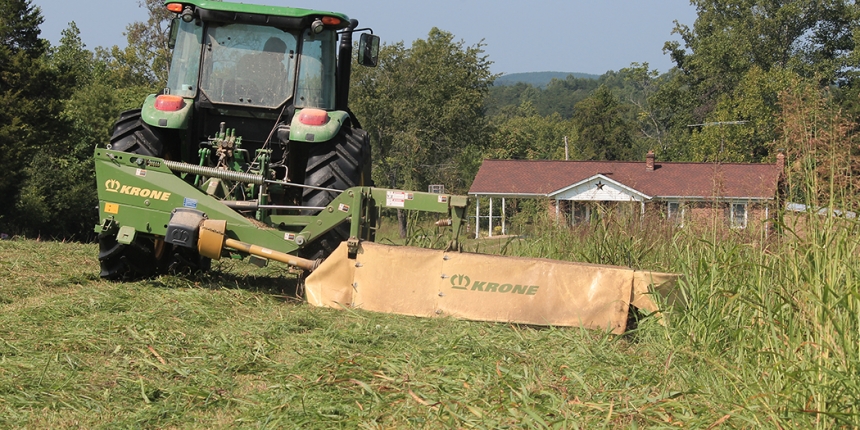 Starting from scratch… to Southeast Sun Belt Farmer of the Year: The Robert Mills Story

Robert Mills owns and operates Briar View Farms, a diversified 2,200-acre farm in Southside Virginia.   The operation includes 300 mama cows, supported by 1,500 acres of grass, baling hay from half those acres while grazing the rest.  Mills grows 150 acres of wheat, and fire-cured and flue-cured tobacco.  And, he manages a poultry operation raising 34,000 pullets annually.

What makes this story so unique is that Robert is a first-generation farmer who started this operation from scratch when he was 13-years-old.  Thirty-two years later, Robert was named Sun Belt Southeast Farmer of the Year in 2017.

How it all began
So how did Robert Mills grow such a successful, diversified farming operation from scratch?
“I didn’t have any family that farmed,” says Robert.  “But I got involved in FFA in eighth grade and that’s when I fell in love with agriculture.”
Robert structured his FFA project to grow vegetables on a little garden plot.  He noticed that there were many smaller land plots sprinkled throughout the area that were not being tended.
“Nobody wanted to farm those little plots with their big equipment, so I did,” says Robert. “After four years we were up to 50 acres, raising field corn, white potatoes, sweet potatoes and string beans.” 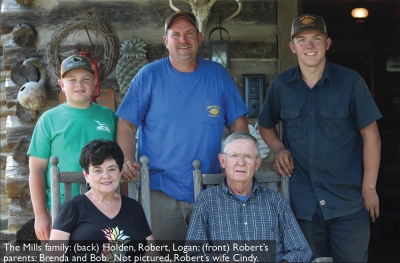 Growing the business
Eventually Robert was renting over 80 acres.  He had a keen sense for identifying customer’s needs in the area. “I created a neat deal with my field corn.  I’d harvest it, haul it to the mill, have it ground and bagged, then deliver it to my customers as bagged feed.”
Robert remained very active in FFA, serving as Chapter President and Star Chapter Farmer.  In 1991 he was elected Virginia State FFA President.  Says Robert, “It was through those experiences that I was able to build up my leadership skills.”  He then pursued a degree in Agricultural Technology from Virginia Tech.  “After graduation I worked for Royster-Clark (now CPS).   I continued to farm, and the operation was still growing, but we were running out of land to rent.”
That’s when Mills started growing tobacco.  “One of the farms I was renting had a tobacco quota, so I started growing Virginia dark-fire tobacco.  That increased our income so we could buy newer, more productive equipment.”
At the age of 25, Robert bought his first farm, 80 acres near Callands, Virginia, where he and his family still live today. The next year he started his cattle operation, buying eight open heifers and renting a bull.
All along the way Robert built good relationships with many area landowners, which helped him acquire one farm after another in the area.  In just a few short years Mills was running over 1,500 acres of land, and expanding the tobacco, small grain and cattle operations.

The Dream comes true
Robert continued to work off the farm as a conservation specialist. Then one day a representative from Purdue Poultry came to talk to Robert.  Together they reviewed a balance sheet and cash flow statement.  It became clear that Robert could trade his off-farm job for the same income he could get by managing a poultry house for Purdue.
Says Robert, “It was October 13, 2001 when the dream of a 13-year-old kid who wanted to farm full time became real.”

Growing the family
Robert and his wife Cindy are raising two sons, Logan, age 18, and Holden, age 12.   Says Robert, “My eldest son is adamant that he wants to be part of this operation.  My 12-year-old also loves the farm and working on equipment.   I’m excited that both of my boys want to be in the agricultural industry because the industry’s been really good to our family.”

Farm equipment plays a key role
Farm equipment plays a key role in the success of Robert’s operation, and he says the support he gets from James River Equipment in Danville Virginia is very important.
For his hay equipment—the disc mowers and tedders—Robert runs all Krone.   “We have a small window of days to capture as much good-quality hay as we can,” says Robert.  “That’s why we run two Krone cutters. When we are in that window, those cutters run every day…those Krone mowers are the heaviest- duty cutter that I’ve seen.  They are easy to hook up…and Krone really hit a home run with the Quick-Change blades.”
About the Krone tedders, Robert says, “We’ve run a lot of tedders, and the Krone tedder is the heaviest- duty tedder that I have ever hooked up to.  We don’t have any tines breaking or coming off.   I never have to get off the tractor, you hit the hydraulics, it folds up and tilts back, and down the road I go.” 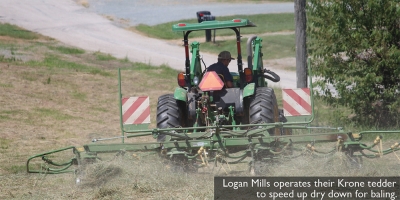 Southeast Sun Belt Farmer of the Year
Robert Mills was named Southeast Sun Belt Farmer of the Year for 2017.   This award honors farmers in the Southeastern U.S.  for excellence in all aspects of their farming operation.
Says Robert, “I can’t tell you what an honor it is.  To be from a small family farm in Southside Virginia, and being a first-generation farm, to me the award was a testimony to the support that me and my family have had over the years as we have struggled and tried to build an operation from scratch.  I’ve said all along that this award isn’t about me.  It’s about everybody that supported us.”

Paying it forward
As Robert thinks about the future, his focus is on making agriculture a viable industry that “can support the next generations coming on.”  To do his part, Robert regularly travels to events and serves on boards promoting agriculture, as well as representing the interests of agriculture in both Richmond and Washington, D.C.
Robert shares what he sees as one of the greatest challenges to agriculture long term.  “The people in rural areas understand what’s going on.  It’s the people in the cities that we need to focus on.”

Krone, the makers of Cutting Edge™ hay and forage equipment, want to thank Robert Mills for what you do, every day, to support agriculture. View the Robert Mills video at the Krone North America Official YouTube page.