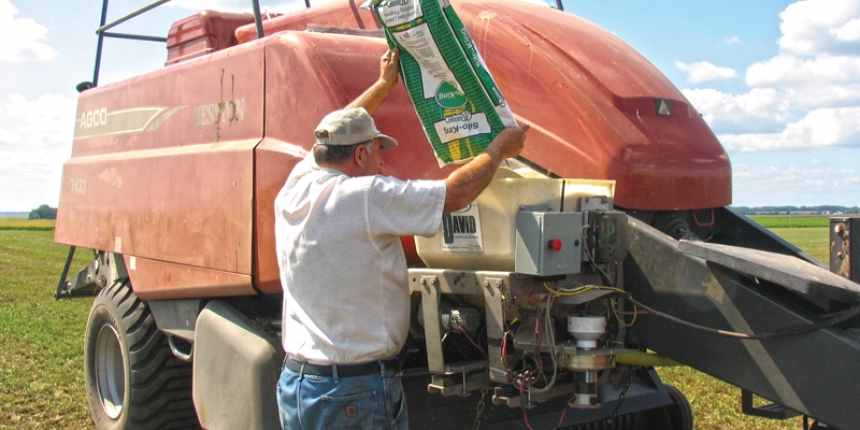 There are many obstacles to overcome when putting up quality hay, silage or fermented grains. These include: crop maturity, packing density, humidity, oxygen and plant moisture content. Silo-King®, a forage and grain treatment additive helps protect feedstuffs from these obstacles, while enhancing digestibility and feed efficiency.
There are two main goals when making fermented feeds: 1) rapid fermentation for maximum preservation of nutrients which happens at the beginning of fermentation; 2) providing a stable product during storage and feed out occurring at the back end of fermentation. Several different technologies are required to accomplish these goals from start to finish.
Silo-King consists of two major ingredient types: stimulants and inhibitors. Stimulants are those ingredients that support and enhance fermentation and digestion of the treated forage or grain. Inhibitors help to prevent heat and microbial (mold, yeast, clostridia) damage. When formulated correctly stimulants and inhibitors support each other to optimize the quality of the finished product.
Depending on the Silo-King product, glucose or molasses is added as a source of sugar to stimulate bacterial action. Providing this food source is important to get the bacteria to start fermentation immediately (Figure 1). There is a 1 to 3 day window to slow the growth of spoilage organisms that want to compete for space in forage and grain.

Dave Spangler, Agri-King microbiologist, indicates that Silo-King is formulated with 3 unique lactic acid bacteria. “These bacteria have been chosen because they control and direct an efficient ensiling process (reduced pH; Figure 2); retaining more dry matter, protein and energy of the fermented feed.” Spangler says the lactic acid (Figure 3) produced by Silo-King’s bacteria help to breakdown prolamin proteins which encapsulate starch of corn silage and high moisture grains. “Once the prolamin is broken down the starch is more completely utilized by the animal. This, in turn, can help soften ration costs since more of the diet’s starch is available. We have many clients who are able to reduce the grain content of their rations when they treat their corn silage and or high moisture grains with Silo-King.”

Enzymes are added to Silo-King to improve the digestibility of various nutrient fractions in forages and grains. Enzymes result in the breakdown of organic compounds into substances that animals and microbes can use as a source of nutrients. Silo-King contains cellulases, amylases, hemi-cellulases, pectinases and xylanases. A detailed description of enzyme types used by Agri-King can be found in the July 2014 edition of American Cattlemen, page 32. Spangler says “Silo-King’s proprietary blend of enzymes is strictly controlled. Since universally accepted enzyme assay methods do not exist, we found that many products’ enzyme claims do nothing to make the animal’s feed more available in its digestive tract. This is why we only formulate Silo-King with enzymes which have been shown to be effective in research studies using rumen fluid and live animals.”
By initiating the break down (digestion) of the various fractions of forages and grains the nutrients contained in the plant fractions become more available to the animal once consumed. This spares energy to the animal as less work is needed for digestion. The energy not spent on the digestive process can go back to the animal for work (gain, breeding, etc.).
Proper fermentation proceeds in the absence of oxygen (anaerobic). According to Spangler, “Not until the oxygen is eliminated in the silo does an efficient, nutrient conserving, ensiling process begin.” If oxygen is left unattended it can be used by spoilage organisms for growth. Spangler indicates: “Silo-King is formulated with ingredients to speed up oxygen removal and stop plant respirations, a process that produces heat, causing heat damaged feed and a reduction in fermentation organisms (Figure 4).” Heat damage will reduce the available nutrient content of forages and grains being fed. In addition, energy is lost as heat in the amount of 3 calories for every 1° F increase in temperature above ambient temperature (McDonald et al., The Biochemistry of Silage, 2nd ed., 1991). To help achieve aerobic stability antioxidants are added to dry and water soluble Silo-King. Food grade antioxidants are used in Silo-King, like you will find added to items such as breakfast cereal to prevent the cereal from going stale before it is consumed. Antioxidants scavenge oxygen in the silage preventing it from being used for growth by spoilage organisms or heat production. Antioxidants help to create the anaerobic environment required for silage fermentation organisms, such as those bacteria in Silo-King, to grow and ferment the feed for preservation.

Eliminating oxygen from a silo helps control spoilage organisms, but it is wise to include an antimicrobial agent to complete the job. Silo-King contains potassium sorbate, a common human food grade preservative. Lactobacillus buchneri is an organism used in some silage inoculants to control spoilage organisms through the production of acetic acid. Agri-King uses potassium sorbate for several reasons:
• Potassium sorbate is as effective as L. buchneri (Kleinschmit et. al., 2005, J. Dairy Sci., 2130 – 2139) (Da Silva et. al, 2014, ADSA/ASAS/CSAS abstracts, abstract 1078).
• Potassium sorbate starts to work immediately whereas, L. buchneri can take 60 days or more to produce acetic acid (Da Silva et. al, 2014, ADSA/ASAS/CSAS abstracts, abstract 1078) (Kleinschmit and Kung, 2006, J. Dairy Sci., 3999 – 4004).
• Potassium sorbate does not have to compete with epiphytic microbes like L. buchneri must (Da Silva et. al., 2014, ADSA/ASAS/CSAS abstracts, abstract 1078).
• Potassium sorbate does not depend on the production of acetic acid like L. buchneri. Carbon dioxide is produced in the production of acetic acid creating a loss of carbon (dry matter loss or shrink).
Silo-King is available as a dry, granular or water soluble treatment product depending on the producer’s needs. Both versions are formulated with Agri-King’s proprietary combination of bacteria, enzymes, antioxidants and potassium sorbate. Silo-King has been researched and developed for over 45 years. Dave Spangler comments: “Forage research never takes a vacation at Agri-King; as the feeds have evolved over time, so has the Silo-King formulation responding to those changes. Agri-King vows to never stop researching forages and forage treatments because Agri-King’s rations feed the animals consuming the treated forages and grains.”

Maximiser Enzyme Supplement
Maximiser®, a feed grade enzyme product, is included in the ration taking the next step to improving feed efficiency with beef animals (details with regard to Maximiser can be found in the July 2014 issue of American Cattlemen on page 32). The enzymes in Maximser are designed to make the shift from enzymatic action on a single feed ingredient (forage or grain) to aiding in the digestion of a complete ration. In this way, the enzymes in Maximiser continue the work performed by the enzymes in Silo-King® to provide more nutrients to the animal and spare energy that can now be used for gain/performance rather than digestion.
Previously, we reported on a large independent Maximiser trial using steers and mentioned we had just concluded a large independent heifer study with Maximiser (American Cattlemen, July 2014, page 32). The details of the heifer trial are outlined below.
A 62 day growing study was conducted utilizing 1146 heifers. All heifers received 200 mg per day of Rumensin®. The control group received 0 g of Maximiser and while the enzyme group received 2.75 g of Maximiser per day. The basal diet had the following composition: (insert Table 1)
Feeding Maximiser concluded the following results: (insert Table 2)