Silence is golden! Stress-free weaning is an achievable outcome. 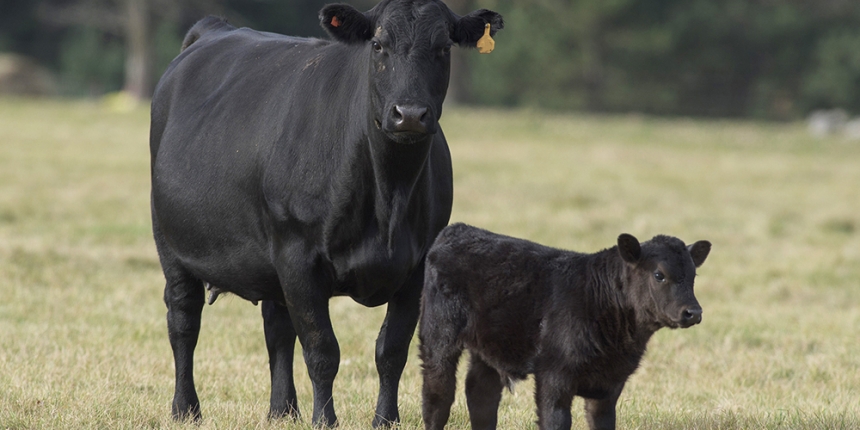 Silence is golden! Stress-free weaning is an achievable outcome.

With decades of experience in the beef and dairy cattle business, Minnesota based Christina Traeger has first-hand knowledge of every calf weaning method known to man. Like many ranchers, she was used to hearing unsettled, bawling calves every year at weaning time. But all that has changed in recent years and weaning time on the Traeger ranch is now blissfully quiet and relaxed.

Traeger believes the secret to stress-free weaning is the use of nose-flaps in the calves. Nose-flaps are a simple, plastic, fan-shaped device that can be fitted onto a calf’s nose, much like the way a metal tongs can be fitted on an animal’s nose. The flap does not pierce the skin, instead it ‘grips’ the nose. This feature makes it stress-free and simple to insert, while also allowing the flaps to be easily removed after weaning for future repeated use. “We were skeptical at first,” Traeger says, “but the flaps are now an essential management tool of our system.”
Unlike the conventional method of weaning by abruptly removing the calves from sight and earshot of Momma cows, Traeger now prefers to insert the nose flaps into all the calves, before turning them back out with their mothers for a week to 10 days. The flaps force the cows to wean the calves themselves in a more natural manner. When the calf tries to suckle the cow, the nose flap not only makes it physically difficult for the calf to suckle the teat, it also provides slight discomfort to the cow’s udder; causing her to nudge the calf away and so wean the calf herself over a period of several days. After the gradual weaning takes place, Traeger will work the calves a second time and remove the nose flaps. It is only at this stage that the calves are separated from the cows, and sent to different pasture. 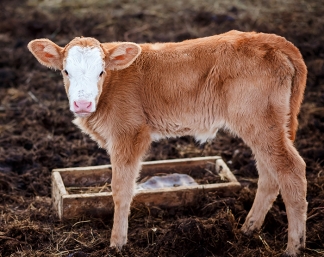 Continued growth
“Some people are automatically put-off by the fact that we need to work the calves twice,” Traeger says, “But taking two hours to insert nose-flaps into 140 calves, and one hour to remove them a week later is a good time investment in my view.”
Time is not the only good investment associated with the nose-flaps. The economics stack up too. Traeger, who direct markets all the beef from the 400 head British White herd as ‘grass-fed beef’, has carried out a private study on calves weaned with nose-flaps, compared to calves weaned conventionally. “Our steers weaned gradually with nose-flaps were 200lbs heavier at slaughter weight, and finished between 60 to 100 days earlier than the conventionally weaned calves,” Traeger explains. Impressed by such a stark contrast between the male calves, Traeger examined the female replacement stock and found that nose-flap weaned heifers had better conception rates at first breeding and needed less calving assistance than conventionally weaned calves. “The nose-flaps allow the calves to keep gaining weight all the time,” Traeger says. She believes the gradual weaning of the heifers allows them to be larger and more mature at breeding, which carries through to less problems in later-life. With gradual weaning, less feed is required to grow out youngstock as they don’t get ‘checked’ and simply continue to thrive.
Traeger also believes that meat quality is influenced by the weaning process. “In conventionally weaned calves, the stress and weight loss results in the calves burning off fat. The gristle found within steaks can be traced back to calves burning off Omega-3 fats during times of stress. The gristle remains as a type of scar tissue,” Traeger explains.

Delayed Weaning
Having challenged the stereotype of conventional weaning in preference for gradual weaning, Traeger has also gone one step further and over the past few years has carried out ‘delayed weaning’. “The industry norm is to wean at seven months of age, but if we look at nature, and especially deer, they don’t wean their fawns until almost a year old. If delayed weaning works in nature there must be a benefit behind it,” Traeger says. She now allows calves to run with cows until ten months of age, before starting the gradual weaning process. Even though Minnesotan winters can stay 20 below for weeks on end, Traeger has found that cows require little extra feed to maintain both themselves and calves at-foot. “When you see the benefits of gradual weaning it shows you that conventional wisdom often isn’t perfect. Our management tools now rely on gradual weaning, delayed weaning in the Spring, and a slightly later start to calving than most producers,” Traeger says. “It’s about looking at your options and having an open mind. We’ve gone the traditional route for many years, but the gradual and delayed weaning is the right option for our ranch. The calves walk away from weaning and never look back.”