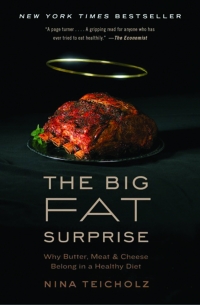 In the New York Times-bestselling book, investigative journalist Nina Teicholz upends the conventional wisdom about fats with the groundbreaking claim that more, not less, dietary fat — including saturated fat — is what leads to better health, wellness, and fitness.

Following a nine-year-long investigation, Teicholz’s startling research demonstrates how nutrition science has gotten it so wrong: how overzealous researchers, through a combination of ego, bias, and premature institutional consensus, have allowed dangerous misrepresentations to become dietary dogma.
The Big Fat Surprise was named a “Best Book of 2014” by The Economist, The Wall Street Journal, Kirkus Reviews, and Library Journal. And Forbes.com hailed it as the “most memorable healthcare book of 2014.” The Economist’s review of The Big Fat Surprise was the 6th-most emailed story in all of 2014, a first for a book review in the magazine.

In the British Medical Journal, a review said: “impressive. . . . This book shook me.” Mother Jones called The Big Fat Surprise “the most provocative and assumption-shredding food book. . . in years” with “exhaustive reporting and lucid science. . . . All in all, a must read.”
Visit www.thebigfatsurprise.com for more information, or to order your copy.

Cellarator Turbo Drench provides cattle with a boost during stressful times, such as weaning, receiving, rehabilitation and transportation. 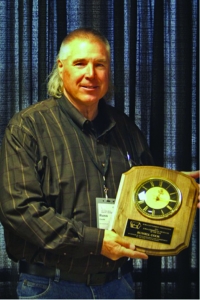 Russell Cook of Mechanicsville was selected as the 2014 Iowa Outstanding Commercial Cattle Producer by the Iowa Cattlemen’s Association and the Iowa Beef Breeds Council.

Cook, who has raised cattle for more than 38 years, has 225 cows in his commercial breeding herd on the family-owned cow-calf and grain farm southwest of Mechanicsville in Cedar County. Like many young people today, Cook began his herd while in 4-H. His father had a cow herd, and encouraged Russell to show heifers as a 4-H project and then begin his own herd with those heifers. While his father worked with him to select Angus heifers for his projects, he learned to use performance records from his cows to make further heifer selections through the years.

“After I got out of high school and started farming, we continued to keep our own replacement heifers (from the calves born to our cows). I am most proud of the fact that of the 225 cows we have now, they’ve all been born and raised on our farm,” Cook said.

Cook has served many years on the Cedar County Cattlemen’s Association board of directors, and is currently president of the group. He’s also been active as a board member of Beef Promotions of Iowa, which manages the Beef Quarters at the Iowa State Fair, and he has served on the Cedar County Extension Council.

As 2015 begins, livestock producers should assess their beef production enterprises for areas that may need improvement to help ensure they’re able to benefit from the year’s high cattle prices for as long as possible, says a beef cattle expert with Ohio State University’s College of Food, Agricultural, and Environmental Sciences.

“But, no one knows how long these historically high prices will last,” Grimes said. “So producers should do what they can do now to make sure that they can take full advantage of the current situation and to make improvements that can carry them forward for years to come.”
The U.S. beef cow herd is at its smallest rate in decades, currently under 30 million cows, which is an 11.8 percent decline from 2007, he said. Add to the equation that exports are increasing in volume and value, and beef’s largest competitors — pork and poultry — are in tighter supply, and beef producers are seeing prices that they’ve never seen before, Grimes said.

“For most beef cattle producers, it been like a honeymoon this year with such great prices, but that doesn’t mean that we should let our guards down on basic best livestock management practices,” he said. “We have to make sure we keep our beef cattle bred, birth live calves and get them weaned because we can’t sell them if we don’t have them.

“We’ve got to keep them healthy so we can get to the point they can be sold.”

• You can’t take advantage of historically high prices for beef cattle if you don’t have the animals to sell.
• Use proven management practices that can help you to improve conception rates, minimize calving difficulties, and increase the percentage of calf crop weaned.
• Cull open or any other unproductive animals with issues relating to disposition, udders structure and performance and replace them with younger, bred females.
• Evaluate the genetics in your herd to determine if they are allowing you to meet your production goals.
• Utilize the breeds and genetics within a breed that will help you achieve your goals.
• Are there management practices not being implemented in your operation because of a lack of equipment or facilities? Improving facilities can improve the quality of life for animals and simplify daily chores for the producer.
• Forages are the single most important feedstuff consumed by beef cattle. Increase forage quality and quantity produced from pasture and hay fields in order to maximize the pounds of beef produced per acre in your operation.
• Minimize feeding and storage losses associated with this valuable product.

“It takes at least 24 to 27 months from conception to consumption, so it’s a slow process to expand a herd,” Grimes said. “The effects of your management decisions can be felt for a long time, so we’ve got to do it right.

“It’s easy to compensate for mistakes when prices are high, so we want to make sure that producers are ready if things change.”

Local governments would be prohibited from placing restrictions on large livestock facilities in most rural areas of the state under a bill being considered in the Indiana Senate.

The bill would prevent county or other local officials from adopting any rules that go beyond what is required by state law regarding the construction of livestock structures in areas zoned for agricultural use.

State Senate Agriculture Committee Chairwoman Jean Leising, R-Oldenburg, said she submitted her bill in response to steps taken by various counties to keep out large facilities that can house thousands of hogs or cows.

“Animal agriculture has been a big part of Indiana, and so the state needs to at least know this is going on,” Leising told The Indianapolis Star. “As far as I know, there hasn’t been any discussion on the state level about the fact these counties are doing this.”
Some environmentalists and local government leaders say the proposal would wrongly strip away local authority.
Kim Ferraro, the Hoosier Environmental Council’s water and agriculture policy director, said the bill could block any local oversight of what she calls factory farms.

Residents in some counties have fought the construction of large animal operations, citing concerns such as declining property values, additional odors and possible health problems from increased water and air pollution.

In rural eastern Indiana’s Jay County, officials discussed blocking the construction of such facilities but decided last fall not to do so, said former county commissioner Milo Miller Jr., who stepped down Jan. 1 after 24 years on the board.

“They say they want the counties to have local control, but it’s ‘Do it our way,’” Miller said. “What kind of local control is that? Who knows what’s best in the county? The state legislature or county officials?”