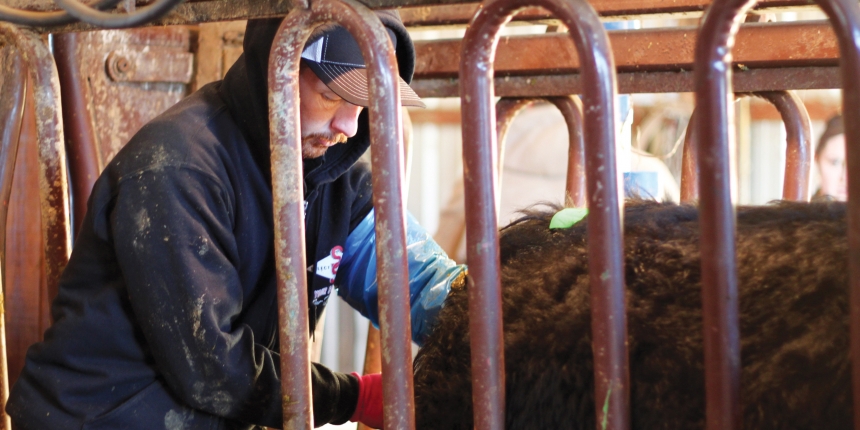 Today we have the technology to selectively breed cows to a desired bull and choose the sex of most of the offspring.  We can create replacement heifers from our best cows, or bull calves from selected matings.

Early research on semen sorting was done in the 1980’s and the first calves produced by sexed semen were born in the early 1990’s. This technology has been continually improving; a cattle producer can figure that at least 90 out of 100 calves produced will be of the desired gender.

Gender selection has been commercially available for two decades in the dairy industry and gaining interest in the beef industry; the number of beef bulls with sorted semen available in the U.S. has increased tremendously during the past 10 years in major AI studs.  The sexing service is provided to bull studs by independent companies.  The one that has been doing it the longest is Sexing Technologies.

Willie Altenburg, who raises registered Simmental and Angus cattle in Colorado, works for Select Sires and says sorted semen revolutionized the dairy industry—using it on valuable cows and heifers to create more dairy heifers. Use of sexed semen in the beef industry has been slower to catch on, but is steadily increasing.

It is more expensive to produce sexed semen than conventional semen, however, and only about 25% of the sperm from a bull can be utilized.  “The companies and researchers involved in the sorting have been trying to identify factors related to sorting that impair sperm quality—since in any ejaculate, the number of sperm cells left after sorting is greatly reduced due to damage during sorting, as well as cells that can’t be sorted,” says John Hall, PhD (Extension Beef Specialist, University of Idaho, Superintendent of the Nancy M. Cummings Research, Extension and Education Center).

“We’ve been using X-sorted semen to produce replacement heifers, in a group of elite cows, and have been fairly successful.  Our pregnancy rates are not quite as high as we’d like, but we’ve been able to change the heifer-to-bull ratio—with a single breeding with sexed semen, followed by natural service cleanup bulls—from a 50-50 ratio in the herd to about 65-35 or even a 70-30 ratio,” he says.  This assures a fairly large group of heifer calves for replacements.

Altenburg says sexed semen may become more affordable in the future as the sorting technology improves. During the sorting process some sperm cells are always lost, and all cells of the undesired gender are discarded, leaving less total sperm cells from the semen collected. The lower sperm concentration can adversely affect fertility, resulting in lower conception rates. Sorted semen at this point still has a lower conception rate than regular AI semen, but does give very good results on the sex.

“Sexed semen allows you to do several things,” said Altenburg. “If you are breeding heifers you can use heifer semen to reduce dystocia (since heifer calves tend to be smaller at birth than bull calves), and can keep replacements out of your heifers because hopefully those will be your best genetics.”

Today there is slightly better conception rate with sexed semen than in the past, and more use of sexed semen when doing embryo transfers. “Conception rate reduction is not as detrimental with embryo transfer because you take that loss up front (you either have a live embryo or you don’t). In other words, if you have a loss, you know it immediately. If you have a live embryo, then it’s good to go,” Altenburg says.

Many registered breeders are using sorted semen with conventional flushes (cheaper than in vitro fertilization with an egg and sperm), and getting embryos produced at reasonable cost. “This is a way to produce embryos of desired sex, which can make a big difference in the value of that calf, especially for seedstock producers who want bull calves. I do this with my own cows and I’ve had great success with it, to produce bulls,” says Altenburg.

The sorting technology is continually being improved, along with conception rates, according to Hall.  “The company that does most of the sexed-sorted semen is now using what they call their SexedUltra 4M product, which is 4 million cells per straw—which is more than they originally had.  They’ve also identified a group of sires with what they call ultra-fertility.  Based on field data, those sires work very well with fixed-time AI and protocols with sexed semen,” says Hall.  One of the frustrations with use of sexed semen has been that conception rates with fixed-time AI have not been quite as good as when doing heat detection.

“What we’ve found through experiments at multiple universities is that the females that respond to the fixed-time AI after coming into heat prior to the fixed-time AI have good pregnancy rates to sexed semen.  Conception rates are 80 to 90% of what we get with conventional semen.  The females that don’t respond usually do poorly with sexed semen compared with conventional semen,” he explains.

“From a management standpoint, we have approached this in two ways.  A group from Missouri led by Dr. David Patterson and Dr. Jordan Thomas several years ago came up with what they call split-time AI.  In this protocol, any of the females that have responded (by showing heat, via use of a heat-detection patch) by the normal time with fixed-time AI are inseminated.  In the cows where heat-detection patches have not been activated, we delay insemination for 24 hours.  If a GnRH injection is normally given, we don’t give that shot to those cows that did not respond.  We wait and give that shot when we inseminate those animals 24 hours later,” says Hall.

“A fairly high percentage of those animals that didn’t respond at first will respond in the next 24 hours.  Thus we are trying to optimize when we are putting the semen into those cows,” he explains.

Some bulls are better candidates for sexed semen than others.  “The AI companies are finding this out.  At this point there aren’t any new tests that work on a regular basis for determining which bulls to select, but researchers are continuing to try to find markers or tests that can be used after the semen sorting, to identify the bulls whose semen is less damaged in the sorting process,” says Hall.

One of the questions often asked is whether semen from any bull can be made available for use as sexed semen or if only certain bulls’ semen is available in sorted form.  Usually only certain bulls are offered by various semen companies, because not all bulls’ semen goes through the sort with optimal results--but many companies do offer this service on any bull the rancher might want to try.

Most semen companies have the capability to sort semen on any bull desired. There are always some exceptions, but basically if a customer wanted this service on a certain bull, and agrees to buy everything collected from that bull, this will work--as long as that bull’s semen will freeze and go through the sexing process.
“The important thing is a bull’s conception rates. As we learn more about the bulls, more of them are becoming available for this use,” says Altenburg.

“A few years ago ABS Global (one of the bull studs) got their own sorting system up and running,” says Hall.  “ABS Global’s technology is different in that they use a laser to inactivate the sperm that carry the non-desired sex.  They can knock out either the X or the Y sperm.”  Thus the remaining sperm will be of the desired sex.

The traditional method, utilized by Sexing Technologies, has been to put dye on the semen, put the semen in individual droplets, based on laser determination whether it is X or Y, and then put an electrical charge on it and separate the semen that way,” he explains.

“Over the years, Sexing Technologies has modified some aspects of their sorting technology and have improved pregnancy rates.  They have also improved the number of calves with the desired sex, but the rate with sexed semen is never 100%.  There will often be a few calves of the other sex; if you inseminate very many cows there will probably be about 10% that are not what you wanted.  In our work there have been years we had 89%, 92%, etc. but it is usually about 90%,” says Hall.

Prices per unit for sexed semen have come down a little, and there are a few more beef producers using it.  “We see more interest in purebred operations.  There are not many commercial operations using it yet because of the decreased pregnancy rates, but some producers are using it strategically.  They may use sexed semen on their best cows to produce replacement heifers, or use it on heifers.  These past few years we’ve been using sexed semen to create heifers from first-calf heifers,” he explains.

“One of the challenges in the beef industry, if you are not in the purebred business, is that it’s harder to have the genetic information, EPDs, genomics, etc. on a commercial heifer that you might have on a purebred heifer, to help you make these selections.  The dairy folks have so much information on their cows that on the day a heifer is born they can tell you whether they want to later have females or male calves out of that heifer when she grows up,” says Hall.

Creating heifers out of heifers serves two purposes; the calves will be smaller at birth and born more easily, and if they have the desired genetics they will make good cows.  “The idea is that this will reduce our generation intervals.  Normally you wouldn’t keep a heifer from a cow until you know that she’s a really good cow.  She might be 5 or 6 years old before you keep a heifer from her to replace her,” he says.  Usually a producer breeds all heifers to a good “heifer bull” but that bull may not necessarily have the best maternal traits; he may not sire what you’d desire for replacement heifers.

“One of the things that has limited our progress in cow herd improvement in the beef industry is what we call generation interval, and if we can keep our replacement heifers out of heifer this shortens those intervals,” he explains.

There are several university researchers trying to improve the synchronization protocols, management strategies or other aspects of sexed semen to make it more useful in commercial beef operations.  The operations that are already using AI are most likely to be successful using sexed semen because they already have experience in trying to maximize conception rates.

“Our advice to producers is that if they’ve never used AI before, they should start with conventional semen rather than sexed semen.  Starting out with sexed semen in an operation that has never done AI tends to set them up for disappointment, and we don’t want that to happen.  We want them to be successful,” says Hall.

For best results, producers should carefully follow the published guidelines for semen thawing and handling, and use highly experienced and trained professionals for the inseminations. 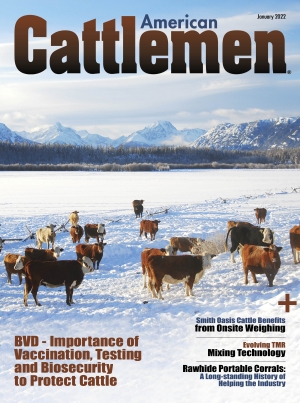