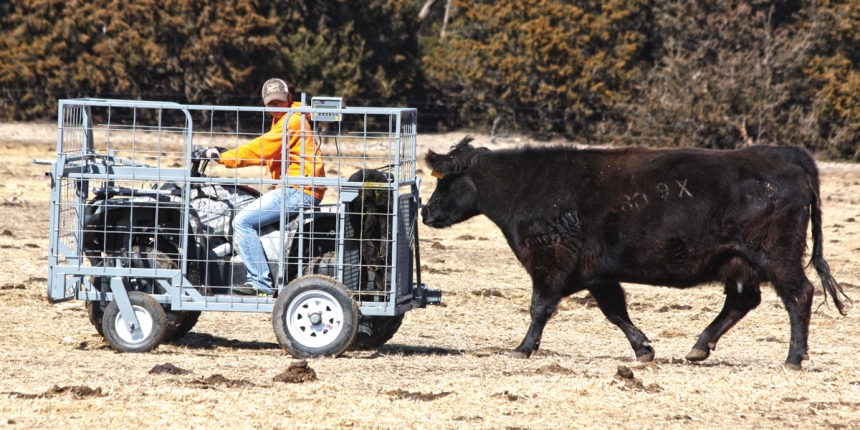 The favorite time of the year for cow-calf producers has long been established as being the calving season. That is when the anticipated results of the previous year’s breeding program decisions are realized. Jeff Creamer, Lazy JB Angus, a calf catcher owner, refers to his calving season as “Christmas Time.” Whether the new calves hitting the ground are from AI, ET or the valued herd sire battery, there is no time of the year that a cowman looks forward to more.

Accompanying that ‘special time’ are dangers, extra stress and increased labor responsibilities that are often referred to as ‘a necessary part’ of the business. Over the years, many people have been injured, or worse, by the instinctive mother cow during the newborn processing period. Things can go wrong fast when tagging, vaccinating, banding and weighing new calves — and the results can be devastating. Bud Williamson of West Virginia says, “My calf catcher was a virtual life saver!’”

Safety Is a Priority

“We are all about safety and making calf processing easier,” states Dan Leo, a long-time Nebraska rancher and owner of the Safety Zone Calf Catcher business. With the average age of cattlemen getting older, help being difficult, if not impossible to find, their calf catchers are filling a real need. Most cattle operations daily use ATV and UTVs, and now they have an important option to ensure that every calving season is safe and uneventful. Laurel Gilbertson, 74-year-old Nebraska rancher refers to his catcher as “The best piece of equipment I’ve owned.”

Leo added, “The traditional way to tag and process calves can be dangerous and often takes more than one individual to accomplish. Now, just one person, who can operate an ATV or UTV, can safely work calves.” Allen Lippert, a Kentucky cattlemen, says his catcher is “Great for one-man operations. No more waiting for help!”

The calf catcher is a durably constructed, welded steel cage that is built to last generations. Bill Helms, a Texas retired mechanical engineer and 71-year-old cattlemen applauds the design and fabrication quality adding “It is simple to use, and it works.” Mounting with ball-coupler hitches permits it to perform well in all types of terrains and conditions. The quick and easy mount and dismount process takes only a couple of minutes.

With the front gate locked open, the driver approaches the calf and captures it in the cage by shutting the spring-loaded gate. Aiding the process, the catcher is designed for quiet operation, thus does not threaten the cowherd. Typically used on newborn to week-old youngsters, but calves up to 300 lbs. can be caught for treatment of pinkeye, foot rot and pneumonia conditions.

The producer enters the cage by stepping through the near side opening, and then moves the calf to the rear holding area where it can be easily processed while being protected from the mother cow. At all times, the operator is inside the cage, and never threatened by the instinctive mother. Daryl Bernard, an Iowa cattleman states, “I like how the calf holder restrains the calf and eliminates having to wrestle the calves on the ground.”

By design, nearly 100% of the mothers remain at the back of the catcher where the rear calf holder is located. The most protective of cows are much calmer when they can see and smell their calf in a less threatening situation, as compared to wrestling the calf away from the mother.

“The unit works particularly well for pairing out as the cow will follow the calf virtually anywhere! Whether moving pairs to another pasture or during inclement weather, it is a valuable tool.” states Leo. When finished processing, the operator releases the calf out the back to its mother, again accomplished from inside the cage to maintain full-time safety. Montana rancher, Andy Dorn says this about his Safety Zone catcher, “It is the best investment we ever made. Easy on the calves and great for the cows too!”

“Traditionally, producers have to get to the calves early after birth otherwise it can be difficult to catch and even hang on to them, and then it can often require two or more people depending on the protective behavior of the mother cow while the processing takes place,” Leo notes. His goal is to make the best time of the year, safer, easier and with the labor requirement of only one person.

Catcher user, Wanda Thompson from Missouri comments, “To all you out there still dodging mad momma cows, wrestling big calves, and maybe not getting some of your calves done, the calf catcher is definitely a better way.”

Other options developed by Leo’s business include a digital, waterproof scale — especially useful to seedstock producers – and a rear tow hitch to accommodate long-distance travel.

Safety Zone Calf Catchers LLC, internationally trademarked and registered, sells directly to cattlemen and through a growing dealer network. Current sales extend throughout the continental U.S. and into Canada, Australia, France and the UK. Leo states, “Our best salesmen are the users as they cannot keep from telling their neighbors of the catcher’s benefits — and the word is traveling fast!”

Interested parties are encouraged to watch the informative action video at www.SafetyZoneCalfCatchers.com or to call (877) 505-0914 for more information or to place orders.