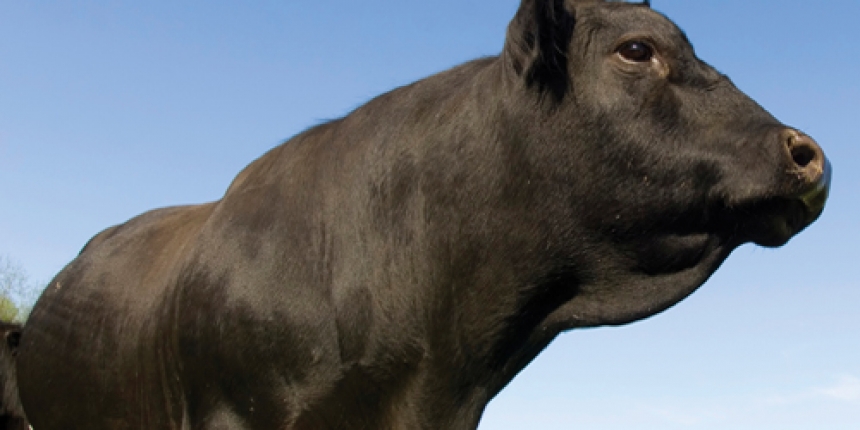 Mess with corn and soybean prices, you get record-high cattle prices.

The world’s top beef producer expects U.S. cattle prices will jump 20 percent to a record next year as rain on grazing fields and corn crops prompts ranchers from Texas to Nebraska to feed animals instead of sending them to slaughter. Beef output in the world’s biggest producing country will slide as much as 6 percent in 2013 because of reduced processing, JBS SA Chief Executive Officer Wesley Batista said in a Nov. 30 interview from his Sao Paulo headquarters. That compares with a 4.2 percent drop to 24.6 billion pounds (11.2 million metric tons) forecast by the U.S. Department of Agriculture last month.

Record corn and soybean prices that followed the worst U.S. drought since 1956 boosted the cost of raising cattle sold to JBS and other major meatpackers, leading ranchers to cull animals. Next year, ranchers probably will rebuild herds and send fewer head to meatpacking plants, creating a shortage of slaughter-ready animals that will boost prices, Batista said.

“Lower grain prices mean ranchers will be able to retain cattle for a longer period, reducing the availability of animals for slaughtering,” said Batista, 42, whose family’s abattoir in western Brazil grew over six decades into a $37 billion operation spanning 10 countries including the U.S. “We believe prices will keep going higher.”

The U.S. cattle herd shrank to the smallest since at least 1973 as of July 1 as ranchers culled herds after the dry spell in the Midwest boosted feed costs. Cattle reached a record $1.32925 a pound on Nov. 23 on the Chicago Mercantile Exchange. Futures are down 1.5 percent from the record at $1.31 a pound at 10:24 a.m. on the CME.

Retail beef prices in the U.S. rose to $4.772 a pound in October, according to the USDA. Wholesale choice beef, high-end cuts that include most steaks, rose to a record $1.9938 a pound on Oct. 24. The price has gained 19 percent in the past two years as droughts in 2011 and this year scorched grasslands in Texas, the biggest producer of cattle in the U.S.

The USDA expects food inflation of as much as 4 percent in 2013, compared with an average of 3 percent since 2004. Food costs, including beef, may rise 5 percent to 8 percent next year for the Louisville, Kentucky-based steakhouse chain Texas Roadhouse, CEO Wayne Kent Taylor said on a conference call with analysts Nov. 1.

JBS, the Sao Paulo-based meatpacker that bought Pilgrim’s Pride Corp. in 2009 and Swift & Co. in 2007, expects to be able to pass on the higher cattle prices through to customers, Batista said.

The company, which gets 76 percent of its revenue from American and Australian operations, raised U.S. beef prices 1.1 percent in the third quarter, according to its earnings report. U.S. and Australian sales rose 3.2 percent from a year earlier to $7.19 billion in the quarter. The overseas units, whose sales the company doesn’t break down by country, also process hogs and poultry.

Batista’s outlook for higher cattle prices depends on prospects for rain in the U.S. next year after this year’s drought, Ryan Turner, a livestock analyst at INTL FCStone Inc. in Kansas City, Missouri, said in a telephone interview.

“If it rains you will see guys hold back and heifer retention will go up,” he said. “The big thing now is when do we start getting rain in the west and southwest and see those herds move back to those areas.”

The rainy weather prospects may not materialize, said Darrell Holaday, the president of Advanced Market Concepts in Wamego, Kansas.

Little rain is forecast for the U.S. southern Great Plains, where cattle graze on grass and leaves from wheat plants, Holaday said. With little or no precipitation through the middle of next year, no pasture land would be available in the spring for cattle and corn prices wouldn’’t fall, he said.

“If in May and June we’re still in the thralls of the drought, which would be so devastating, all of these cattle will have to be liquidated,” Holaday said in a telephone interview. “We’ve had two years of breeding herd liquidation and we will see another huge round of liquidation.”

The U.S. drought has created scenes reminiscent of the 1930s Dust Bowl era as strong winds have caused walls of dry dirt to shut down highways in parts of Oklahoma and Kansas. The dry weather also has sapped water from ponds from which cattle would normally drink.

Because of high corn costs, feedlots bought 2.18 million head of cattle in October, the lowest for the month at least since the USDA started tracking the figure in 1996. Feedlots probably lost about $112 a head on cattle sold in October, according to McHenry, Illinois-based Allendale Inc.

“It’s been a terrible year for cattle ranchers and meat companies,” Batista said. “Hopefully we are heading to a year which will be good for us all.”