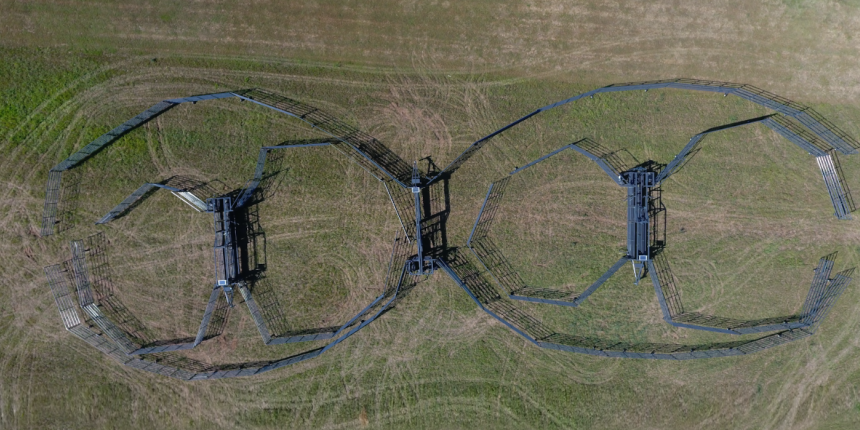 When John McDonald, founder and owner of Rawhide Portable Corral first introduced his Rawhide Original portable corral nearly 21 years ago, his ultimate vision was to introduce an efficient, streamlined corral system that would ease the corral set-up and use on the part of farmers and ranchers throughout the country. Because of John’s continuous focus on product improvement and enhancements throughout the years, agricultural professionals have been turning to Rawhide Portable Corral to meet the corralling needs of their farms and ranches.

Historically speaking, at the time that McDonald had the initial idea for his portable hydraulic corral more than 20 years ago, there was only one similar product on the market, and it was a product that McDonald didn’t even know existed until he was going forward with his product vision and had to explore the patent issues he faced.

In order to develop his own innovative design McDonald learned all he could about the other patent. “So, I knew I was in a good place once I started moving forward with my product idea. I accomplished what I wanted and designed something that would work as a trailer, as well as a rack and had the panels needed to set up a corral.” Twenty years later, McDonald’s Rawhide Portable Corral is still going strong.

So, after two decades of modifying his corrals, John has developed a patent-pending larger corral system that offers the unique Rawhide Portable Corral design to large-scale ranches and farms. The new Rancho Deluxe Corral boasts over twice the capacity of the Super Large Rawhide Processor that the company has been selling for years.

“Throughout the years I’ve always had people approach me and say, ‘Your corrals are great, but they just aren’t big enough for our needs.’ Many of these people are from large areas in Montana, Canada, and elsewhere that work on large ranches. They might ship 800 or 900 head of cattle and our portable corrals simply wouldn’t work for them,” McDonald says.

“I am constantly looking for ways to enhance all our product designs,” McDonalds says. There are 10 portable corral on wheels products in the market in the U.S., and nine of them are my design. It seems like every turn around I get copied. One afternoon my patent attorney said to me, ‘you know every time you make a really good improvement, why don’t you try to patent that?’ So that’s what I’ve been focusing on with the Rawhide Rancho Deluxe.” 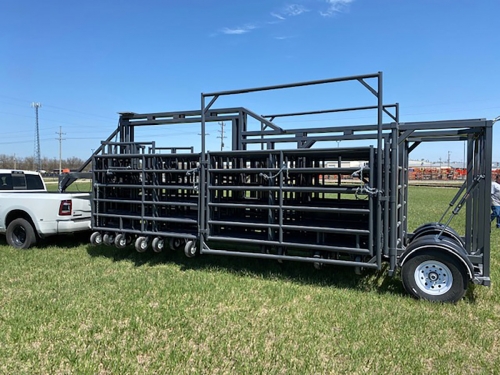 One innovative improvement that McDonald is focusing on is the suspension on the Rancho Deluxe and the Processor. “For more than 40 years, portable corrals have been on the market, but none of them have had the appropriate suspension to deal with the terrain or while going down the highway,” McDonald says. “So now I’m working on a patent pending suspension system that’s going to really help with that.” In addition, due to the weight of the hefty Rancho Deluxe collection, McDonald is also turning his attention to making patent-pending improvements to the racking system to allow for all the weight.

“We are also addressing the issues of leaning panels of the Rancho Deluxe with a new patent-pending wheel system as well,” McDonald says. “The new wheel designs are tapered double wheels, similar to what you see on irrigation pivots. I’ve had issues with the panels wanting to lean too much. So, I’ve actually got a patent pending wheel system. These are the key enhancements that I’m excited about.”

In addition to modifying the rack systems and wheel designs, McDonald has also modified the alley and sorting capabilities of the Rancho Deluxe Corral. The Rancho Deluxe Corral is currently available in three sizes, yet still features the ease and efficiency that the Rawhide Portable Corrals have become known for.

For those producers that want a great catch pen, the Rawhide Processor is an ideal option. The Rawhide Classic features three sizes, (Standard, Large and Super Large) and is a basic catch pen model. This system still boasts fast, 10-minute labor—a hydraulic jack, self-contained power unit and battery with a solar panel, and the ability for the entire system to be driven through with a bale or cube feeder. In addition, throughout the years John has continued to modify and improve the original design of the Rawhide Portable Corral in order to meet the needs of end users. The Classic features a simple, streamlined experience for the farmer or rancher.

For producers that want to work their cattle on site, Rawhide offers the advanced Rawhide Processor model, which is available in multiple sizes, it features a hydraulic alley, to accommodate a wide range of corral needs. The options on the corral include a head gate and loading chute. These systems are ideal for producers who are handling 50 head to 300 head of cattle.

Through the years McDonald has gleaned information from end users and from customers, as well as from the questions he received at various farm shows he attended. Embracing these questions and evaluating the information and feedback he received has resulted in a continuous improvement process that has produced a refined product that truly stands out from the crowd.

Specifically, over the years, McDonald has enhanced the mechanization of the Rawhide Portable Corral while also paying close attention to the longevity and durability of the materials being used. The same can be said for the design of the Rancho Deluxe, which features the same 13-gauge material and durable plastic fenders, that end users have come to admire.

For all Rawhide Corrals, McDonald and his team work with each customer to understand how they plan on using the corral – to sort, load, pre-wean, vaccinate, AI, etc. – to determine the best size and subsequent system components that will streamline the corral’s functionality and versatility specifically for their ranch or farm.

“If I’ve discovered anything during the last 20 years about my product, it wasn’t so much what the end result was when producers got it to their pastures and the continued success they have all over the world with our products,” McDonald says. “Rather, the few places we’ve had some fatigue issues were the result of the innovative ways that end users began using the corral products.

Some end users started thinking outside the box and to do other things with our products, so I had to keep up with those visions with my designs.

Looking Ahead
As the popularity of Rawhide’s new Rancho Deluxe model grows and catches the attention of large-scale ranches both near and far, John, his wife Mary and the entire team at Rawhide have received accolades aplenty from customers near and far as they celebrate their twentieth year in business.

“It’s been so hard on me all these years with copycats, because I put so much blood, sweat and tears into what I was doing with developing my corral designs. This included sleepless nights and worrying about the customers and if the corrals were meeting their needs,” McDonald says. “For a while I thought of abandoning my original design because I just didn’t want to look at it anymore because there were so many copies out there. But I decided to revisit my original design for folks who have a less expensive corral. It’s going well and it looks really good. I love that I have been able to help people working with their cattle with all the corrals I’ve built. I’m the only one that does much exporting of affordable corrals all over the world. And that’s all by design.”