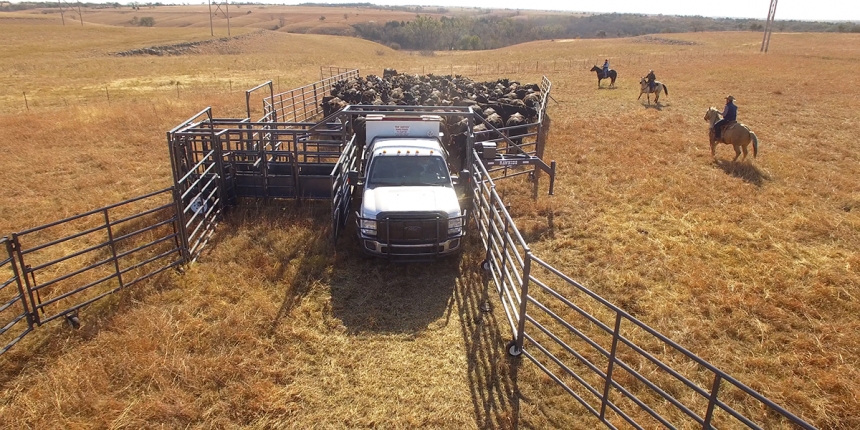 John McDonald knows a thing or two about livestock equipment after working with cattle and rodeo livestock most of his life. Years spent hauling a portable arena across America for televised bull riding events allowed him to put his experience and knowledge to the test when it came to portable corrals. His family will joke about not being able to throw away anything he had notes on, because that item could just hold the prototype idea or drawing for his next big design.

In 2002 John and his family relocated to Abilene, Kansas to fulfill his dream of designing a portable corral that would be easier than the other systems on the market. After working with multiple prototypes and cattle producers in the local area John finally introduced his original Rawhide Portable Corral design to the public at a farm show in Kansas. It could be set up by one person without any lifting and it could be done quickly; yet it could also be pulled down the road at highway speeds, ensuring that no time would be wasted while catching cattle. It was everything he wanted it to be.
John’s wife, Mary, joined the business in 2005 because it was growing at such a rate that he couldn’t handle building the corrals, selling them and all of the office and bookwork necessary. Employee numbers also began to grow as he grew his business; prompting him to move to new locations in Abilene a few times, ultimately landing in the current location in 2013.

Over the years he made changes to the system; some at the request of customers and others just so that it would work better for the producers. The best change he will tell you is the electric over hydraulic lift for every jack on the system. John’s design was the first portable corral on the market to offer the hydraulic lift option.
After selling his original design for five years or so he envisioned an even better design. Customers wanted to do more with the system and he wanted to break away from the copy-cat designs on the market. In answer to this he developed the Processor which offers the same concept of pen configurations as his old design but he was able to make the transport wheels permanent on the system and a manual adjustable alley is standard on every model.  Most customers note the obvious difference is that it’s the gooseneck model of the portable corral.
The Processor continues to be the most popular model and is offered in three sizes for the convenience of ranchers and cattle producers throughout the world. The main feature with this design is the ability to customize the corral upon ordering by including a hydraulic alley, head gate or loading chute. Any combination of options is available on a Processor. Whether you simply want to catch your cattle or process them on site and load them into a trailer from the pasture, you are able to do so with the Processor.
The design of the Processor continues to impress cattle producers with its versatility and ease of use. The permanent sheeted adjustable alley aids with working your livestock, whether it is done on site or in the field. The adjustable alley can be sized from thirty (30) inches down to sixteen (16) inches; either manually or hydraulically.
In 2016 John decided to build his older design again; only this time it had one major change. The transport wheels are now permanent. The Rawhide Original is still a bumper pull model because it is not as heavy as the Processor, but other than that new update it’s pretty much the same. The permanent wheels make the corral much safer as there is no chance of it tipping over like competing corrals. A temporary alley can be made for those that find themselves in need of one. The Original comes in only two sizes, Standard and Large, and does not have the capability of options.
The most notable features of the Rawhide corrals are that they are easy to set up and they are easy to transport. Rawhide means it when they say that one person can open up the corral without lifting a panel. This will continue to be the model as we move forward with our newer designs. 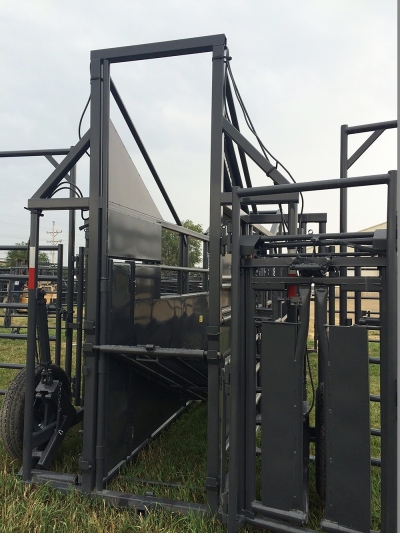 Customers can manipulate the panels so it is not just one big pen, but two, three or even four pens for sorting, as one can never have enough pens when it comes to working cattle.  Rawhide leaves it up to the customer on how they utilize their system. When each customer picks up their system, which Rawhide assures at least 80% of their customers come to Abilene to pick up their own unit and haul it home, they will receive a demonstration.
Some customers are brand new to the product and some purchase a system with knowledge of it after working with neighbors or borrowing someone else’s. With each purchase of a corral the customer receives a diagram of the unit, a bird-eye view so to speak, showing how the panels are configured. The most important part is that it shows how the panels fold up.
Every panel on a Rawhide Portable Corral has a solid rubber wheel positioned in a specific location so that when folded up the panels will all fold flush against the others. This is especially important with the larger size systems as the racks holding the panels are only so big. This ensures that the system is road-width legal and is not considered oversized.
With the diagrams a customer will also be shown different ways they can configure the panels. Again, the system is theirs to do what they want with it and every pasture or field is different. However, the diagrams help with the learning curve.
Rawhide staff will also give a demonstration on a system before the customer leaves. Much the same as the diagram, it helps the customer understand why certain features were added and gives them an idea of what to do with their own. Each customer is encouraged to take the system home and unhook it from their truck, unfold it and then fold it back up at least once before working with cattle. This way they understand the hydraulic system better and are not in a rush.
The electric over hydraulic jack has been so popular that Rawhide now offer customers the option to buy the Hydraulic Lift Kit so that they may upgrade existing equipment of their own. A lift kit includes the jack, power unit, solar panel and the option of including a battery at time of purchase.
John and Mary McDonald run the family business out of their manufacturing plant in Abilene, Kansas; which is where all Rawhide Portable Corral’s are built. They proudly employ thirty employees from around the area and John emphasizes quality work to every one of them.
Many customers want to know about warranty work on a system like this and the McDonald family is only too happy to inform them of theirs. All welding work and assembly is done by their employees so anything that may happen to those welds or to the panels John and Mary will stand behind and call it their Lifetime Warranty.
Other parts on the system that are purchased from vendors including the hydraulic cylinders, transport wheels, power unit and solar panel are given a one-year warranty. If any customer has a concern or an issue, they can simply call Rawhide and someone will help them out.
Two of their three children work at the plant with them, truly making the business a small family affair. When calling in to get information about a unit you will most likely talk to Mary or Ethan McDonald, son, about the corrals; Cassy Wilson, daughter, handles Accounts Receivables, Accounts Payable, Marketing and Human Resources side of the business.
Rawhide Portable Corral, Inc is proud to have corrals in forty-three (43) states and three countries which is a true showing of how these units work in a multitude of terrains. Over the last few years they have worked with a couple of dealers to help get their corrals to other parts of the United States. At this time there are dealers in south Texas, South Dakota and potentially the Idaho, Washington and Montana areas. The corrals are all still built in Abilene.
For more information about Rawhide Portable Corral’s and to view product videos visit the Rawhide website:  www.rawhideportablecorral.com  or find them on Facebook. Phone # 785-263-3436.