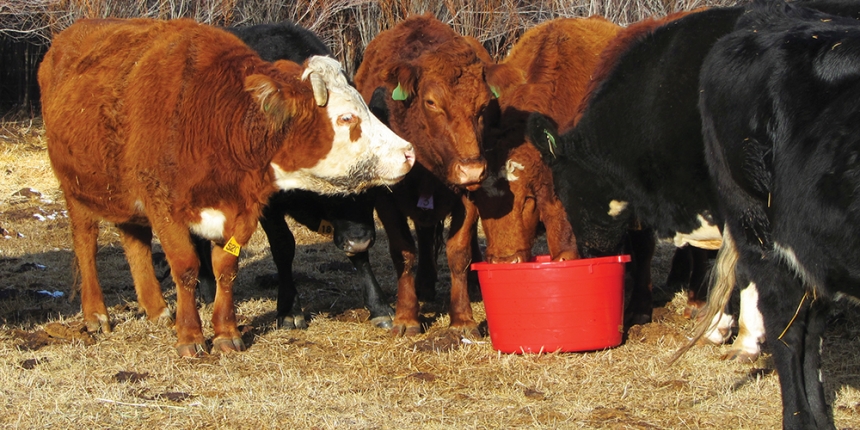 During fall and winter in most regions of the country, mature forages are low in protein, yet many ranchers try to extend grazing as long as possible because winter feeding is the most expensive part of raising cattle.  Adding a little protein supplement to fall and winter pastures is generally cheaper than feeding hay.

Adequate protein level in a ruminant diet is crucial for optimal microbial growth and function.  Rumen microbes are key to unlocking the complex carbohydrates in dried standing forage.  Cattle can lose body condition on dry fall pastures, at a time when they should be building reserves in preparation for winter and next spring’s calving.  Without protein supplementation, the rumen can’t adequately digest the poor quality forages.  Protein supplements, whether supplied in cake, blocks, tubs, or a small amount of alfalfa hay, help improve digestion of low-quality forages and build body condition.

Ken Olson, PhD, Extension Beef Specialist, South Dakota State University, says that whenever forage is deficient in protein, a supplement is needed.  “The key number is 7% crude protein.  In general, the requirement for a cow, even for a mid-gestation dry cow whose calf is weaned, is a little higher than that, but we are trying to meet the requirement for rumen microbes, so they can digest the forage.  That’s our first need, before we worry about the cow,” he says.  If we meet the requirements of the microbes, they will provide for maintenance requirements of the cow.

Derek. Bailey, Department of Animal and Range Science, New Mexico State University, has been doing studies for more than 20 years on use of protein supplements to alter grazing behavior and distribution. “Before I came to New Mexico I was at Montana State University and started doing research with low moisture blocks.  These are protein supplements that contain urea and natural protein sources such as soybean meal and cottonseed meal, plus vitamins and minerals in a molasses mix.  The manufacturers cook it and place it in a vacuum so it dehydrates and becomes very hard.  The mix is often put in barrels, plastic tubs or other types of containers,” says Bailey.

Some supplements are made by putting ingredients under hydraulic pressure to form blocks, while others use additives like bentonite to make them hard.  “We had the best luck with low moisture blocks and compared these with feeding cake.  We also did a study using a liquid, molasses-based protein supplement with a lick wheel.  The nice thing about the low moisture blocks is that you can get them in different sizes and they last awhile out on the range--and cattle love them,” he says.

“We got consistent intake with low moisture blocks.  We did a study in New Mexico where we compared a pressed block with low moisture blocks.  For the first month, the cattle didn’t eat very much of either.  The forage quality was still relatively good and they didn’t want the protein.  Later in the season, the cattle started eating the low moisture block and very little of the pressed block.
“In one of our studies we measured much they wasted when fed cake (pelleted feed).  We fed cake in northern Montana in winter, and sometimes there was snow on the ground and sometimes not.  Feeding the cattle 4 pounds per head every other day, we found there was very little waste.   We recorded where we fed it (with a GPS receiver) and went up a few days later or after the snow melted, going to that exact location to check—examining 10 to 12 feet on each side of the line where we fed.  There was hardly any waste, and most of the waste was just a few cubes that fell into a fecal pat and they didn’t want to eat that.  Otherwise there was almost no waste,” says Bailey.

“When we used a lick wheel it worked nicely, too.  The problem with those is the challenge of hauling liquid supplement around in the mountains--and in the cold weather in Montana it didn’t work very well.  In sub-zero weather, liquid molasses supplements are a challenge!  It’s difficult to haul, and consumption rate was too high—well over twice what the manufacturer hoped.”  It worked very well as an attractant, but the cattle ate too much (which made it too expensive for practical purposes).

“With low moisture blocks, consumption rate was close to what the manufacturer stated, which was between ½ pound and a pound per day.  Often the consumption rate on our cattle was about 7/10ths of a pound.  With the lick wheel, by contrast, they were consuming about 2 pounds daily on a dry matter basis,” he says.

Pellets or “cake” have been one of the traditional methods for feeding protein on winter pastures.  This works well in pastures where you can just drive out anywhere in and feed the pellets.  Frank and Jennifer Beel are part of a family ranch near Johnstown, Nebraska (the third generation) and run about 1200 cows, calving in spring and fall.  “We put up prairie hay in summer, and in fall and early winter rely on grazing the aftermath.  We start feeding fall-calving cows and their babies hay in late fall when weather turns bad, but our spring calving cows are on pastures we save for winter grazing,” Frank says.

His family has used cake as a supplement for a long time.  A Co-op at Ainsworth, Nebraska brings it to the ranch, a semi-load at a time, to fill their bins.  “We have two overhead bulk bins that we drive under to fill the feeder on our flatbed truck, and scatter it with a cake feeder mounted on the back of the truck.  The feeder holds about 1200 pounds.   We feed about 3 pounds per head, every other day, to our cows,” he says.

“The cows really like the cake, and come to the truck.  It’s a very palatable pellet and they don’t waste any.  We try to feed on grass or firm ground on the meadows.  If we get into a patch of sand or mud we shut off the feeder (from inside the cab) until we get onto good ground again and turn it back on,” he explains.

Even if it snows, there are usually places where snow has blown off, where cake can be fed on grass.  “Once in a while we might have to quit caking for 3 or 4 days if snow gets too deep, but usually after the cattle tromp around, we go back to feeding.  If there are no areas where snow has blown off, we just go down the windrow where we’ve fed hay earlier, and put cake on that area, or go down the tractor tire track and feed cake where the snow is mashed down,” he says.

“The cows don’t waste any; if you go back afterwards you can’t find any they missed; it’s all cleaned up.  The fall calves eat with their mothers and learn how to eat it.  We used to wean our fall calves the first of March but figured out it was cheaper to leave them on the cows a few more months.  The cows teach them how to graze and the calves stay healthier, out on the pastures with their mothers,” Frank says.

“The cake is easy to use and the company makes it with all the minerals and vitamins our cows need.  They custom make it to what we want.  If we want to boost vitamin A during calving season, they do that for us.  They also have different levels of protein and we choose the most economical level that fits our operation and what our cows need,” he explains.

“What a person chooses as a supplement often depends on cost of high-protein feeds in your area,” says Olson.  “Here in the Dakotas and upper Midwest where we have ethanol plants, distillers’ grains are often our most economical source of protein,” he says.  In western states, alfalfa hay is often the most cost-efficient protein unless cattle are on mountain pasture where you can’t haul hay to them, or on a Forest Service or BLM allotment that doesn’t allow feeding hay unless it’s certified weed-free.

“Some producers use pelleted alfalfa, which destroys viability of any weed seeds.  Dehydrated alfalfa pellets are usually 17 to 18% crude protein,” he says.  Pellets can often be more easily transported to mountain pastures than alfalfa hay.

Lick tubs can work, if cattle don’t over-eat or under-eat.  “With young stock, it can be a challenge to get them to use tubs.  They may not consume enough, whereas some of the older cows will just stay there and eat from the tubs and won’t go graze.  You need to monitor cattle and know what they are doing and their rate of consumption.  You want to know how many days it takes for them to empty the tubs, and how many cows, so you can calculate how many pounds per cow per day—to get a sense of whether they are eating enough to meet their requirements, or over-eating,” he says.

You may need multiple tubs at each site, so several cattle can use them at once.  Otherwise dominant older cows may consume most of the protein and keep timid ones away from it.  It’s never a perfect situation, and it takes time and effort to manage a supplement.  You can’t just haul it out and forget about it; you need to know how the cattle are utilizing (or not utilizing) it.