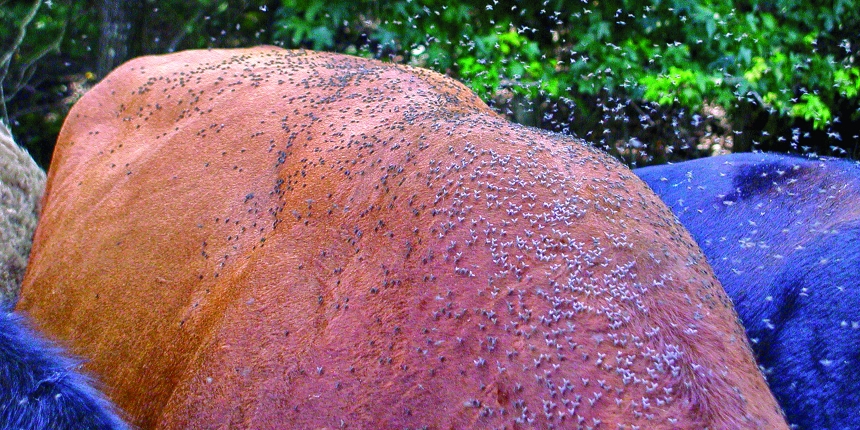 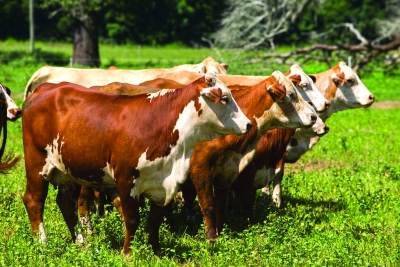 Cattlemen know that protecting their cattle and operation from any potential threats is essential to remaining profi table and productive. What many may not realize is just how impactful one of those threats — beef heifer mastitis — can be.

Mike John, director of MFA Health Track Beef Alliance, owner of John Ranch, Inc. and former president of the National Cattlemen’s Beef Association, discovered that beef heifer mastitis, a disease that can be spread primarily through horn-fly bites, can lead to the development of blind quarters in the udder, severely limiting potential milk production. To prevent the condition from affecting his herd, John decided to address the problem at its source, developing a horn-fly control program built around Altosid® IGR.

“I’ve been in the beef business my whole adult life and hadn’t really thought about flies having an impact on milk production because you don’t really think about that with young heifers,” says John. “A horn-fly treatment program featuring Altosid® IGR made so much sense to me,because you’re not just killing the flies on the surface. Over time, you’re significantly reducing the overall problem,” he added.

Altosid® IGR is a feed-through fly-control solution that, when fed to heifers in their mineral supplement, moves through the digestive system and works in their manure, where horn flies lay their eggs. There it breaks the fly life cycle of eggs–lavae–pupae–adult flies, effectively limiting future fly populations and reducing the incidence of mastitis in the herd. Controlling horn flies is crucial to protecting the health of all mature cattle in the herd, but it might be of greatest importance for the replacement heifers that represent the future profitability and production on a beef operation. In fact, a replacement heifer should be the highest quality animal in the herd, driving the herd’s future productivity.

Toward this end, a heifer with a healthy mammary system will allow the animal to join the herd with a head start, helping the heifer reach her genetic production potential. The return on the investment made in raising these heifers will not be known, however, until maturity and calf weaning begins. In that gap, heifers are left to fend for themselves, which puts them at the mercy of hornfly populations and the risk of diseases they spread. If an unhealthy replacement heifer with damaged teats is introduced into the herd, it creates a serious threat to an operation’s productivity and ultimately the cattleman’s bottom line.

According to Dr. Stephen C. Nickerson, professor at the University of Georgia College of Agricultural and Environmental Sciences, 75% of heifers have some kind of teat or udder infection before they calve — with bacteria spread by horn flies accounting for 50% of those infections. Horn flies are a vector for disease and bacteria, including Staph. aureus, the primary cause of mastitis. These flies are known to take up to 20 to 40 blood meals per day, presenting the opportunity for disease to spread widely throughout the herd. Beef heifers reach puberty around the age of 8 months and are ready to be bred at 12-14 months.

As heifers develop, estrogen and progesterone levels increase. It has been documented that, as estrogen levels increase, so does horn-fly irritation. These are critical months where disease-spreading horn flies can be a threat, but are often not given the full attention they require. If infection occurs while the heifer’s mammary gland is still developing, extensive damage can be done to this tissue, resulting in her never being able to meet her genetic potential. At 24 months, the heifer should be ready to give birth, producing milk for the new calf. If mastitis has developed in the heifer as the result of horn-fly bites, it will likely lead to blind quarters in the udder and limit the cow’s milk production. This typically isn’t discovered until the new calf begins to feed, but at this point it is too late. 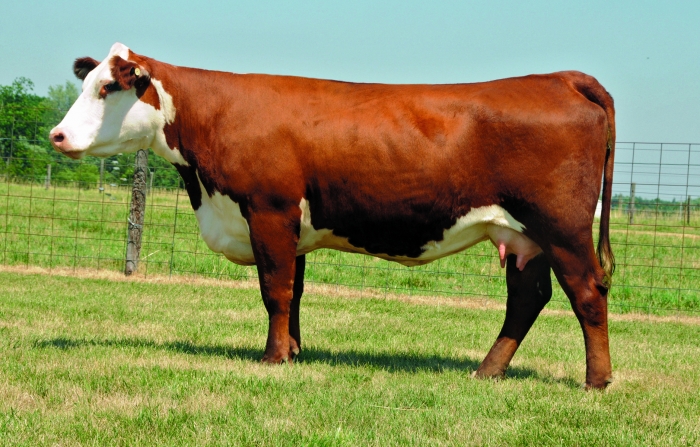 The Impact of Mastitis

Mastitis in heifers can impact the operation in multiple ways, with the decrease in future milk production being the greatest concern. Decreased milk production directly translates to lower weaning weight of calves. As we’ve discussed, horn flies are the primary source for the spread of this destructive disease throughout the herd. The pests move around the teat and travel from animal to animal, carrying the bacteria along with them. Horn flies can live two to four weeks, taking up to 40 blood meals a day. Their painful bites eventually develop into scabs where the bacteria that cause mastitis can incubate. The bacteria then enter the teat and move upward into the quarter, destroying milk-producing tissue.

The destruction of this tissue eventually leads to blind quarters in the udder, a significant factor in reduced milk yields. Studies show that milk yield accounts for more than 60% of the variation in calf weaning weight. Given the impact on weaning weight from mastitis-induced blind quarters, horn flies can significantly affect an operation’s profitability. With damage from horn flies potentially responsible for losses as high as 50 lbs. per animal, the cost can reach as high as $45* per head in a season (*assumes value of $.90 per pound). The economic losses from horn flies alone cost the North American cattle industry over $1 billion every year, underscoring the importance in controlling the pests on an operation.

Understanding effective horn-fly control begins with understanding the pest’s life cycle. Female horn flies that have been biting and taking their blood meals, moving from animal to animal and spreading disease, eventually leave the animals to lay their eggs in fresh manure. One to two days later, the eggs hatch into larvae; then after three to five days the larvae pupate. In untreated manure, pupae will molt into adults six to eight days after that, becoming the next generation of biting horn flies. Disrupting this life cycle is an essential component of any effort designed to control horn flies.

This is true for many insects, as first discovered by the founders of Central Life Sciences who developed Insect Growth Regulator (IGR) technology more than 40 years ago. The company continues to advance this technology through its product solutions, including Altosid® IGR, a product designed specifically to break the horn-fly life cycle. Altosid® IGR features an active ingredient that mimics naturally occurring insect biochemicals that are responsible for insect development, preventing larvae from maturing into biting, breeding adult flies.

This active ingredient keeps doing its job in the manure all season long, as long as it continues to be included in the feed. All producers need to do is work with their feed dealer to make sure Altosid® IGR is added to the herd’s mineral supplements beginning 30 days before flies are likely to emerge, and continuing until 30 days following the first frost. This “30/30” routine, along with standard cleaning and repair measures as part of an integrated pest management program, will ensure season-long control, season after season.

The EPA considers Altosid® IGR to be a biochemical pesticide, able to exert its effect at very small concentrations. That makes it an ideal fly control choice for today’s environmentally conscious producer. Because it is target-specific, Altosid® IGR poses no safety risk to the cattle, other mammals, or birds. It also provides producers with protection against damaging horn flies without worrying about resistance. By passively controlling hornfly populations where they start, horn flies won’t reach the point of critical mass where comfort, health and productivity are impacted. That can eliminate the need for other methods of fly control such as back rubbers.

Cattle producers know full well the damaging impact that horn flies can have on the comfort and profitability of the current herd. As more research becomes available, they are also realizing the negative effects the pests can have on the future of the herd. Alex Johns, natural resource director for the Seminole Tribe of Florida, Inc., is a convert to Altosid® IGR feed-through protection. “I never gave much consideration to horn flies causing mastitis in the beef herd until I learned about it leading to blind quarters,” he says. “We began an Altosid® IGR fortified feeding program nearly five years ago, and since that time we have seen less and less blind quarters in our herd.”

Some feed-through fly control products — even those based on IGR technology that breaks the fly life cycle — do not offer the targeted protection against horn flies found in Altosid® IGR. These other products may work well to control other nuisance flies, such as house flies. But other nuisance flies simply do not inflict the same type of damage as horn flies. Only by controlling horn flies can producers reduce the occurrence — and impact — of mastitis and blind quarters in their herd. By implementing a targeted horn-fly treatment program established around Altosid® IGR, producers can keep cattle healthy and productive now and for generations to come.

Dr. JoePest Management Considerations for your...

Controlling Flies on Pastured Cattle. Did...