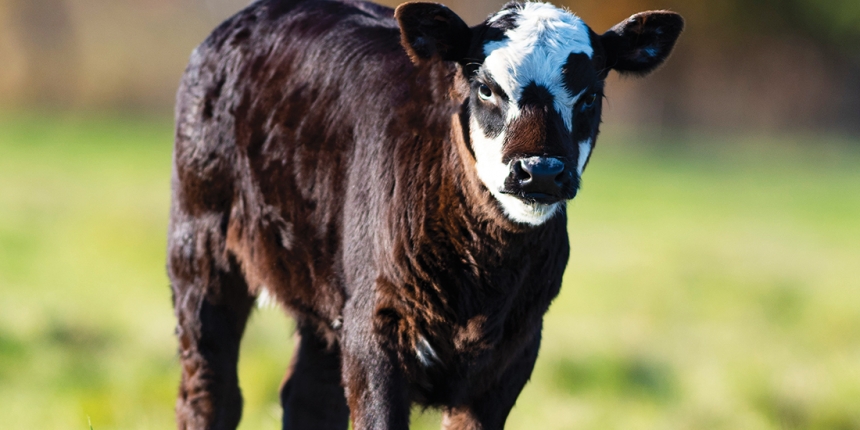 Calves staying healthier during their first weeks of life if they get good-quality colostrum soon after birth, containing antibodies against pathogens they may encounter.  If the dam has high levels of antibodies before calving, she can pass temporary immunity to her calf. Vaccinating the cow ahead of calving can help her build those antibodies.

Dr. Shelie Laflin, a veterinarian/rancher, says the cow starts collecting antibodies into her mammary glands about 4 to 6 weeks prior to calving.  “This gives us an idea about when we should give pre-calving vaccines.  Since it takes about 2 weeks for an animal to respond at maximum potential to vaccination, we’re looking at a minimum of 8 weeks prior to calving for giving the vaccine.  If given too close to calving, you won’t get much effect,” she explains.

Choice of vaccine will vary depending on the diseases a ranch is encountering in the calves.  If you have problems with toxic inflammation of the gut (enterotoxemia) caused by Clostridium perfringins) in calves, a Clostridial vaccine would be appropriate.  “If it’s a scours problem, certain vaccines can be helpful, but no vaccine can make up for poor management.” The calves need a clean environment as well as protective antibodies.

Dr. Steve Hendrick, Coaldale Veterinary Clinic, Coaldale, Alberta says that in many herds pre-calving vaccinations means scours vaccines.  “Some people are also starting to add BVD-IBR vaccines to that program,” he says. There are killed virus vaccines and also now some modified-live virus vaccines labeled for use in pregnant cows that already have some immunity from earlier vaccinations.

Can Vaccination Cause Abortion?
If abortions occur in late pregnancy, some producers wonder if it was because they vaccinated the cows.     “There is always the question about how well protected the animals are, when you start giving modified-live virus vaccine to pregnant cows.  We see some abortions in herds that have gone this route.  The question then is whether the cows didn’t have enough immunity when they received the vaccination or was it the fault of the vaccine?” says Hendrick.

Sometimes cows are given several different vaccines at once.  “In some herds they are being given a scours vaccination along with the clostridial and BVD-IBR vaccine.  Perhaps in some cases this overwhelms the cows’ immune system,” he says.

“The E. coli in scours vaccine is a gram negative bacterium. This means the bacteria have an endotoxin within the cell wall that is released when the bacteria die.  This toxin can make the cow sick. That vaccine, by itself, isn’t enough to make the cow sick.  But the clostridials and even some of the BVD vaccines, with lepto, etc. will have some other gram negative bacteria added to all this.

The more vaccines with gram negative bacteria that we give the cow at one time could possibly be detrimental and potentially make her abort.  I worry when we throw so much at these cows at the same time,” says Hendrick.

Vaccination should be tailored to your own herd.  Work with your veterinarian on a herd health program that fits your situation.  “Consult with your vet to know what’s safe to give your cows pre-calving,” he says.

If you purchase cows or bred heifers and don’t know their vaccination history, be careful what you give them.  “In these cases we generally use a killed vaccine rather than modified-live, just to be safe, and then give them the modified-live after they’ve calved and before they are bred again,” says Hendrick.

Vaccines To Prevent Scours
“Scours vaccinations can be beneficial in herds that have certain problems.  There are limitations, however, regarding what the vaccinations cover and which problems can actually be helped,” he says.  The important thing is to have healthy cows, with strong immune systems, to produce strong calves that can take full advantage of antibodies in colostrum.  Sometimes cows are unable to develop immunity when vaccinated, especially if they have inadequate nutrition.

Some types of scours vaccines provide more protection than others.  Dr. Eugene Janzen, University of Calgary, says the E. coli vaccines work well, but today may not be necessary unless cows are calving in confined/contaminated areas.

“Some of the viral fractions of the pre-calving vaccines, such as the rotavirus and coronaviruses, may not perform as well as the E. coli vaccines, and timing is more critical,” according to Janzen.  “If calves will be at high risk between 2 to 4 weeks of age for viral infections, make sure that there will be enough antibodies in the colostrum to help them.”  The cow needs peak antibody levels when she calves, to have enough passive immunity for the calf to give him protection that long.

“With those particular viruses, if you boost the cow’s immunity, those antibody levels rise fairly quickly and are deposited in the colostrum fairly quickly.  But they also wane quickly.  If you vaccinate cows in early February and the majority of your calves arrive the end of March, efficacy of that vaccine will be compromised,” says Janzen.  You’d need to vaccinate the cows closer to when their calves will be at risk, or give a booster shot closer to that time.

“If calving is strung out, and especially if it’s in confinement rather than out on pasture, we encourage ranchers to vaccinate the late calvers again,” explains Janzen.  You want peak antibody response at the proper time to help the calves.

Some products are a combination, giving protection against rotavirus, coronavirus and E. coli in young calves. There are several brands and types of scours vaccines.  “Talk with your own vet to know what might be recommended in your situation,” says Hendrick.  “The timing for these may also differ, depending on the type of vaccine,” he says.

There are differences on what the manufacturers recommend regarding timing, and some need a two-shot series the first year, and an annual booster thereafter.  Some types of vaccine may require a booster for any cows that calving late—in case immunity is waning before they calve.

“Boostering at least on an annual basis can help maintain immunity.  If you skip a year or two during the life of a cow and then come back with another vaccination, it may not give much protection.  You need to start over with a two-shot series,” Hendrick says.

“We encourage ranchers to vaccinate the cow herd for Clostridial organisms, especially perfringens, since perfringens occasionally cause various enterotoxemias,” says Janzen.  “Some of the perfringens (like Type C and D) can cause toxic gut infection,” he says.

“There are many vaccines, with many label claims.  E. coli vaccines work so well that we tend to think everything else should work in similar fashion, but it’s not that simple.  Some of the diagnoses regarding diarrhea in calves are not definitive.  Most of the time we don’t know with certainty what we are dealing with, and we just play the odds,” he says.  In some herds, other types of perfringens can cause toxic gut infections (such as C. perfringens type A or E) and those are not included in the 8-way clostridial vaccines.  If one of these has been diagnosed in a herd, a separate vaccine or an autogenous vaccine can be used.

Selecting The Right Product For Your Own Situation
Dr. Chris Chase, South Dakota State University, says that when we are trying to improve colostrum quality in terms of timing (when to give the vaccine) it depends on the type of product being used.

“It is important to have maximum titers a few weeks ahead of calving.  Titer level reflects what you will see in the colostrum.  The antibodies are not produced in the mammary gland; they are transported from the cow’s bloodstream,” he explains.

“The mammary gland has specialized receptors to snag the antibodies.  Those receptors start to show up about 4 to 6 weeks before parturition but their ability to concentrate antibodies is highest about 2 to 3 weeks prior to calving.  This is when you want the cow to have peak antibody titers.”

If you vaccinate too early and the cow reaches peak level a month or more before calving, you will miss that window.  “But the thing that’s important is the type of product you use.  Vaccines that contain oil as an adjuvant will give antibody titers that last longer than vaccines using a different type of adjuvant.  Thus your choice of product may depend on when you have the opportunity to vaccinate the cows,” says Chase.

The vaccines that don’t use oil can get you into a problem if your calving interval is fairly long.  A single vaccination might be adequate if calving season is short, but if it’s 60 days or longer, the cows calving toward the end will  have very little antibody compared to cows calving in the first part of the season.  If you used a product that doesn’t have an oil adjuvant, consider re-vaccinating any cows that have not yet calved, to boost their titers so their colostrum will be more protective for their calves.

“When dealing with oil-based products, however, you typically have to give those earlier (farther ahead of calving) than when using the other types of vaccines.  Almost all products require a 2-dose series the first time (for heifers, and for any cows that have never had the pre-calving vaccination).  If you are giving 2 doses, the first one needs to be at least 10 to 12 weeks away from calving, and the second one about 4 to 6 weeks out from calving.  In subsequent years you only need a single dose, which should be given 4 to 6 weeks before calving,” he explains.