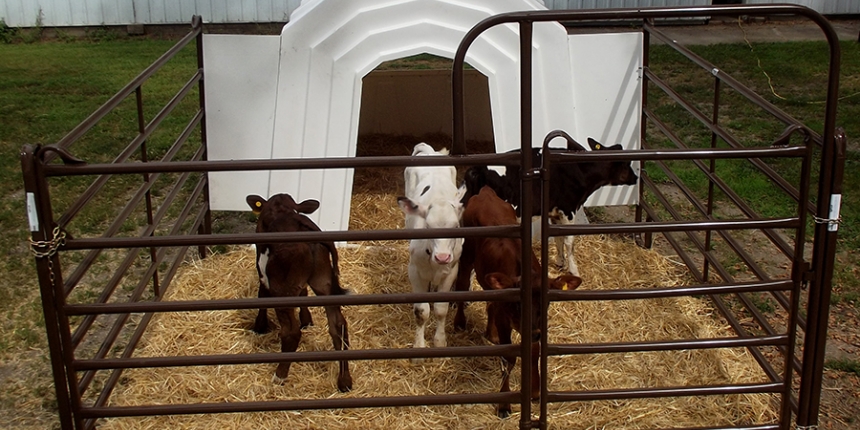 Since 1972, PolyTank, Inc., which is located in Litchfield, MN, has been a prominent name in the rotomoulding world. Over that time, PolyTank, Inc., has developed a division of products under the name PolyDome (www.polydome.com) that have been helping dairy producers improve the health of their dairy herd by offering a range of products specifically designed to produce stronger and healthier calves.

Cornerstone of their products is the series of calf huts that help reduce the impact of cold stress on nursery calf growth and health. Tony Robertson, who has been with PolyTank for 35 years and manager for the past 25 years, notes that dairy producers both large and small across the country believe in the benefits of the PolyDome calf huts. “We have one facility with 2700 huts to take care of their calves.”
To provide research data to show the positive impact of the calf huts, PolyDome has worked with several university studies over the years that show calves housed in Poly Dome huts were healthier and grew faster than calves housed in modified wood hutches. One such study conducted by Noah Litherland, an assistant professor of dairy cattle nutrition at the University of Minnesota Dairy Research Center, analyzed the average daily gain of nursery calves over a several year study (2009-2012). Litherland attributed part of the success of the nursery calves with the use of the Big Foot Calf Hutch. “The hutch had the adequate room for nursery calves to grow and develop, along with being rugged, durable and easy to sanitize between calves. The hutches are heavy duty, but light-weight enough for an individual to move them by hand. We also used the new born calf warmer and several super huts for newborn calves and weaned calves respectively.”
Meanwhile, Dr. Kenny Moellers, a veterinarian and longtime dairy producer in northeast IA, also sees the benefit of using PolyDome products. “We began using the Big Foot nurseries about seven years ago. We now have about 800 of these and find that their bigger size makes it more comfortable for the calf and easier to handle the bedding.”
Moeller utilizes the nurseries after the newborn calves have spent their first five weeks in a large heated building. At that point, the calves spend their next four weeks in the Big Foot nurseries where they are enclosed, protected and dry. “It is much easier to handle them in an individual nursery. During this time, we transition them from a milk diet to a high protein calf diet. By the fourth week, they are feeding well. We also give three vaccinations during this time frame.” 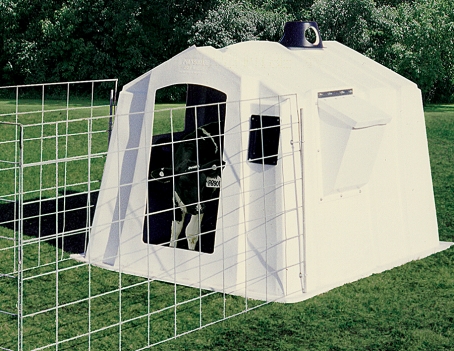 After this time period, Moellers will transition the calves to the Super Hut that can handle up to six calves per hut. With 84 of the Super Huts, Moellers keeps the calves in these huts for another two to three weeks.

Product choices: PolyDome Calf Nurseries
PolyDome Calf Nursery – The perfect choice for the newborn calf. It is considered the warmest hut on the market and the perfect choice during the colder months.  During the day, the bed pack absorbs sunlight so that this stored heat keeps the calf warm at night. Unlike open huts, temperature change is controlled over a longer time to reduce stress on the calf. It’s perfect even in variable climates and stops snow and wind penetration, thus preventing frozen ears and tails. The calf stays dryer and cleaner and there is no snow to shovel out or mud tracked in. No more re-bedding after snow and rain. Made of high-impact UV stabilized polyethylene, it measures 86” in diameter and 60” high. It weighs about 100 pounds and is easily stackable.
Poly Square Calf Nursery – This square hutch is wide enough and long enough for a calf to lie in the center, away from the cold radiation of the walls. The Poly Square has inverted ribs for better wind resistance and a wider stance for better stability, along with the Center Roof Vent, the leading vent system on the market today. Peter Leonard from the Vermont Technical Institute asserts, “The point that seems to differentiate these hutches from others on the market is the rotating air vent at the peak.”
Poly Square Big Foot Calf Nursery is 12” longer (7’ 6”) than the Poly Square. It is constructed of opaque material to eliminate the solar effect, blocking out the sun’s heat but not the sunlight.  It has the biggest sleeping area (38 square feet) than any calf hutch on the market today.
Convertible Indoor Calf Nursery – This whole new approach to calf hutches is meant to be used indoors to keep calves separated to prevent disease and promote healthy growth. Works well in colder climates where outdoor hutches do not stay warm enough in the winter. 50” wide x 89” long and 41” high, it is stackable and weighs about 80 pounds.
One-Piece Super Hut – The newest member of the Poly Dome line of shelters, the One-Piece is 8’ x 9’ x 6’ tall. Totally free standing that allows several door size openings to accommodate for animal size. Up to six calves can be held comfortably. Several options are available.
Poly Dome Calf Warmer – This provides a comfortable environment for newborn calves for the first few hours after birth. The top section is hinged and can be removed for calf entry. The floor is raised and slotted for easy heat circulation of the entire unit. A vent/peep hole at one end allows for proper ventilation and viewing the calf without the opening the unit. Comes complete with a high performance, 110-volt heater with three heat settings and two fan settings. 24” wide x 50” long x 45” tall.
Another popular product has been PolyDome’s series of Bulk Bins. Bulk Bins are the perfect choice for handling high-moisture corn, soybeans, and other granular materials. They are made of high density polyethylene, which will never rust or corrode. PolyDome Bulk Bins will always remain clean and attractive. At the same time, the interior surface is very smooth to reduce bridging, and since they are just two-piece construction, there are no rivets and grain-cogging seams to contend with. The translucent polyethylene allows the producer to visually check material line from the outside. In addition, the Bulk Bins have a 22” top opening with a hinged, vented filler cap and a pull rope that allows ground control for filling. Bulk Bins come in several sizes ranging from .5 ton to 8.5-ton capacity.
Dick Johanneck started Polytank, Inc. in 1972 doing custom rotomoulding. In 1977, he began making calf hutches, which became known as PolyDome Calf Nurseries. The agricultural products division of PolyTank was later named PolyDome. Since that time, Polytank and PolyDome have added over 200 products to their line with dealers located across the United States, Canada, and 10 foreign countries.
The rotomoulding process uses hollow metal moulds and powdered polyethylene plastic that become a semi liquid under high heat. The moulds with the liquid plastic inside are spun on both vertical and horizontal axis to form a uniform thickness, or skin on the outside walls, thus the name rotomoulding. The mould is removed from heat and allowed to cool under controlled conditions to avoid shrinkage or warpage. The resulting polyethylene plastic product is resistant to impact, most corrosive chemicals and temperature extremes. The slippery surface makes it very easy to clean. Polyethylene is also environmentally friendly because it can be recycled.
Most PolyDome products are one piece with no seams or sharp edges. The light weight of polyethylene makes even large units easy to lift and move.
PolyDome has their own metal fabricating shop for frames, stands, and supports used with their agricultural products. All metal parts are powdercoated for corrosion resistance.
PolyDome provides a 10-Year Prorated Warranty on all Animal Shelters and Bulk Bins.