PLANTING FOR SUCCESS Byron Seeds Plans for the Future 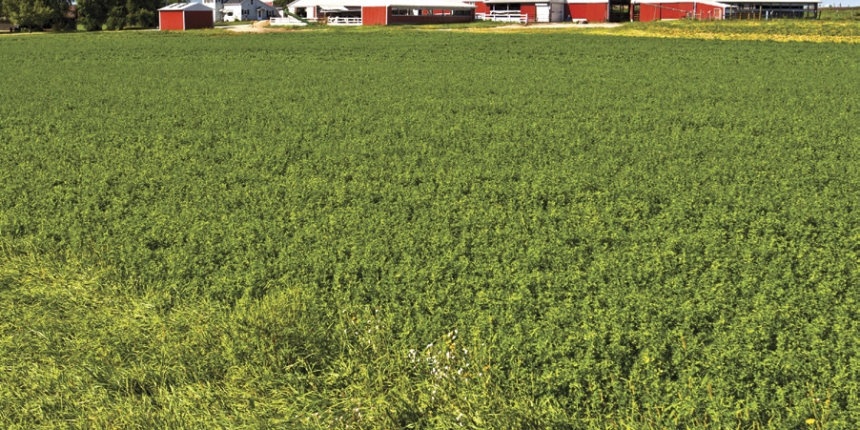 It’s not about the money. I don’t think anyone who farms would say that they do it for the money. Not that money isn’t important, it’s just that people who farm are motivated by something far deeper than just money.

Part of it has to do with identity, those things that we use to define who we are. It’s how I think of myself and how others think of me. Take, for instance, that old 30-30 Marlin that my dad gave me when I was sixteen. It had been his since he was a kid. His instructions were simple and to the point, “Don’t shoot anything you don’t want to eat. You’re being entrusted with something, show respect.” He was there that fall when I shot my first deer.

He helped me track it and after we found it, he stared at it, kind of thoughtful for a bit. My dad was never much for expressing feelings, but I well understood those thoughts when he walked over and shook my hand and said, “Good shot. I’m proud of you son.” I became a man that day, a hunter. I still have that old 30-30, it’s a part of who I am, I’m a hunter, and I’m not ashamed to say it.”

Farming is like that. Other people have jobs, they go to work. Farming isn’t about a job as much as it’s about who we are. And our identity isn’t only defined by the way we dress, or the vehicles we drive. There’s a set of values that go along with our lifestyle: honesty, the importance of family, work ethic, putting into the community, paying what’s owed, others first. It’s not all about the money, there are some things more important than even that. It’s a good feeling to go to bed at night and know that someone’s quality of life has been improved because of what you did today.

I found a kindred spirit in Todd Slykhuis, a past winner of the Illinois Beef Association Commercial Producer of the Year award. Todd uses Byron Seed forage products in his pastures and hayfields. I drove out to his farm because I wanted to know what part a high quality forage diet played in his formula for success. Todd’s cow-calf operation was started in 1972 and has grown to about 400 brood cows with 75 to 100 replacement heifers. He recently added a 299 head finishing barn and finishes his calves indoors. We were looking at a pasture with Angus and SimAngus crosses grazing when I asked him about the future of beef in Illinois. He waved his arm around in frustration and said, “Guys around here are tearing out the fences and selling off their cattle. They think they’d better off somehow with a corn/bean rotation just because it’s easier.” There was some real passion that came through that statement, “Wow,” I thought, “I like this guy. He’s one of us.” That’s the other part of why we farm, we’re driven by passion, we feel strongly about the things we do, the things we stand for. “You know,” he said, “ This country would be a lot better off if part of our teens’ required education was helping with the haying in their local farming community.

Kind of like a boot camp, teaching them self-respect and worth.” “Here,” I thought, “is a guy that cares about the future of our community, he’s worth listening to.” When I asked him the size of his operation, he said “Well, we just finished AI breeding 442 cows, counting the yearlings. We’re running them, their calves, and the replacements on 350 acres, so yeah, I’m plenty crowded. I have to maximize forage that I get off the pastures.” Todd also raises the corn for his beef finishing operation.

The calves are born in January/February and the plan is to have them shipped by the time the momma cow calves next January. “We’re pretty much a self-contained operation. I feed them corn and haylage off the farm. Our aim is to have them finish out around 1300 at 12 months.” When asked about what is key to his success as a beef producer he said that good genetics are important, genetics and good management. The good genetics help him reach his 1300-1400 pound goal and good management keeps his brood cows in top shape. “My biggest thing is trying to keep condition on the mamas. Our pastures are a mixture of Drover and BarOptima tall fescues from Byron Seeds. Fescue works really well for us. We are getting more tonnage and higher quality out our improved fescue than we would out of alfalfa. Crude protein is around 24% with a TDN of more than 70% and an RFQ of about 170.

Durability is another thing. I need something that I can run cows on that will hold up. I want something that will last a long time. Ernie, (that’s Ernest Weaver, Byron’s Southwest Territory Manager), Ernie said that I’d get 10 years out my fescue pasture, just like he did.” We took a walk through a 5–6 year old fescue pasture. It was lush and well filled in. “Down here in Southern Illinois, it’s hard to keep cool season grasses in a hayfield or pasture without proper management. I pull the cows off the grass about the first of August and feed them haylage and let them browse on crop residue until the fall rains kick in. I’ll stock pile fescue in some of the pastures until about Thanksgiving. Then I’ll graze it into the new year. This helps me keep top condition on the mamma cows.” This is where Byron Seeds can really help the producer. Byron Seeds was started 20 years ago by farmers who were looking for better forage to improve animal output.

Through the years, we’ve not only developed into a research company, searching the world over for the best high quality forages to test in the Midwest, but we’ve developed management techniques along the way that improve the condition of the soil as well as the livestock. Like Todd said, it’s all about genetics and management. Byron selects the best genetics in forages and then couples these high energy forages with an education program in management for the producer. Samuel Fisher, the principle owner of Byron Seeds says, “We’re an education based company. It’s important for us to show the producer how to get the most out of his forage and, at the same time, building soil and protecting the environment.

As farmers, we’re stewards of the things entrusted to us. We want to be able to hand this soil and this farm, in fact, this community to the next generation a bit better than the way we found it. It is possible to increase quality and yield in forage and at the same time build soil.” We are confident about our products and our management practices and we back them up with replants on our sorghum and Sudan products, on our cool season perennial grasses and alfalfas as well as our corn.

Byron Seeds is really education minded. We work closely with some of the top universities in the US, with on-site testing and research in ten states to see what works best in your area. We hold seminars throughout the Midwest for producers, inviting some of the best known university and industry people to speak to the producers about the latest in farm management practices and forage varieties.

As well, Byron publishes their own Resource Guides four times a year full of management tips for farmers. The early spring issue reviews all the alfalfa, clover and grasses. The late spring issue addresses summer annuals such as BMR gene 6 forage sorghums and Sudangrasses. We publish a hybrid and planting guide on corn in time for prepay season and another book on cover crops book as well. This gives our customers the opportunity to have a new information resource for every season.

We also publish a year-end report that covers all our research and plot testing for the year. You can request a resource guide by calling 1-800-801-3596. (By the way, that’s also the number of our tech support line.) I tell folks that we have these tech support people that have nothing to do all day but sit around with their feet on the desk, drinking coffee and waiting for the phone to ring. They’re glad to answer any questions about crops, soil, varieties, management, you name it. In reality though, when you call, you’re going to find them on the seat of a tractor, or pumping a lagoon, or feeding livestock, because our tech support people are farmers and a desk is one piece of farm machinery none of them has really mastered yet.

Ernest has worked closely with Todd to make sure that Todd is getting everything out his forage. “Ernie’s a pretty good guy. He said throw a ten square foot frame out into the pasture. If you can find a square foot of bare soil inside that framework, you’re losing 10% of your fields efficiency to produce beef. It’s tight on my farm with the overstocking that I carry on my pastures so I can’t afford to have only 15 acres producing grass in a 20 acre field.” Todd follows a careful fertilizer management plan for both his hay fields and pasture. “I put 40 units of actual N on in the spring and then again after every cutting. And I make sure that I cut the stand at least 3 inches high because the reserve for the regrowth is in the crown, or the lower 3 inches of the stem.” Todd wraps the haylage at about 60%-65% moisture. “It’s just a whole lot easier wrapping hay than trying to dry it, and I get a lot better quality too.”

Todd has worked hard to be to be considered Illinois top Beef Producer of the year and a nominee for the 2012 Beef improvement Federation. We congratulate him and his family and are pleased that he has included Byron Seeds in his formula for success.  We’d like to see more success stories like Todd Slykhuis. Byron Seeds has about 300 dealers throughout the Midwest and six Territory Managers like Ernest. Many are farmers themselves with years of experience and a lot of local knowledge as to what works in your area. Our Territory Managers are well respected animal nutritionists and agronomists, with degrees in Animal Science, Dairy Science, and Agricultural Engineering. All of their contact information is listed in the back of the Resource Guides.

Give us a call. There’s a good chance one of us might be your neighbor.