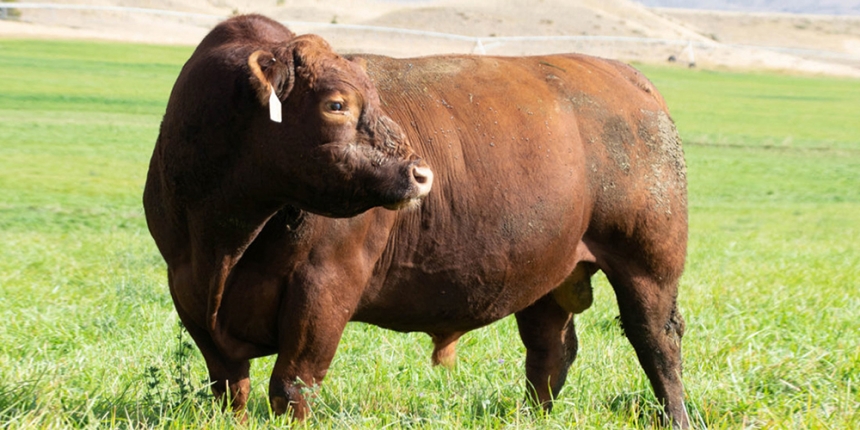 A breeder’s job is to supply superior genetics to commercial cattlemen, and this is usually facilitated through bull sales, production sales, semen sales, etc.  This seedstock breeder takes this job very seriously.

Kit Pharo (Cheyenne Wells, Colorado) has been selling bulls for 30 years.  In addition to genetics, his family operation provides a total program and a way of thinking focused on helping cow-calf producers make their business as profitable, enjoyable and sustainable as possible.

Kit started as a commercial producer in the 1980’s and could see that the industry was headed in the wrong direction.  “The focus was on bigger weaning weights, making cattle bigger as fast as possible.  I was fortunate to have a father who was still around, and some friends, who said this didn’t make sense.  We can always make cattle big, but if they are not profitable, it doesn’t really matter.  I had enough experience in my 5 years of buying bulls and trying to do what everybody else was doing, to realize we were not making any money,” he says. 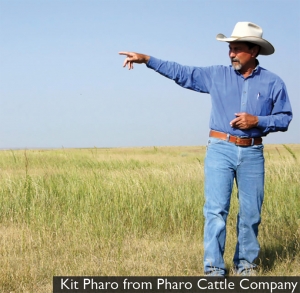 “I looked at ranchers who’d been weighing their calves at weaning for many years, and could see their cow size had increased 200 or 300 pounds.  When we’re feeding bigger cows and not producing that much bigger calf, it’s not profitable. Our focus, instead of increasing pounds per cow (weaning weight), has been on increasing pounds per acre.  When you look at bull catalogs and AI catalogs, everything is still focused on more growth.”  But after a certain point the increased cow size no longer increases weaning weight.

It’s better to focus on pounds per acre rather than pounds per cow.  “We came to the conclusion that stocking rate affects profitability (or lack thereof) more than anything else.  So if we can run a higher number of smaller cows that wean a higher percentage of their own body weight, we can drastically increase pounds per acre—and those smaller calves bring more money per pound.  So we are producing more pounds per acre that are worth more per pound,” he explains.

“Our focus is to try to help our customers’ business be as profitable and enjoyable and sustainable as possible—with subsequent generations coming into the business.  We have focused on low-input, grass-efficient cattle that can make the most money (for the least cost) on grass.  They still work well in a feedlot and finish in fewer days with less feed because they are efficient,” Kit says.

“Our first bull sale was 30 years ago and we sold 6 bulls.  As time went on, more and more people understand what we are doing.  We are now selling more than 1000 bulls a year, in 6 different sales in 5 different states.  We don’t like regular auctions that are fast-paced and the auctioneer is hard to understand with bid-takers screaming in your face.  We started a Cowboy Auction; low-key, low-tech, laid back, and you can look around and see who is bidding against you.  We actually sell bulls faster this way than with an auctioneer, and everyone is comfortable,” Kit says.

His herd calves in May-June, in sync with Nature. “Back in the mid-1990’s we stopped developing bulls on grain because it didn’t make sense.  Most cow herds are not in a feedlot; they are out on grass.  So we started developing bulls on grass.  What we had to do then was have a fall bull sale instead of a spring bull sale.  A person can’t sell those bulls as yearlings, especially if they are developed slowly on grass.”

By fall they are 18 months old.  By the time they breed cows they are 2 years old.  Because they are developed slowly and are older, they have very few problems and can breed more cows.  “We’re not afraid to turn them out with 40 or more females their first time, and maybe 50 to 60 after that.”   This past summer he had two groups of 80 females, with one bull each.

He has come up with several tools to help ranchers select the right bulls for their program, including a Quick Sort method that anyone can do on their computer.  This is a link they click on, for any upcoming bull sale, which lists all the bulls, their breed, sire, frame size, and ranking (in a 1 to 5 rating) for 14 different traits: disposition, fleshing ability, calving ease, thickness, muscling, masculinity, grass efficiency, hair coat, fly resistance, dam’s udder score, age of dam, marbling ratio and tenderness, and an overall rating.

For instance one bull might be a medium in frame size, a 4 in disposition, a 5 in calving ease, a 4 in fleshing ability, a 3+ in fly resistance, etc.  A person can decide which traits are most important to their own operation and select bulls that are high ranking in those traits.  One rancher might be most interested in calving ease, and some of the other traits don’t have to be a top score.  All bulls in that sale can be compared in the various traits.  There are also video clips for each bull, so they can be viewed.

For people who can’t attend the sale, a base price is listed for each bull, and they can bid something above that price for any bull they are interested in (whatever price they are willing to pay), and the number of bulls they want, and hopefully end up with some of their top picks.  It’s an easy way to evaluate bulls in terms of the traits they feel are most important for their own herd.

“Not every ranch is the same; each operation is looking for something a little different, and they all have a different budget.  Our Quick Sort program is unique and can help our customers select the bulls they need.  Some outfits know how to select for EPDs with bigger weaning weights, milk, yearling weights, etc. but this is not what they need to do.  They need to select for low maintenance animals instead of high growth animals if they want to increase pounds per acre instead of pounds per cow,” he says.

“We used to let people sort for EPDs but I realized it was just giving them a tool to go the wrong direction.  So we provide scores on our bulls, for calving ease, muscling, low maintenance, etc.--all the things we think are more important than bigger and bigger,” he says.

Pharo Cattle Company is a family operation; Kit and Deanna’s son Tyson is an integral part of the ranch and breeding program.  Over the years, they have expanded from one family to several families.  Pharo Cattle Company has cooperative herds in 12 different states and develop bulls on grass in Colorado, Missouri, Texas, Nebraska and Alabama.  Next year, they will be developing bulls on grass in Montana.   The bulls are sold in the states they were developed in.