PastureMap: Take the Guesswork Out of Grazing 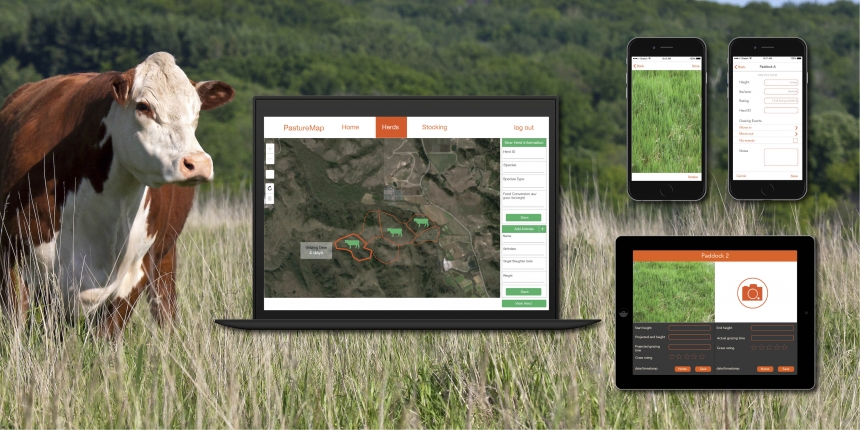 When to move? How many head? How long? How much? These are questions that cattle ranchers often ask themselves as they put together their grazing rotation plans. Until now, the answers have come through trial and error and from years of experience. PastureMap, a simple-to-use application developed together by a group of ranchers and Stanford graduates at Summer Technologies in Palo Alto, California, takes much of the guesswork out of the grazing process.

Founded by Christine Su, a recent graduate in land use and agriculture, Summer Technologies is helping cattle producers by bringing better data monitoring to grazing management. Known as PastureMap (www.pasturemap.com), this cutting edge technology makes sustainable grazing practices easy for cattle ranchers. It is a program that works on smartphones and iPads to help cattle producers take geotagged photos and record grass conditions in the field, improving the accuracy of ranchers’ visual assessments of their land. PastureMap stores the data and GPS location of the photos taken outdoors, even without cell service. When ranchers get home, the program automatically syncs up with the Internet so that they can view a map of all the records and photos they took on their desktop computer without typing in the data manually.

PastureMap also allows producers to input herds and animal weights to calculate feed requirements, and shows available grazing days for each herd in each field. This helps producers stay on top of their available forage, and make solid decisions on where and how long to graze their herds.

Christine says, “We’re all about helping ranchers save time, make the most out of their forage, and raise productivity while growing healthy grass and soil.” Traditionally, grazing record keeping meant volumes of paper to keep track of all of the paddocks and herd moves, to draw their own maps and then to put together a grazing record. It was time consuming and also difficult to update as things happened in the pasture. Because producers spend most of their time out in the field, putting detailed records together on paper is difficult to do.

Kevin Watt, Integrated Land & Livestock Manager at the TomKat Ranch Educational Foundation and one of the producers who has advised the development of the technology since the beginning, says, “Having PastureMap to help budget out the remaining stockpile of grass is a huge economic advantage. If say you are in a drought and you know that in June, you could go to the auction and sell at far higher prices before anyone else rushes out. It also saves the quality of your cattle because you’re not dealing with selling off animals after that crisis has happened. It’s a huge benefit to know and be in connection with how much forage that you have at a given time.”

So, you’re not a computer whiz. Is PastureMap difficult to use? According to Christine, the answer is no. “The ranchers we work with are always busy, so we made it simple to enter data using as few taps on the screen as possible.” In a previous career, Christine built software tools to help manufacturing supervisors and workers track their production efficiency, where she learned the value of simplicity in management. She says, “A tool that tracks three things that you look at every day is more valuable than something with bells and whistles that never gets used.”

Several ranchers shared their thoughts about the ease of using PastureMap.

Mike Giannini, another rancher who advised Christine and whose family has been ranching in California for generations, notes, “You need it to be simple and this is as simple as it gets. You hit it dead on the money. If you want us to use data, that’s how we’re going to do it.”

Erik and Doniga Markegard, of Markegard Family Grass-Fed LLC, San Gregorio, California, reflect their thoughts, “Since we started using PastureMap as a tool for planning and monitoring our grazing it has increased time efficiency. It has allowed us to easily record observations, paddock size, locations and photo points in the field without the need for lengthy time back in the office entering in data. It is a very easy to use app that allows us to see the big picture of our rangeland.”

Kevin Watt adds, “To watch my team use PastureMap and be excited about how quickly they can log the information and so clearly tell their story, which they are proud of, just made me so happy. That’s so many saved hours that I don’t have to be lecturing people or doing that work all by myself.”

According to Christine, things have gone quickly since she began working on PastureMap in June 2014. Su spent a lot of time talking with over 600 farmers and ranchers, asking them what they would like in an app like this. From these discussions, she built the features the producers said they most wanted. “Out in the field there is no Internet access, so they wanted something that they could use to take photos and then bring it back to the barn or ranch. Ranchers also wanted to quickly estimate the size and perimeter of a new paddock, to how much fencing to bring out.”

PastureMap has paying customers and 30+ ranch partners in five states. Christine has worked on farms and ranches in four continents, and believes American ranchers can be the best in the world. “The relationship ranchers have with the land is such an important part of our national history and heritage. My dream is to contribute technology to help sustain the farmers that have enriched our communities and our landscapes for generations.”

Expansion is also swiftly coming as the word gets out about PastureMap. “We have been approached by a collective of New Zealand native tribes asking to pilot PastureMap on their families’ ancestral lands, which are now pasture-based sheep and beef operations that they want to keep on the land for hundreds of years to come.”

Evolving With the Ranching Community

Although Christine did not come from a farming background, food was always a central part of how her Chinese-American family expressed care for each other. She grew up having weekly Sunday lunches with her grandfather, who was a man of few words, but always made sure her plate was heaping full. She struggled with food allergies, which made her even more conscious about her food, where it came from, and who grew it. Later, she left her job building operations systems for a finance firm to apply those skills to “the people I respected the most — farmers who grow the food that nourishes me and my loved ones.”

She applied for an MS in land use and agriculture from the Stanford School of Earth Sciences and an MBA from the Stanford Graduate School of Business. “My essay was all about innovations that create operational efficiencies for small and medium agricultural producers. They’re often the most innovative farms and if we want the a vibrant food system, we have to help them succeed.” But first, she rolled up her sleeves and learned to move and milk cows on a family dairy in Japan.

Christine sees her business, Summer Technologies, as an ongoing and evolving collaboration with ranchers, who have welcomed her with open arms into their community. “I was so nervous going to my first grazing conference in Missouri, this Asian girl in a sea of cowboy hats and boots. I wanted to learn more from the men and women who do this every day, they’re my heroes. I guess I stuck out in a good way. Everyone was so friendly, and by the end of the conference I had a long list of requests from ranchers of software to build. We talked to everyone and started at the top of that list, and we’re still working down it!”

Christine’s got her boots now, and drives out regularly to the ranches around California. “I’m happy to go clear thistle or share grazing research with my friends. It’s not just about starting a business, it’s about building a community that takes us from the sharing at the local coffee shop to to sharing insights that can help the whole industry using technology.”

Sustainability and the Next Generation

Christine has big dreams for the future of technology in ranching to help the next generation. “There’s so much knowledge from individual ranchers on what works on their soils, their landscapes, knowledge collected over a lifetime or even multiple lifetimes. That knowledge belongs to the ranchers, and they should always be the ones who own their data and decide how to use it. But they should have the ability to pass down that experience and share what they’ve done with anyone they’re trying to convince, using real data as evidence. One rancher told me that if people were really telling their story with good data, showing off their management, it would drive tremendous value for the entire ranching industry.” Ranchers have been asking to use PastureMap data to show how they’re improving the land, to maybe get grazing leases, better financing, and reduce the burden of reporting and paperwork to agencies, Su says.

Mike Giannini reflects, “The crazy part for us is how easy this is for the new guys. The training ability of this, that’s huge, especially for the guys when they are just starting for us. Now they actually have a picture and they can be like ‘oh cool, I understand.’ Or I can say ‘make the grass look like this when you move the cows in or out.’ I know a lot of old timers with notebooks, crazy stacks of them. But it’s the new generation coming up. Something like PastureMap where you can hand that to a kid to teach them — it’s huge. I really like that side-by-side comparison of the grass photos — that’s so killer. I think that is kind of the future of ranching. It’s that simple.”

When Christine first showed Mike’s younger ranch hands the iPad app, one of them exclaimed, “Why haven’t we been using this the whole time?” Mike said, “Because they hadn’t built it yet, they’re building it now,” and the younger guy said, “Hurry up!”

Producers can download and try the PastureMap iPad app for no cost, and join the full membership that includes desktop and iPhone for a fee. “Producers like the size of a smartphone to clip to their belt. And they want to do the planning back in the office when they have a chance to sit down. By the end of the year, they will also be able to download the program on an Android phone,” says Christine.

Christine thinks sustainability is all about getting balances right. “Ranching is all about balancing the economics of making a living, knowing what the land can produce, putting nutrients back in the soil, providing what the animals need, all in an ecosystem that works together year after year. We add data to the picture, but nobody knows how to put it in practice better than the ranchers I’ve met!”

More information is available at www.pasturemap.com.