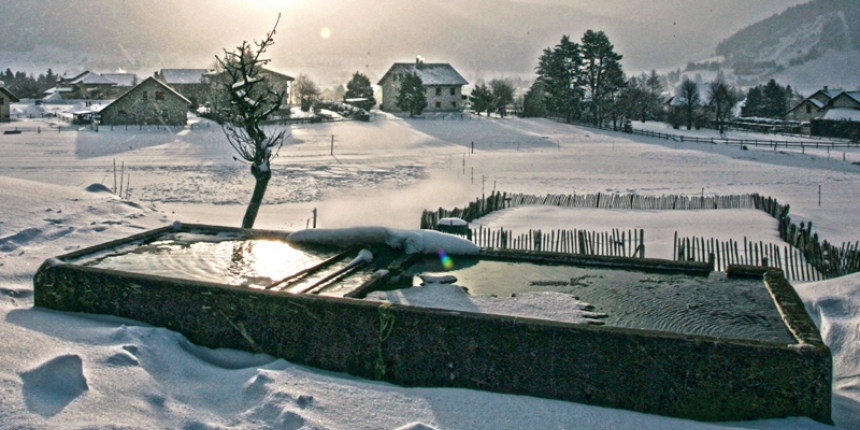 Every winter cattle producers across the Snowbelt face the challenges of the harsh conditions that the winter season brings. It’s tough on both the cattle and the producers who work diligently to keep their herd in the best condition possible. As below-freezing temperatures set in, animals need additional feed and water to replenish the energy they expend to keep warm. In this food/water equation, it is their water consumption that helps keep everything in balance.
However, maintaining a steady supply of water becomes a serious challenge as the temperatures drop. Over the years, producers have experimented with various solutions to this problem, many of which have been costly, time consuming or physically demanding. Repeatedly breaking up iced-over watering tanks is certainly time consuming and physically demanding. So as producers look for solutions to keep the water flowing, the question remains: “What is the best way to maintain a consistent water source for the cattle in winter?”

RMB25 Ice Bull
Enter Control Devices, LLC (www.cdivalve.com), a leading designer and manufacturer of engineered flow control solutions. Headquartered in Fenton, Missouri, Control Devices offers a quick and easy solution to this problem: the RMB25 Ice Bull, an automatic ice prevention system for livestock watering tanks. Simply put, the Ice Bull is a temperature-activated valve, which is semi-submerged in the watering tank and opens when the water temperature drops to 42ºF. The open valve allows warmer water to flow into the tank, creating movement on the surface and warming the tank. It automatically closes once the water temperature rises above 42ºF. The Ice Bull has been successfully tested at temperatures as low as -30 degrees Fahrenheit. Even better, the Ice Bull does not require a power source!
Travis Folkerts, a product engineer with Control Devices for the past 5½ years, designed the Ice Bull. Because he understood the headaches that freezing water tanks in wintertime cause for cattle producers, Folkerts wanted to design a valve that would be completely automatic. After extensive testing, Folkerts was satisfied with its reliability and in the fall of 2012 Control Devices brought the valve on the market.
According to Folkerts, “Ice Bull requires no manual operation; it works on its own. When working, it is designed to use .2 gallons of water per minute, which is minimal water usage.” The system is also designed so that producers can route the water anywhere in the tank.
In the event of a malfunction, the valve is designed to default to the open position, ensuring continued water flow to the tank. In that way, producers are assured that access to water will remain open.
The Ice Bull can be purchased by itself or as a complete kit. It is designed to attach to a standard float valve and can be adapted to fit most existing tank designs. “Producers can install the Ice Bull themselves. It is as simple as installing a float valve,” notes Folkerts.
According to Jim Norris, Vice President of Sales and Marketing for the past six years, sales of the Ice Bull continue to increase each year. “As producers try the valve and find that it successfully keeps their water tanks open under freezing conditions, sales continue to increase.”
Brad McCormick, Sales Manager for Johnson Concrete Products (www.johnsonconcreteproducts.com) located in Hastings, NE, believes in the quality of Control Devices products. “At Johnson Concrete, we sell a wide range of livestock waterers and have satisfied customers all over the country. We also supply all types of repair and replacement waterer parts, such as brass valves, floats, constant flow valves, heating elements, and any other waterer parts that need to be replaced.”
As a result, McCormick says Johnson Concrete does a lot of business with Control Devices, including the Ice Bull. “Conserving water is a big issue, and the Ice Bull not only helps keep waterers open in the winter but also does a good job of conserving water at the same time. Customers that have gone to the Ice Bull have found that the valve performs very well for them. At the same time, we have found that Control Devices stands behind all of their products.”

About Control Devices
Now in its 50th year, Joseph Krechel started Control Devices, LLC in a garage in St. Louis, MO. Control Devices began its early history as an innovative designer and manufacturer of check valves and controls for air compressor OEMs. The company remained solely in the control of the Krechel family for nearly 45 years.
Through a series of successful acquisitions (Hunter-Fritz in 2008, Robert Manufacturing Company in 2010, Drain-All® in 2011, and KeepFlo™ in 2012), today Control Devices is known throughout the industry as a product innovator and problem solving design partner to industry-leading customers. The company now offers products and components for pressure washers, air compressors, fire suppression systems, vehicle systems, specialty gas applications, refrigeration and air conditioning, and the agricultural and food & beverage industries. Specific products include a wide variety of specialty valves, nozzles, condensate traps, and refrigeration distributors.
Norris, who has actually been with Control Devices since 1996, believes that the strength of the company lies in the belief that “we are there for our customers, trying to solve their problems and to make things easier. Our products are sold throughout North America from Alberta, Canada to Texas.”
Today, Control Devices is a financially strong and growing business and on the cutting edge of innovation. Following a January 2012 move into a new consolidated headquarters and manufacturing facility, Control Devices was acquired by Minneapolis-based Goldner Hawn Johnson & Morrison (www.ghjm.com) in August 2013 and is strongly positioned to support continued growth and success.

Beef Up Farm Safety Integrate Safety in Your Cattle Operation

When raising livestock, even the gentlest cows...