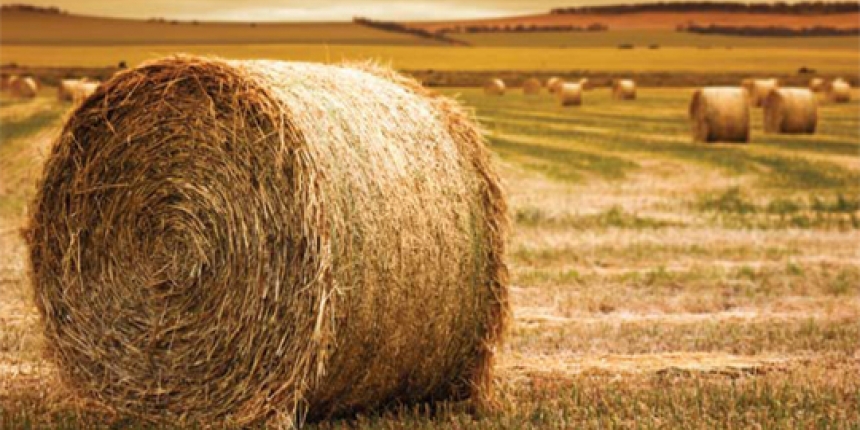 At just under 119 million tons, the 2011 U.S. hay crop is forecast by USDA to be the shortest since the drought year of 1988.  Yields are down from 2010, but by less than 6%; it's kind of like the man with one foot in boiling water and the other in a bucket of ice - while the Southeast Plains crop has been devastated by what Texas State Climatologist John Nielsen-Gammon calls the "most severe one-year drought on record," there's a lot of hay in places where it's typically harder to grow.  The problem is getting it where it's needed.

In Texas, more than 95% of which was in the National Weather Service's “hardest” drought rating of exceptional as of September, the grass simply did not grow.  It isn't just dry; it's hot.  The average June-August temperature of 86.8 degrees - that's a 24 hour average, day and night - was the highest ever, exceeding that of the Dust Bowl year of 1934.  Along with crops, pasture and rangeland have been seared by the heat  and lack of water; as of August, Texas AgriLife Extension estimated this year's drought-related agricultural losses at a record $5.2 billion,  with $750 million of that coming out of the hay crop.  As a point of reference, according to USDA, last year's Texas hay crop was worth $1.241 billion.

But in Texas, there's little standing for the cattle.  “There's actually not a lot of forage left at all,” says Vanessa Corriher, a forage Extension specialist at the Texas Agri Life research station at Overton.  “There have been some producers that didn't take a lot of cutting or they sold cattle earlier, so they still have some bermudagrass still standing.  Most producers had, kind of until the last minute, grazed and used what they had to, so there's still bermudagrass up there; it's just very short.  A lot of it has already gone dormant because of the drought, and has potentially suffered from the drought.  Most producers have been at the point for a while now where they're feeding hay or other forms of supplementation to keep their livestock going.”

Corriher says there's still some hay, and alternative forage sources like sorghum stubble or corn stalks, although the majority of it is probably being imported from other states.  That can get expensive, and she says it's up to the individual producer whether to make that investment, or to just give up and liquidate herds because it's no longer economical to maintain them.  “They have to make the best choice for their situation, their production goals and what they're trying to achieve,” she says.  “But there are a lot of producers in the state of Texas that are maintaining their herds; they're just having to work very hard at it.”

Corriher has heard prices even higher than those quoted by USDA; where bermudagrass hay is available, it's bringing $150 a roll.  The corn stalks and other crop stubble are only $30 a roll.  “As we start to look into the winter, and we're still in a drought and there's not a lot of rainfall, unfortunately those prices are going to increase” along with demand, she says.

While some Texas forage producers irrigate, that is expensive and is not a panacea.  “Even in a dry year with irrigation, they still only have 50% of their production,” Corriher says, and adds that irrigated producers aren't trying to make a killing.  “I know a hay producer that is irrigating 24/7; he's selling his hay, but he's trying to keep it at a reasonable cost because he understands the stress producers are under, so he's probably lucky if he's breaking even in regard of the cost to what he's selling his hay for.  So even for those guys irrigating, it's still a rough year.”

Hay and forage prices are not just high in Texas.  The same week of Sept. 9, the USDA Market News reporter in Torrington, Wyo. said the best quality new crop alfalfa was selling for $180-205/ton in eastern Wyoming, up from $100-120 the year before.  But Donn Randall of the Wyoming Business Council says there's no forage shortage there.  “Parts of Wyoming, up in northeast Wyoming, probably have had a record rainfall, so it's just the reverse.  We've got more forage than we normally get.  The forage supply is good, and quality is really excellent, so our hay producers are doing well.”

So why are the prices so much higher?  Randall cites increased out-of-state demand, both from southwestern areas stricken by the drought and from overseas.  “The exports out of the Pacific Northwest have increased this year by about 11%,” he says.  “Those export companies are starting to move out of California, Idaho and Nevada, and have started sourcing hay in southwest Wyoming.”

They've also found a way to reduce the price of shipping hay to the South.  Randall says because of the new Niobrara oil field in northern Colorado-southeast Wyoming, and the Bakken in North Dakota, there are a lot of flatbed trucks hauling oil field equipment up into that part of the country.  “They're willing to give some real discounts to people to haul hay back to Texas and the Southwest, just to get their fuel paid for,” he says.  “One day this summer, I had a meeting in Thermopolis in north central Wyoming; I left Cheyenne at 4 o'clock and got there just at dark, and I counted 23 semi-loads of Wyoming hay heading south.”

Randall says about 90% of the first cutting of hay in central Wyoming this year was already spoken for before it was put up.  Brokers had actually descended on the region in early spring—remember, Texas' drought started in 2010—but growers were reluctant to forward contract.  “I was at a county fair in Fremont County,” he relates.  “One of the young men that I was talking with was actually taking a long, flat truck, filling it with hay, hauling it to the Southwest and then hauling cattle back in it to put on pasture, and to run for the summer.”

Another story speaks to the desperation of Southern Plains cattlemen under these conditions; Randall, who is the contact for a board run by the Wyoming Extension Service that matches hay buyers and sellers, says he talked to a Texas producer who had 400 head of mother cows.  “They raised show club calves,” he says, “and they wanted to bring those to Wyoming to run them over the summer and winter and then calve them out, and whoever took them could just keep the calves.  That's how badly this producer in Texas didn't want to lose his breeding and his genetics...So they're just scrambling, trying to do something to keep their operations together down there.”

In the Midwest, the outlook is mixed.  Iowa State University professor of agronomy Steve Barnhart calls forage supplies adequate in general, but somewhat spotty.  “The rain delayed some of the harvesting for first cutting,” something that happens frequently in Iowa, he says.  While dairy producers cut early to make the first cutting into silage, “the beef and cash hay market people who are attempting to get high quality sometimes were forced to harvest their first cutting a little later, so there’s some low quality or medium-to-low quality first cutting out there.”  But the second and third cuttings, he says, were “pretty decent, actually, in quality and quantity,” with the exceptions of southern parts of the state where harvests were a little short due to dryness.

Barnhart says some cash hay has already moved out of state, primarily to the South, but some local sellers are sitting on stocks, hoping the price will rise.  He doubted much of the crop residue Texas is reportedly getting is coming from Iowa.  “Even decent grass hay in round bales are a challenge to move” due to the transportation cost, he says, and the relatively low feed and cash value of corn stalks make their movement uneconomical.

He says the high corn price this year had an indirect effect on hay and forage prices; it caused marginal land to stay in corn that ordinarily would have been rotated to hay.  “That does chip away at the overall production,” he says, “but generally the hay does not compete as directly with corn and soybeans from a feeding and use standpoint.”  Instead, hay prices generally reflect shortages and availability in surrounding areas.  “There’s a net pull to the South for all of the Midwest hay,” he says, “so that the price has been ratcheting up proportionately as supplies in the market pipeline diminish.”

Thirty years ago, a custom harvester was inspired...

U.S. CUSTOM HARVESTERS HERE FOR YOU

In the cattle and crop industries, the one...