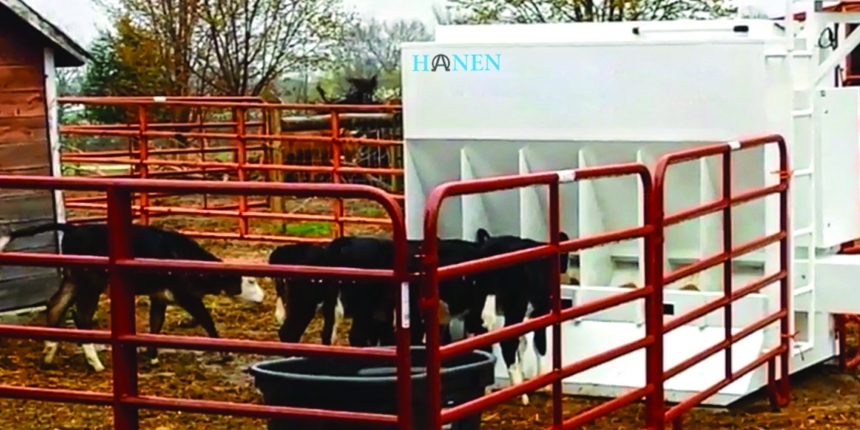 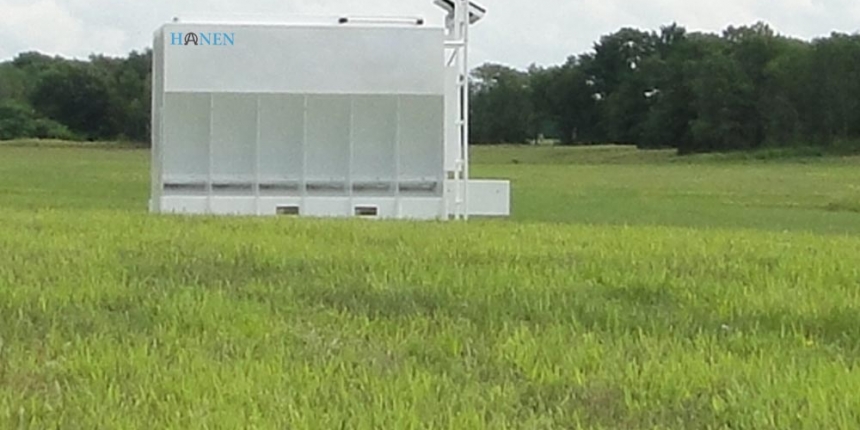 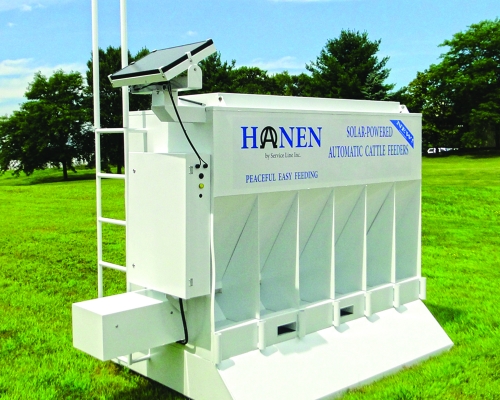 The Hanen Feeder is the latest in a long line of ideas from the efficient mind of Dave Barney. Owner/President of Renegade Parts Washers, Barney, a native of Michigan’s Upper Peninsula who currently lives in Southern-Central Wisconsin, became involved in livestock farming mostly as a hobby in the past 18 months, but it didn’t take long for him to begin analyzing and looking for ways to make the daily chores easier and more efficient. That’s what he does.
“I think it’s in my DNA,” said Barney in a recent interview. “I can’t work without looking for an easier way. “That ambition and drive played a big part in Barney’s business life as he advanced from the parts-washer version of a door-to-door salesman into a top end parts washer business that employs about 20.A quick look at the history of Barney’s primary company — Renegade Parts Washers — shows an aggressive approach that has seen the company build from construction of polyethylene manual parts washers used primarily in small auto shops into the automatic parts washer field advancing from small 40-gallon tanks and now massive 1000 gallon plus machines with various cycles all run by computers.
Naturally, when he became interested in raising cattle in recent years, Barney looked for ways to save time and provide a more efficient process. Unlike many in the field who are born into the farming or livestock production lifestyle, Barney relied on the internet and picked the brains of his new friends and colleagues to learn the ropes.“I didn’t have any type of a farmer’s or livestock producer’s background, so I didn’t have Dad or Grandpa saying, this is the way,” said Barney. “So, the only thing I could really do is, I talked to a few people. I talked to a few nutritionists really in the know about feed and feeding because, if you’re going to buy some cattle, obviously they need to eat. So, my thought was, I want to learn, I want to do it right. This is food for my family and my neighbors. I’m not going to mess with it. We want to do it right.
“One thing I learned was, if you can feed your cattle four, five, six times a day, keep them coming back to the feeder (that’s the best). Everybody has told me, 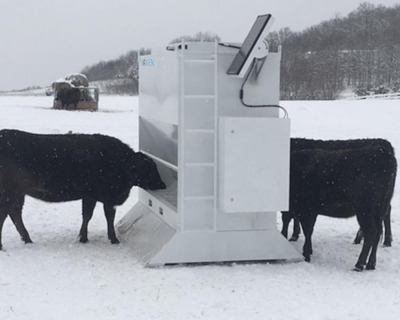 everything I’ve read. Not only can you move up on the grading scale, your animals are more docile, and the meat more tender. And (with this feeder), you can use less feed and get the same output. So that’s a nutritional program that farmer’s need to be aware of.”That’s an ambitious feeding schedule which is difficult for the average farmer and impossible for those like Barney who run a full time business ahead of raising cattle. He wanted to come up with a system that would make it possible for his cattle to get the nutritional grains in small quantities several times a day.
So, Barney went to work on creating his Hanen feeder, taking advantage of his parts washer business that employs an engineer along with a staff of expert welders, builders and electricians.
Barney and his engineer, Gary Reuter considered every angle when designing the Hanen TS-10 feeder including ease of use, impact on the environment, high quality material and options to allow it to be used for different livestock.
The TS-10 is a two-sided feeder with the option of a simple trough on both sides or dividers that lessen competition and bullying. When the animal’s head is in the trough the dividers affect its vision so it is focused only on the grain in its own area.
They also designed portable calf guards — bars that will create an area only a calf or smaller animal can fit into.For many, the feeder will be in the middle of a field or pasture, 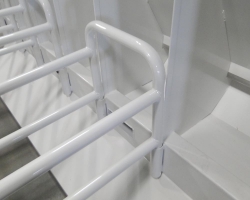 far from an electrical source. However, with a solar powered energy source and a deep cycle battery for a power source, the farmer can rest easy knowing the feeder will function reliably even if they have to be away for a long period of time. This lessens the overall environmental footprint as well, something everyone is aware in the modern farming age.A Programmable Logic Controller (PLC) computer type allows the mechanism to be set for when and how often feed will be dropped, or it can be run manually as well. An alarm sounds at the time of drop, which at Barney’s farm brings the cows in a jog to the food source.
Barney explained the dispensing system as a precision operation with 3-inch diameter holes and a one- inch thick Delrin material sliding plate that allows the feed to fall through. Farmers can use a cup to measure how much is dispensed (it varies based what type of feed is being used) and then set the plate to slide however many times needed per use. If the farmer decides not to use all 10-feeding slots, the dispensing holes can be blocked out.
The hopper on top of the machine will hold 3000 pounds of feed which can be opened relatively easily with gas shocks. The gas shocks ease the chore of lifting the steel lid and then make sure the seal is snug and water tight.
The feeder itself is relatively lightweight and when empty can be moved with a forklift. 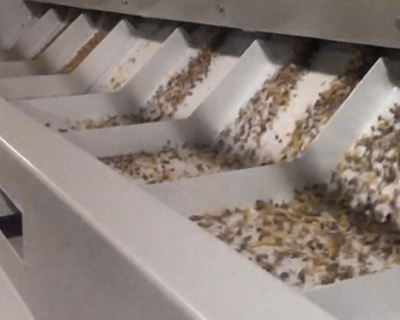 Most importantly, the system will help create and maintain a balanced diet throughout the day, guaranteeing the exact time and amount to create a calmer, more docile animal.The feeder is eight feet long and stands about nine feet tall. A ladder on the side allows easy access to the top where the farmer, with the aid of a lift for the bags of feed, could empty all he needs to fill or refill the machine – but not often. With the 3000 lbs. capacity, Barney said he uses a total of about three pounds per day per animal and the feed stays dry and ready for several weeks in the hopper.The Hanen 10-head feeder became a reality in the spring of 2016 and in recent weeks, Barney added a round 20-head feeder which occupies the same length. Instead of five stations on each side, the round construction allows the 20 side by side stations all of the way around the system.
As this is written, the prototype has just rolled off of the line and Barney hopes to test and perfect the system in the weeks ahead.Barney himself has started out his hobby farm with about 10-head of Wagyu cattle so it was only fitting the machine made its public debut at the Wisconsin Wagyu Association’s first sale held at the Waukesha Fairgrounds August, 5-6. Farmers and livestock producers interested in seeing it close up will get a chance at the World Beef Expo in Milwaukee in Sept. The company is aggressively searching out other opportunities, in the Midwest and beyond, in the months ahead to give everyone a chance to see the Hanen Feeding system.
For more information, contact David Barney, President and CEO, Service Line, Inc., 800-774-7900, dbarney@renegadepartswashers .com, or visit the website at www.automaticcattlefeeder.com.