More Than a Feed: How Sprouted Grains can Lead to Cattle Business Profitability 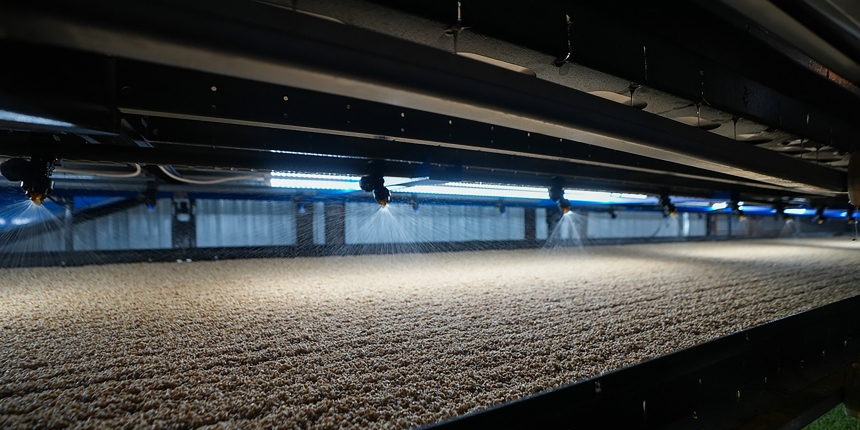 More Than a Feed: How Sprouted Grains can Lead to Cattle Business Profitability.

Having access to high-quality feed ingredients is vital to the success of any cattle business. A decade ago when rancher Dihl Grohs founded HydroGreen and developed indoor equipment to sprout small grains for his cattle, he was motivated to produce more forage on the ranch and have more control over a primary input. Today, HydroGreen’s value proposition has evolved to reflect the findings of its plant and animal research team. 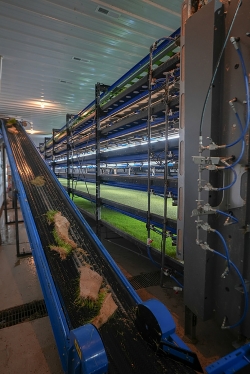 According to HydroGreen President John de Jonge, “Sprouted grain from HydroGreen equipment should really be thought of as a digestible energy ingredient, not a forage.” The early value proposition for HydroGreen was all about consistent access to quality feed on the ranch or farm, and now the value is centered on the significant improvement in feed efficiency, rumen function and animal productivity created by adding HydroGreen’s sprouted-grain feed to the ration.

“Our research indicates that when a producer incorporates sprouted grains into the ration, digestion efficiency improves,” says de Jonge. “Bringing energy to a rumen in a forage form is much less stressful than using corn, and when incorporated at key stages, such as calf development, HydroGreen sprouted grains positively impact rumen function, which in turn lowers digestive stress, can result in a thriftier calf and increase productivity of the animal for the long term.”

Because of the company’s patented equipment and proprietary research, HydroGreen has set itself apart within the sprouted-grain production industry. While HydroGreen sprouted grain is what’s sometimes called fodder, not all fodder is created equal. That’s because fodder production models that prioritize growing forage are solving for the early value proposition that motivated Dihl Grohs to build the first versions of HydroGreen’s equipment. Whereas with the HydroGreen solution today, the priority is the production of a consistent nutrient package that can lead to enhanced profitability.

So how does sprouted grain from HydroGreen equipment accomplish such strong animal productivity outcomes? Quite simply, the HydroGreen crop replaces a portion of the ration with a high-glucose, readily fermentable energy source, which promotes efficient fermentation, rumen balance, consistent eating patterns and other notable performance outcomes. “It’s about the optimization of living processes, from sprouted-grain feed production to rumination,” de Jonge explains.

Abundant Benefits
Thanks in part to the extensive research trials that HydroGreen has invested in, the team understands  the benefits of sprouted-grain feed for both dairy and beef cattle. In dairy cattle, balancing HydroGreen sprouted grains correctly in the ration leads to significant productivity outcomes, from increased milk production to increased conception rates. Likewise, preliminary results of HydroGreen’s beef trials indicate significant increases in carcass value for same days on the feed, improved average daily gain, improved feed conversion and fiber digestion, and reduction in rumen pH variation. In both dairy and beef trials, the efficiency in digestion also means more calories  are transformed into energy versus waste, such as methane. Specifically, the beef trials indicate a methane reduction of 35-45 % per head.

“With initial beef research findings indicating improved rate of gain, better yield grade – with no reduction in quality – and reduction of enteric methane, we are meeting a number of buyer demands with one ration ingredient,” says Danielle Davis, HydroGreen’s director of business development. “We’re motivated to help cattle operations use sprouted grains to improve their bottom lines through the twin pillars of production efficiency and premium price.”

The methane reduction created by feeding HydroGreen sprouted grain  is an added benefit resulting from microbial activity increases. Methane inhibitors currently available on the market either have a negative effect or no effect on animal performance. HydroGreen is unique in that it’s a solution that increases animal productivity while it also reduces methane. More efficient production alone can reduce the footprint of any operation, so the reduction in enteric methane emitted from the animals due to the content of their ration is an additional reduction.

“The enhanced productivity in the animals is what pays for the HydroGreen solution. And, the carbon reduction, a quickly evolving market, is a side bonus that may help producers access future premium programs and can aid the industry in achieving footprint or ‘sustainability’ goals,” says de Jonge. 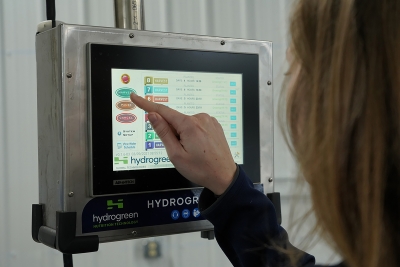 In addition to feed efficiency, HydroGreen equipment is also very water efficient. The machines require very little water to produce feed compared to the amount of water needed to farm feed on cropland. This alone results in water efficiency on the farm or ranch, but also, if a producer uses 15% HydroGreen sprouted grain, that means they can reduce an equivalent amount of irrigated ingredients in the ration. Therefore, HydroGreen sprouted grains can help ameliorate local water constraints, especially relevant in regions where water is increasingly in short supply and use for agriculture is increasingly regulated.

Strong Partnerships
HydroGreen is currently designing and installing systems for beef producers with 50 head who want to grow to 100 or 200 head, and at the same time the team is designing systems for large-scale dairy operations with five to ten thousand cattle. To help determine the best system for each ranch or farm, HydroGreen has implemented a new producer education process that takes each rancher or farmer through five key steps of learning and evaluation. These steps include 1) Application (learning about the animal research indications); 2) Infrastructure (controlled environment 101 and the nuts and bolts of the equipment); 3) Cost and Payback (spreadsheeting to arrive at each operation’s cost per ton, premium marketplace considerations, funding opportunities); 4) Supply (grain sourcing and supply based on the producer’s region); and 5) Tour, of the innovation center in Sioux Falls or a HydroGreen customer site.

In 2023, the company is working to wrap up the noted beef trial and will share more information with prospective and current customers about the full list of indications. What’s more, HydroGreen is investing additional resources into engagement with policymakers at the federal and state level. “There are economic and environmental benefits to the HydroGreen solution,” de Jonge says. “We’re dedicated to making HydroGreen a part of dairy and beef supply chains by identifying funding opportunities and creating funding programs that HydroGreen customers can benefit from.” 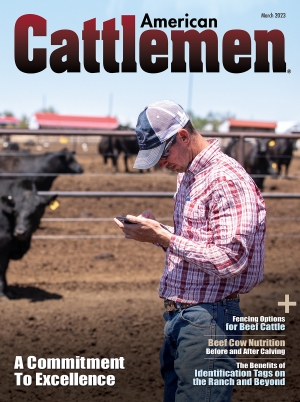