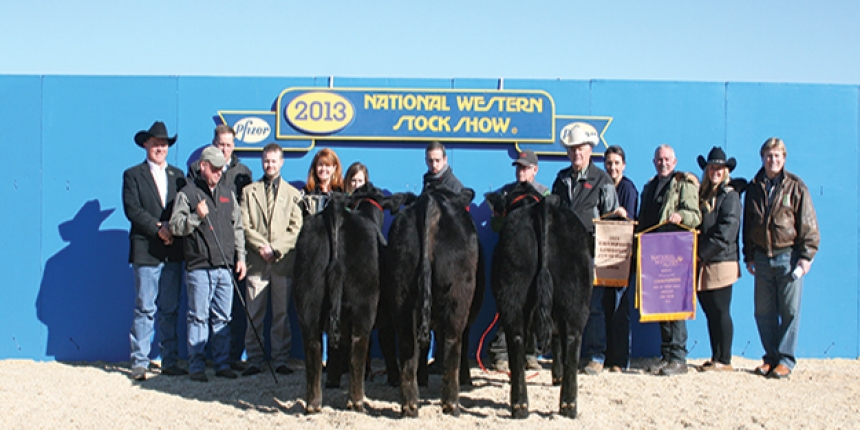 Magness Land and Cattle is a widely acclaimed Limousin ranching operation headquartered in Platteville, Co., that consistently produces Grand Champion Limousin bulls and females. Magness has long been involved in showing Limousin cattle on a national level. However, with annual bull sales of 300 head, they think of themselves as commercial bull providers that happen to show cattle on a national scale in order to promote the program and the breed.  Started by the late Bob Magness, the ongoing motto of Magness Land and Cattle is “The brand you trust…the results you expect.”

After achieving an agribusiness degree in college, son Gary Magness followed in his father’s footsteps as a cattle rancher initially raising registered Hereford cattle. However, in 1981, Magness made the decision to go with Limousin cattle and by 1987 had purchased the highly renowned McKown Limousin herd in Oklahoma, one of the leading fullblood Limousin programs in the country. The rest is history as the Magness Land and Cattle grew from being a commercial operation to that of a scientific business utilizing artificial insemination and embryo transfer technology to produce purebred cattle that fit the needs of a wide range of cattle producers.

According to Gary Magness, “Since 1985, the Magness family has been committed to the Limousin breed and its breeders. Through the years, we have been part of many changes, but not once has our passion for the Limousin business wavered. We are truly excited about the breed’s current position and are, without question, as committed today as we were back in 1985.”

Part of what has helped make this program grow is the Magness philosophy that their customers are “partners in this seedstock business.” According to Magness, “When you do business with Magness Land and Cattle, you’re doing business with an outfit devoted to creating an exceptional product, which impacts the success of our customers and the forward progress of the breed.” Moving forward, Magness is excited about the addition of Dr. John Edwards in October of 2011 as senior team leader on the Magness team “to help us continue to build upon our successes.”

Dr. Edwards, who has a PhD in Animal Science from Kansas State and was an Animal Science Professor at three universities prior to working for Express Ranches in Yukon, Oklahoma for 10 years, says, “As team leader, my position is an advisory role. We have outstanding people in place, who are very good at what they do.” Kirk Johansen is in charge of farming, John Pence is in charge of show and sale cattle and George Hubbard manages the fall calving herd in Miami, Ok. Combined these three men have nearly 55 years of experience at Magness.

The Brand
Over the past 25 years of breeding and selling bulls and females, Magness has built its reputation around Limousin genetics and in the last decade has focused more and more on Lim-Flex genetics as recognized by the North American Limousin Foundation (NALF).  Lim-Flex is the name that was coined by NALF to identify a hybrid of Limousin and either black or red Angus. Edwards notes, “The focus of our breeding program is to combine the strengths of the two breeds of cattle. We are combining the muscularity and efficiency of the Limousin breed with the maternal strengths and marbling of the Angus.” In addition to the value of complimentarity of traits from the two breeds, the crossing of the two results in heterosis which results in increased vigor and longevity. The bottom line? By combining the strengths of two breeds of cattle, Magness is trying to achieve the greatest gain for its commercial customers.

At the same time, the Magness brand is focused on three key components:
Integrity as a breeder
Strength of the brand
Ability to meet the specific needs of the customers

Based on this, Edwards says Magness is always trying to create the commercial bull that will add value to the commercial cattleman’s herd. Of course, the same holds true for the females that will become replacement females within the Magness herd or in the herds of other Limousin breeders. Paul Roen, manager of E. Roen Ranches located in Knights Ferry, CA., believes in the Magness breeding program, noting that they started using Magness bulls in 2000, focusing primarily on Lim-Flex genetics.  “We started with an English based cowherd, and as a result of heterosis and trait complimentarity, we have seen improvements in weaning weights, feedlot performance, uniformity and carcass merit.  Our calves have been fed in an all natural program and have graded as high as 93 percent Choice while, at the same time, hanging carcasses with an improved yield grades.  As a result, our calves have continued to sell at the top of the Superior Video Sales in Winnemuca, Nevada each summer.”

Marketing
Cattle are marketed through auctions and private treaty sales. Each year Production sales and online heifer calf sales are held. A special show heifer sale is scheduled for January 13, 2014. This sale features spring born heifers with the quality and pedigree to be competitive show heifers and
future brood cows. By going to the Magness Land and Cattle website (www.magnesscattle.com) prospective buyers can view sale details and offerings, including details and video of each lot for the January sale.

The 2014 MAGS Annual Bull Sale will take place on Sunday, March 23, 2014 in Miami, Ok. “This sale will feature the carload of bulls and pen bulls that we exhibit at the National Western Stock Show in Denver each January,” says Edwards. “In eight of the past ten years, Magness has exhibited the Grand Champion Limousin Carload of Bulls.  Approximately 120 bulls will be offered in total. Information will be available on the Magness website after March 1, 2014.

A fall production sale featuring mature cows is generally held each October in Miami, Ok. Again, check in on the Magness website to find details later this summer.

Edwards notes, “The private treaty sales give our customers the chance to come to the ranch and evaluate the animals for sale. We are able to discuss what the client is looking for and as a result, we can better help them achieve their goals. “At the time of sale, the customer receives all the information that Magness has for that animal including pedigree and performance information. As has been the case since its inception, Magness stands behind each animal sold and guarantees the structural integrity and breeding soundness of each animal sold for one full year.

The Future
Magness believes that the future indeed looks bright for the American beef cattle industry. The commercial cattle sector is enjoying price structures that are unprecedented for those who produce cattle that fit the specifications demanded by the consuming public. As the Magness team believes in the future of the cattle business going forward, Magness Land and Cattle launched a strong youth program some years ago. According to Edwards, “Our youth will obviously play a strong role in the development of our breed and the commercial industry. From this group will come the next generation of cattle breeders and producers interested in Limousin genetics.” To encourage these youth, each spring Magness sponsors a special heifer show for youth exhibiting cattle that were purchased in a Magness sale, are sired by a Magness bull or out of a Magness cow. Twenty thousand dollars in premium money is up for grabs, and the show is held on the same weekend as the Oklahoma Junior Limousin Association State Show.

The brand you trust-the results you expect.
This is the Magness belief in a nutshell. Relationships between breeder and customer are built and nurtured. “We have many repeat customers who have over the years come to trust the Magness brand,” says Edwards. Paul Roen can attest to this over the past 13 years. Here is what he says about their most recent results. “This year, 2013, our steer calves dollared up an average of $1,300 per head on over 1000 steers. On the maternal side of the equation, we are seeing improvements in pregnancy rates and milk production. These are real world results that impact our bottom line. It goes without saying that we are very pleased with the dramatic improvements that the Magness bulls have brought to our operation.”