Lifestyle: Rythmicure Faith, Love and Livestock The Story of Rythmicure 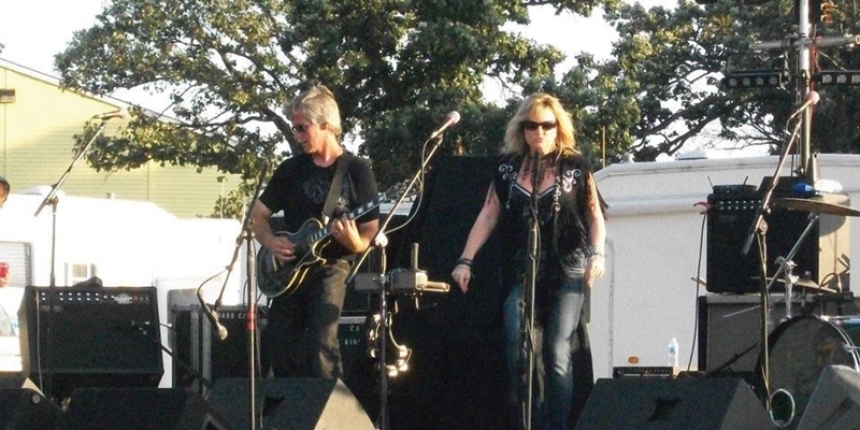 The Long and Winding Road,” a ballad written by Paul McCarney and one of the Beatles’ many number one hit songs, aptly describes the journey that Dan Tritle and Karla Oleson Tritle have experienced over the course of their lives. Little did Dan, who grew up on a farm near Spirit Lake, Iowa, and Karla, who was born on the south side of Chicago, Illinois, realize that their long and winding road would eventually lead them into marriage and to become the leaders of Rythmicure, a high-energy Christian rock band that recently released its third studio album on Lamon Records out of Nashvville, Tennessee.

The Beginning
Dan and Karla grew up 500 miles apart. Dan was a country boy from northwest Iowa, while Karla was an urban girl living in the largest city in the Midwest. Two opposites with one striking similarity: their love of music.
Dan’s family roots go back to the original quarter of land homesteaded by his great grandfather in 1898. Over the years, the farm has been a dairy farm, a cow/calf operation, a huge feeder cattle operation and now a row crop farm. Growing up, Dan loved the farm and showed beef cattle at the Dickinson County Fair. At the same time, music was also very important to Dan and the entire Tritle family.
After graduating from Spirit Lake High School in 1983, Dan headed to Iowa State University in Ames, Iowa. However, after three years, Dan felt the need to head back to the farm to help his dad. The cow/calf and feeder cattle operations were growing, but then things went bad in the 90s and the cattle operation went under.
As a result, the 90s were a very difficult time for Dan, and it was during this time that his love of music helped him make it through. “Everything has been a twist of fate,” says Dan, “and everything happens for a reason.” To this day, Dan has written over 500 songs and kept them all in four huge notebooks. Yet, even with the healing of his music, Dan was still searching for something on that long and winding road. He had bounced back from the demise of the cattle operation to begin his own Tritle Construction Company, which has grown tremendously over the past 12 years.
Then there was Karla, who knew city life and nothing about the country. She, too, was on her own long and winding road. Even in elementary school, she loved music. As early as second grade, she and her two sisters, Karen and Kristi created a musical group, which, based on their height, they called “The Shortstops.” Music took center stage all through high school with musicals and choirs at the top of her list.
She then went to Waldorf Junior College in Forest City, Iowa, graduating in 1980 with majors in music and business. As a soprano soloist in the college choir, Karla was following in the footsteps of her mother. She returned to Chicago to complete her four-year degree in music when her mother became severely ill. Karla then decided to quit school so she and her sisters could take care of their mother. She turned her part-time job into a full time career in retail and put her singing career on hold.

The Roads Come Together
How do two adults, total strangers and from totally different backgrounds, end up being lead singers in a band and married? Again, the answer lies in the long and winding road. Oh, and a mutual friend, Brian. Brian had attended Waldorf at the same time Karla did and at their 20th year class reunion, he asked her if she had accomplished her lifelong goal. Karla remembers telling him, “It’s always been my dream to sing in a rock band.” Her answer was, “No.”
In the spring of 2002, Brian happened to meet up with Dan, who told him he was looking for a good female vocalist. Today Dan says with a smile, “Brian told me about a girl he had gone to college with who had a great voice. He said she lived in Chicago, and he gave me her phone number.”
“I gave her a call, and we spent nearly five months off and on talking about music,” Dan notes with a laugh. Karla responds, “I was too shy to audition over the phone. So we kept talking on the phone, plus I wanted to make sure Dan was normal!” Then in August of 2002, Dan made a final pitch, telling Karla he would pay for her flight from Chicago to Spirit Lake if she would come and audition.
“We actually did the audition in the garage at the farm,” says Dan. Karla reminisces how everything just seemed to click. “We started singing and our voices just blended together. We stopped, looked at each other and just cracked up!”
That was the beginning of Rythmicure as it is known today. On December 28, 2002, they became a married couple and today live on the original farmstead. Now as they move forward on their musical journey, they have come together on the long and winding road.
Whether it is in the recording studio, on stage or singing at their local church, Dan and Karla believe music is about sharing feelings. “As artists, we want to deliver a message that connects with people and their own lives, but to do so, we must first emotionally connect with the song ourselves. If we don’t, we have not done our job, and the audience will not hear the message.”

Rythmicure’s recent release
Known as a high-energy contemporary Christian rock band, Rythmicure’s music has always set out to bridge the gap between faith and culture, using music to share the love of Christ with those who listen. Lamon Records Nashville recently released the third studio album from Rythmicure entitled “Secret Garden” and their new radio single and video is “Lay Your Hands On Me.”
The album is a change from earlier albums that included inspirational versions of songs everyone is familiar with. Instead, this is the first album with Lamon Records that features their own original material, creating an entirely different sound for the group.
Every song on the album stems from the emotions derived from a proverbial ‘Secret Garden’: relationships, creativity, solitude, and praising. Evoking everything from security and hopefulness, to loneliness and yearning, the album chronicles a journey to find a personal ‘Secret Garden.’
Rythmicure’s CD “Secret Garden” received Grammy eligibility for Best Contemporary Christian Album and was also on the final ballots for this year’s Dove Award nominations for Best Contemporary Christian Album.
“This is all part of our faith journey, to find our ‘Secret Garden’,” say Dan and Karla. “We believe that we all have a destiny. Hopefully this CD can help others find theirs.”
For more information on Rythmicure, visit www.lamonrecords.com.