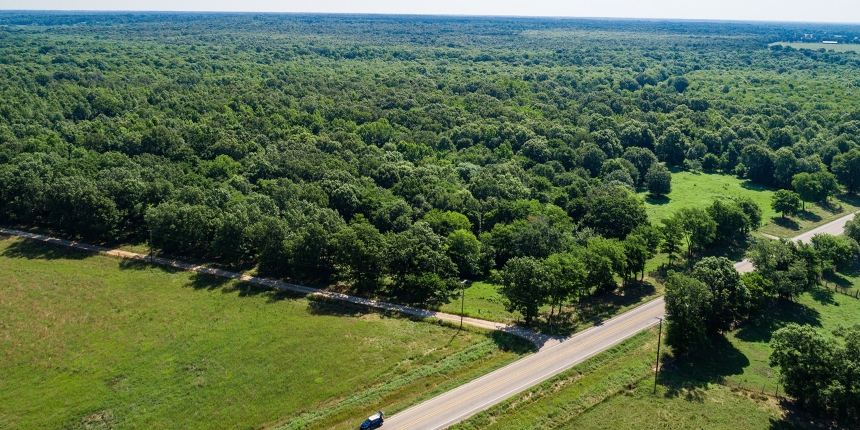 Bobby Woody originally had property in Tennessee, then moved to this larger ranch in Annona,  Texas after he fell in love with this beautiful setting and saw its potential.  “I’m 83 years old, and have owned this ranch for 25 years.

“When I bought it, my son Ray was taking care of our ranches in Tennessee and I told Ray it needed a lot of work, and that if he’d move down there to work on it I would move down there with him.  I didn’t tell my wife about it at first because we were living in her parents’ house where she was born and raised.  She’d told me earlier that she was born there and planned on dying there.  I didn’t think she’d want to move, but when she came down here to see this ranch it really impressed her,” says Woody.

“Ray and I were talking about it and he decided to sell all the property in Tennessee and come down here, so I told my wife that Ray and I were moving to Texas.  I told her she was welcome to come with us but if she didn’t want to, I’d just leave her in Tennessee in that big house.  But she said, ‘If you are going, I’m going with you!’

“We lived in the trailer house I bought, but when all the kids started coming to visit we realized we needed more room and she told me I had to build her a house!  So she picked out a spot and we built a beautiful  house, with a big pond in front of it, and she was really pleased.  Every time she’d look at that house she’d tell me that the Lord has really blessed us.”

Bobby and his wife moved into the new house, and Ray lived in the trailer 5 more years, then they built him a house.  They built a shop, two houses and a cattle barn, and graveled all the roads through the property.  Bobby built state-of-the-art cattle working facilities to make it easy to handle cattle, and restored the pastures and fields.  He made durable feed troughs from highway guard rails.
“I’ve had several ranches in my life, and this is the best I’ve ever had.  This one will grow more grass than you’ve ever seen, and also has 2,100 acres of rich farming land.  I spoke to the people who farmed it earlier and they said they’d never missed a crop and always grew really good crops.”  It has good soil that has never needed fertilizer.

A creek runs through the ranch.  “I  built a dam on the creek in several places and created many  watering places perfect for irrigation.  We never had to irrigate, however, because we get enough rain,” he says.

The Corps of Engineers created a 7-mile levee to protect the land from flooding.  The ranch is 3,000 acres of bottomland, with rich soil.  If there is a lot of rain, however, it would be prone to flooding, but the levee protects it and controls the water.  There are also 5 wells and an artesian well, in addition the houses are serviced by city water.

Bobby has been raising Charolais cattle since the 1960’s.  “I’ve probably had more Charolais cattle than anyone else in the country.  When I was in Tennessee, most of my cattle came from Canada.  Cattle imported to North America from France had to go to Canada and stay there awhile before they could come into the U.S.  I sell bulls all over the U.S.  Some customers drive more than 1,200 miles to buy our  bulls as they feel these bulls sire the best calves they’ve ever had,” he says.

The land is excellent and so are the cattle. They can be purchased together, but if a new owner wants just the land, the cattle will be sold separately.  Together, however, they are a nice package because the cattle are well adapted to this environment and thrive here.  The cattle and equipment are negotiable.  There’s a lot of new equipment—everything a person would need, to continue the farming and ranch operation.

The cattle are also a thriving and profitable  business.  We sell every bull, every year.   It takes a lifetime to get to where we are now in the cattle business and this would be a great opportunity for someone who wants to continue on with these cattle.”

This ranch and cattle would be a great opportunity for someone who wants to continue the legacy that Bobby started.