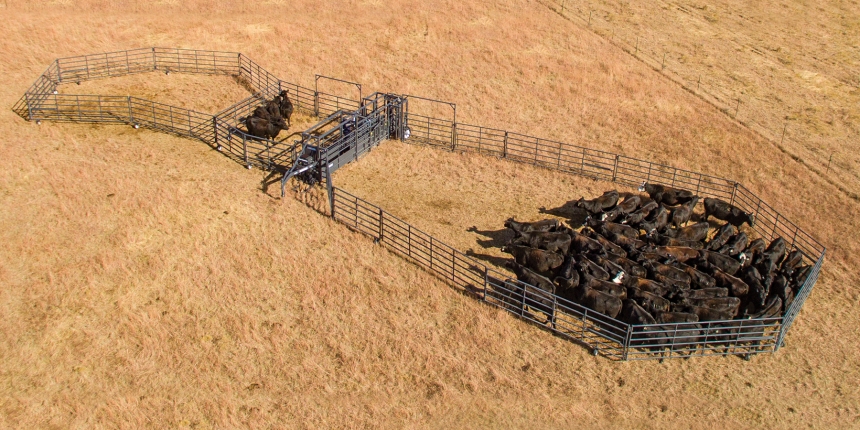 Keeping Safety and Security at the Forefront with Today’s Corral Systems.

Today’s corrals are far different than those of generations past. Nowadays, producers are much more conscious of cattle flow, low stress cattle handling and safety.

“There may have been a tendency years ago to think that handling cattle was just meant to be hard,” says Steve Langrell, cattle handling expert at Arrowquip, today’s corrals have better panels, slam latches, adjustment alleys, and emergency exits for downed cows—making the experience of working cattle a lot easier and safer.

Arrowquip boasts nearly 30 years of experience in designing corral systems, having been in use in Australia and New Zealand for years, and have only been introduced recently in America. Arrowquip has an in-house team of designers, and the design of the systems align with the basic principles of cattle behavior.

Arrowquip offers a fairly unique 1.5” x 3” rail on its panels. “This does a couple of things: When an animal slams up against it there is a very large surface area to minimize bruising; and another often overlooked factor is the high visibility to the cattle and by doing this, the animal has a lot more respect for the panel and will not challenge it so readily as in a small rail,” Langrell say.
In addition, Arrowquip offers a pound system which connects all the pens together—so it is like a central hub and can be used for sorting and getting cattle from one pen to another. Arrowquip’s pinning system is very easy to use and can connect four panels together in one connection. Quite a unique slam latch on our gates so that when you slam it, it doesn’t slam through or at least difficult to do.

Ethan McDonald with Rawhide Portable Corrals points out that for years corral systems were more or less just panels that hung on a trailer and had to be manually set up.

“My father then designed a system that allowed the self-contained hydraulic system to do the lifting of the panels while still being hinges to the ‘trailer,’” McDonald says. “Now we have full working systems built in an all-in-one unit and can eliminate labor and materials.”

Indeed was nearly 20 years ago, in 2002 when John McDonald first developed his Rawhide Processor, the first ever hydraulic portable corral on wheels, with multiple pens and a 200-head capacity. Today John’s original vision has expanded to include several options and an increased capacity.

“We can build corrals that are more suited to the customer just wanting to gather cattle and haul away. Then we also build corrals that allows a customer to catch all the way up to 150+ pairs and sort the calves off of the cows and then work both sets in our sheeted adjustable alley. To top that off, if you need to haul them away, we build a loading chute all in that once piece of equipment,” McDonald says.

“When purchasing a system look into the future and resale value. As you grow your herd how easy is it to grow your system,” Langrell says. “Will your system have good resale value if you decide to sell? It is also very important to have a good easy-to-use pinning system and good easy-to-use latches on your gates. Make sure you have a supplier who is in it for the long haul as you might want to add on with matching components in the future or if you smash something, you will want to replace it.”

R.L. Wilson, the original designer and patent holder of the Wilson Wheel Corral says that today  more units are being built on wheels for ease of movement. “All cattle equipment is being designed to move to the cattle as cattle isn’t kept in a permanent place anymore. The transporting ability has increased and is being expanded upon,” Wilson says. R.L’s son Daniel founded Burlington Welding, home of the Diamond W Corrals. “All of the products we build are built to be able to transport. Units are designed to be configured to use together or separately,” Wilson says.

Burlington Welding is developing several new products that are designed to be set up by one person and can be transported down the highway. These types of systems lower the stress factors on cattle by moving the equipment, not the cattle.

“This curbs weight loss because the cattle do not have to move from the field but can be worked right there,” Wilson says. “Safety overall is going to place a big role as we move forward. All equipment will need to be highway ready—this includes needing lights, reflectors, electric brakes and staying within legal highway width of 8’ 6” to transport on highways.”

McDonald advises producers think of all of the scenarios they may come across when catching or working cattle. “How many head do they have? What are the sizes of the cattle? Do they need vaccinations? Will they be loading into a semi or stock trailer? Then evaluate the raw material that it is built out of—some are much shorter and lighter.”

Kayla Maddox, marketing manager at Tarter USA says when Tarter works with customers, they will want to know all they can about a producer’s project to better serve their needs. A few of the questions they may ask include: What do you expect the system to accomplish? How many animals will occupy the system? Do you have an amount of working space you desire?
After obtaining this and other information Tarter will discuss options and generate possibly a CAD drawing for the producer to review.

“Tarter has an assortment of panels and some of those consist of laser-cut bracing, continuous welded joints, and hardware that allows for multi-configurations,” Maddox says. “Tarter can provide a CAD of your system, which allows us to maximize your project to its full potential while showing you a parts breakdown. It also provides us with an overview of your project and what products would work best.”

Maddox says it’s important that cattle producers should put in a corral system that allows flexibility.

“Times change and so do programs never put in a system that will keep from expanding or change,” Maddox says. “You need to be able to add to an existing system to expanding your program later. You may decide to add an alley, or need a place to hold your neighbor’s bull that has ended up on your property the third time in a week.”

And for those producers who embrace state-of-the-art technology through all facets of their operations, Moly Manufacturing offers a big technological advancement in today’s corrals. The company’s remote-controlled Turretgate is the only remote-controlled tub that offers continuous forward flow, while keeping the operator safely out of the high-impact area.
According to Jon Mollhagen, president at Moly Manufacturing, one of the biggest mistakes some cattle producers make is trying to adapt an older corral that really doesn’t work.

“Just adding a few panels to an existing corral can cause more problems. Sometimes it’s best to start from scratch,” Mollhagen says. “Drainage is an issue that can be easily overlooked and should be addressed before starting a corral project. And safety is key. Keep people out of high-impact areas. It is 100 percent safer to be on the outside of a pen than on the inside. Gates, pens and stationary objects can be very dangerous.”

Moly Manufacturing builds all equipment to-order, all based on the producer needs. They start with the type of operation, number of unique animals in the corral and if a rancher needs it portable.
So how often do corrals need to be upgraded and replaced?

Wilson says that most producers upgrade their corral systems due to their age. Newer units with more walk-through gates help the older generations work through the systems, even when they cannot climb over the panels as easily anymore.

“The older units had manual lift systems on the panels, where the newer systems use winches that are easier and much safer. The newer units also have bigger center divide gates and some tires have been replaced with hard rubber tires, eliminating the flattening of tires,” Wilson says.

Maddox says if you notice the tubing or bracing are broken, and/or failing connectors, it is best to replace than to have an animal or yourself injured. Once a weld is broken or a sharp edge is exposed, make a note to replace it.

“As far as upgrading, it depends on your existing or future projects,” Maddox says. The best practice is to purchase corrals that will fit your situation, heavy confinement equals heavier panels. This will cut down on replacing panels.

“I can tell you from experience I never grew up using these systems—it was random panels or wooden planks with configurations that didn’t support a lot of cattle science,” Langrell says. “When we introduced these systems in America, we put a full system in our working ranch. It took me a couple of times using it to really familiarize myself with it as it was something totally new for me. Now I would never go any other way.”