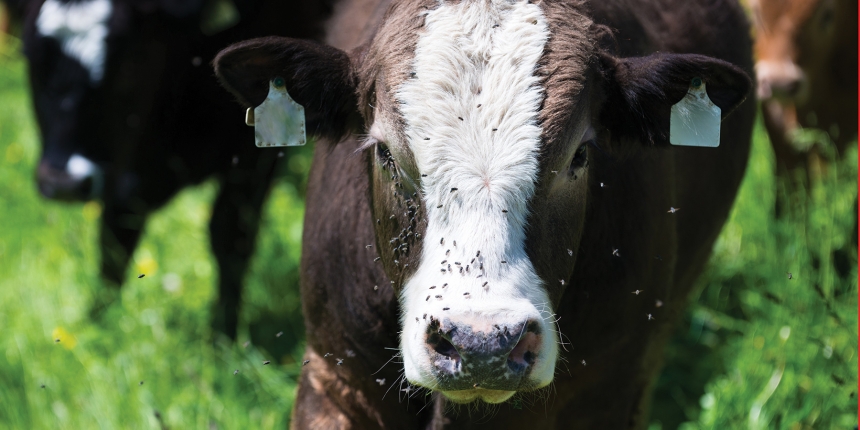 There are a wealth of health and wellness issues that producers need to constantly monitor in order to keep their livestock in good condition and their bottom line intact. But one particularly frustrating issue for ranchers, farmers and livestock alike, is the burdensome fly infestations that occur in herds – both large and small. Regardless of if your fly control issues are seasonal in nature or year-round, taking proper precautions and using proven techniques is essential to the well-being of your animals.

According to Y-TEX Corporation’s entomologists, Dr. Mike Fletcher and Barbara Hull, fly infestations can cause reduction productivity and profitability in beef and dairy cattle herds. Defensive behaviors reduce grazing time which can result in lower weight gain and milk production.
“Face flies can transmit diseases like pinkeye because they move from one animal to another and horn flies take many small blood meals so a heavy infestation can result in significant blood loss,” Hull says. “Stable fly bites are extremely painful, and animals can be seen standing in water for hours to avoid stable fly bites. For farmers and ranchers with close neighbors, large numbers of house flies can cause ill will (and even lawsuits).”

Y-TEX offers a variety of ear tags with different modes of action to help control insecticide resistance. OPtimizer and Max 40 tags use diazinon (an organophosphate) as their active ingredient; GardStar, PYthon II, and PYthon II Magnum use synthetic pyrethroids; and XP 820 uses abamectin (a macrocyclic lactone). TRI-ZAP is the only combination tag on the market, containing a combination of abamectin and pyrethroid.

PYthon II Dust is available in shaker cans and for use in dust bags. Brute is a ready to use pour on and GardStar 40% EC can be used as a whole-body spray.

Central Life Sciences also offers several different fly control products, including Clarifly and Altosid, both work by stopping the development of flies in treated animals. As Reina Lewis, sales development manager at Central Life Sciences explains, Altosid is made specifically for cattle raised in pasture to control horn flies, which is the most prominent fly for pasture cattle, and then Clarifly is better suited for animals raised in confinement, like a dairy cow. It can also be utilized for beef cattle. horses, sheep, and swine.

While fly infestations are certainly a nuisance for producers, their employees and the animals, we wouldn’t be talking as much about them if they didn’t affect the producer’s bottom line.

“In a beef cattle setting, when we talk about cattle on pasture, the horn fly, in particular can cost beef producers in North America up to over a billion dollars a year,” Lewis says. “It is a very pervasive fly species. And then in the dairy scenario, when we talk about how can flies impact producers, research shows that as little as four stable flies can reduce production by 3% per month. Plus, all of these flies can carry several diseases that affect cattle or sheep or goats, including bacterial diseases like mastitis or perhaps something viral like bovine virus diarrhea.

Jim Skinner, president and CEO of Terragena, says that researchers estimate that flies are responsible for the transmission of more than 65 diseases. For example, face flies, that are in the same genus as the common housefly, are often responsible for eye infections in dairy cows.

“Infected cows are then provided with antibiotic therapy, but have to be taken out of milk production as antibiotic residue is not allowed in milk for human consumption. This represents a major economic hardship for the dairy farmer,” Skinner says.

Unfortunately, as Skinner explains, flies have gained resistance to most, if not all, toxic chemicals. The chemicals, simply, are less and less effective based on usage directions.

Terragena currently offers two products for fly control. Both are natural/organic, non-toxic and safe for humans and animals.

The first is balEnceTM, which is a naturally occurring fungal spore called Beauveria bassiana (Bb) that is a host specific pathogen, meaning that it is only attracted to its host – i.e. the adult fly and fly larva.

As Skinner explains, Bb is a living spore, which already exists in the soil throughout the world but not in enough quantity to address the explosion of the fly population in congested areas like those found around dairy farms.

“Our Bb product, balance, gets on the fly, penetrates the soft tissue of the fly, grows inside the fly, consuming and killing it. We provide a liquid suspension of the Bb spores cultured, grown and quality controlled in industrial quantities,” Skinner says. The liquid balEnce is added to a sprayer, water is added and the mixture is sprayed safely in the barns, calf hutches, etc. to kill the flies.

“By applying balEnce, the farmer is simply adding back to the area the same naturally occurring Bb spores, but in a large enough quantity to control the fly population,” Skinner says.

As the Bb is a living organism – not a toxic chemical - it is safe for other insects, such as bees. “The pest control industry is moving towards biological control to replace the toxic chemicals, which is what we have been doing for more than sixteen years,” Skinner says. “Flies do not develop resistance to balEnce as with most chemical pesticides, so rotation of pesticides is not necessary.”

The second product offered by Terragena is the parasitic wasp. This is a tiny parasite about the size of a gnat. The female parasitic wasp drills a hole in the fly pupa – the third stage of the fly life cycle (egg, larva (maggot), pupa and adult fly). The pupa has a hard shell and looks like a grain of brown rice. Once the female wasp drills the hole in the pupa, she deposits one or more eggs in the pupa. The eggs hatch into parasitic wasp larvae and they proceed to eat the developing fly, killing it.

“Perhaps the most important step animal producers need to take is understanding the life cycle of the pest they are trying to control, in this case the common housefly as well as the face fly, horn fly and stable fly, among others,” Skinner says. “The strategy is to treat the flies based on their life cycle rather than a treatment program based upon spraying when it is convenient for the farmer.”

Mike Pfaff, Ohio distributor for Lewis Cattle Oiler, says fly control starts with proper manure storage, as well as cleaning pens or feedlots daily. Pfaff also suggests having Altosid IGR fly control tubs out in every pasture and having a Lewis Cattle Oiler in every pasture for fly lice and external parasites is a plus. At its core, the Lewis Cattle Oiler applies a topical insecticide, which is rubbed into the animal’s coat right down to the hide. What’s left behind is a residue on the animal’s coat and hide that kills pests on contact. As fly season wears on, fly populations generally increase. In addition to horn flies, face flies, stable flies and mosquitos, the applied insecticide also keeps ticks and lice at bay.

“The best strategy is performing daily checks on cattle during fly season,” Pfaff says. “Also use a good rub-on oil in your oiler.”

Mistakes To Avoid
When it comes to avoiding some common fly control mistakes that producers make, Fletcher and Hull at Y-TEX suggest that producers should ensure that they are rotating active ingredient types.

“Just switching products doesn’t ensure that they are using different chemical classes. Applying ear tags too early in the fly season means that the tags can be close to the end of their efficacy just as fly numbers are peaking,” Hull says. “Additionally, not removing the tags at the end of the season can expose flies to a sub-lethal dose of the active ingredient, which can help resistance develop more quickly.”

Pfaff also suggests that using the wrong type of oil in an oiler, or if diesel fuel is used there is the common mistake of not mixing it correctly or leaving it in the tank too long.

“Producers also have to understand that they can utilize some traditional baits and sprays however those are limited,” Lewis says. “There’s a limited set of actives that are approved by the EPA to utilize. So, I think when we look to the future of fly control, really going to see people who are looking for more environmentally friendly or cleaner chemistry. Companies like Central Life Sciences are working to find options that the EPA can regulate, that are useful, active and still find new ways to control these insect pests.”