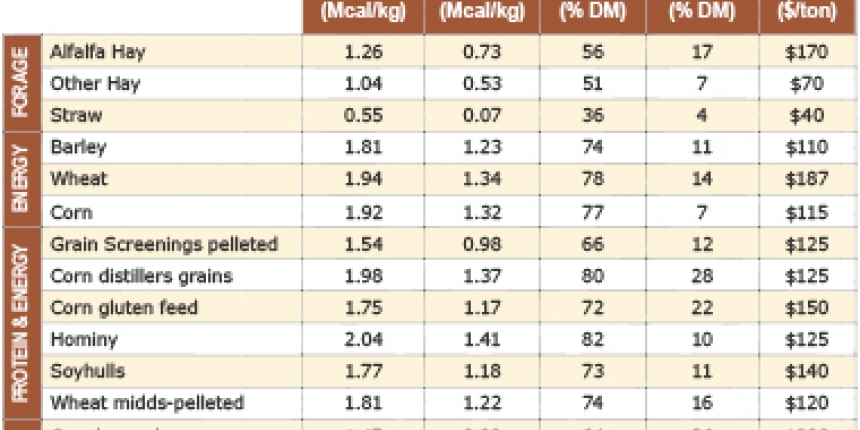 As 2014 draws to a close, the snow begins to fall, and various opportunities for extending the grazing season are ending, it is a good time to consider the opportunities that exist to manage your current feed inventory and minimize feeding costs during the coming winter. With cattle at record prices and grain prices declining markedly relative to the past few years, it may be tempting to become complacent about minimizing feed costs, but this would be ill advised. This may in fact be the best time to invest in new practices and technologies to help weather the next, inevitable downturn in the cattle cycle.

Manage current forage inventory: For best results, forages should be categorized and partitioned by feeding value based on feed analyses, with emphasis placed on both energy content, as described by net energy of maintenance (NEm) and/or gain (NEg), and protein. This will allow the most meaningful assessment of value per unit of energy or protein, and determination of the best allocation of these resources for feeding cows versus calves, as well as relative to stage of production.
Cows in mid-gestation have very low nutritional requirements and will do well when fed ad-lib a diet containing 1.20 Mcal/kg (57% TDN) NEm and 8% crude protein. This can be supplied 1) exclusively by a medium quality grass hay, 2) by blending straw or a poorer quality hay with a better quality, higher protein, legume hay to balance the protein content, or 3) by blending available, inexpensive forages with cost-effective byproducts that supply protein, or a blend of protein and energy. Better quality, higher energy forages are best saved for feeding during late gestation, during calving and prior to breeding. Finally, determining now whether you have sufficient forage for the entire feeding season will enable you to plan and make necessary supplemental feed purchases earlier and less expensively, rather than waiting until later after prices have risen, as they do seasonally every year.

Consider alternative feedstuffs: While the prices of both hay and grain have come down substantially from the heady levels following the drought of 2012, it appears the price of hay has not come down as much in relation to grain. At the same time, the ample supply of grain, combined with the reduced number of cattle on feed, appears to be creating attractive buying opportunities for certain feedstuffs that could be profitably incorporated into a feeding program, especially relative to forages.
Table 1 gives a selection of some typical feedstuffs and by-products that are routinely available on the market. The energy and protein values were based on NRC Beef, 1996, while the prices were adapted from a combination of values published by the USDA, National Agricultural Statistics Service (Octobers 2014) and the University of Missouri Extension Service USDA (November 20, 2014). Forage and grain prices should be considered “farm-gate” prices, while those for the by-products are near the average, in truckload quantities, F.O.B. the manufacturer. For your own situation, it would be best to shop around your area to see what would be available, and at what cost, once local market conditions and freight etc. have been figured in.
Nevertheless this table demonstrates the value of comparing the ingredients on the basis of NEm for maintenance rations such as for beef cows, or NEg for growing calves, as opposed to TDN. First, one can see that straw is a relatively poor nutrient economically, though apparently cheap at $40 a ton, because it will cost $8.02 per 100 Mcal NEm (daily requirements for about 9 cows), compared to $7.42 for regular “beef hay” at $70 per ton, and the straw will require extra protein supplementation as well. Better quality alfalfa hay worth $170 per ton, is actually quite expensive to feed at $14.87 per 100 Mcal NEm.
On an energy basis, corn is the least expensive ingredient to feed at $6.60 per 100 Mcal NEm, with barley close behind at $6.70. However, corn distillers grains are a particularly good value at $6.96 per 100 Mcal NEm because they also contain 28% protein. Thus a ration containing straw, medium quality hay and some distillers grains might in some cases provide the lowest feed cost per head per day for maintaining the beef cow herd post weaning.
When we look at growing calves, the picture changes, because we focus on the NEg values. This is because the relative energy content of feeds change as the efficiency of digestion decreases as dry matter intake as a proportion of body weight increases. Thus for growing calves, the cost of energy for straw, beef hay, corn, barley and distillers grains change to $62.99, $14.56, $9.60, $9.86, $10.06 per 100 Mcal NEg. This demonstrates how expensive it is to force straw or poorer quality forages into diets for growing cattle. These types of forages also generally need protein supplementation to bring the ration up to 12 to 14% on a dry matter basis. Again, using byproducts, such as distillers grains, wheat midds and corn gluten feed, can be very economical because they supply significant amounts of both energy and protein.
If you have not done so before, this year, consider talking to the feed suppliers in your local area to determine the cost of alternative feedstuffs that are available in your area, and then assess them on a cost per unit energy and/or protein basis. The best way to do this is to have someone use a computer program that is capable of least-cost ration formulation. There may be a relatively simple way to improve your feeding program and at the same time decrease feed cost this winter. Remember, you can always save that hay for next year, or even sell some of it this year for an even greater return — “Because Nutrition Matters.”

In the past two issues of TMR Corner we have...

There are many obstacles to overcome when putting...