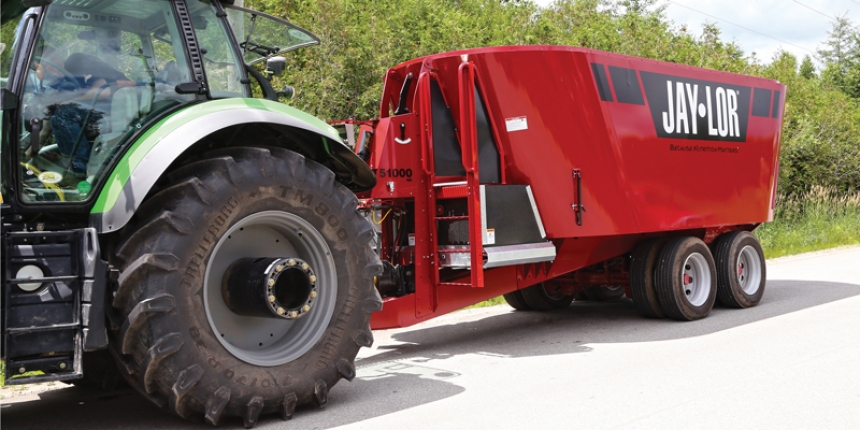 There are currently about 40 brands of TMR mixers being marketed across North America today. In such a competitive environment, it therefore may not be surprising to see the following claim surface: “Time and again [a specific TMR mixer] has a near perfect trace mineral lab test for consistency. . . .” Such a claim poses a couple serious questions. First, what is meant by a “trace mineral lab test,” and what is its relevance to testing mix uniformity? And second, given that the ingredients that go into a TMR mix are known to be variable and challenging to mix, is it possible that a test that consistently gives “near perfect” results, is actually unable to measure the variability that exists? These are the important characteristics of valid TMR mixer uniformity tests that are discussed below.

Goal of TMR mixer uniformity testing: The goal of TMR mixer uniformity testing is to determine if ingredients with known extremes in nutrient content and/or physical characteristics of nutritional importance have been adequately distributed among the total mix, such that animal performance will not otherwise be impaired. The concept of “known” and “nutritionally important” extremes is critical here. For example, if all the ingredients have the same nutrient content, a lack of mix uniformity should not be an issue, since all animals will receive the same dietary nutrient composition, regardless. In the same way, if you select a specific nutrient to test for mix uniformity that has a high concentration in all ingredients (e.g. iron, zinc etc.), you would not expect to see significant variation in these trace minerals across the mix, while there could be large variations in grain content, for example. Thus in any mixer uniformity test, it is important to know which component of the diet is most important to test for variability, and then select an appropriate test that is capable of detecting that variation.

A note about sampling: The accepted minimum standard for mixer uniformity testing is the take 10 samples from small segments of the batch as it’s discharged, or equally spaced along the entire length of the feedbunk(s) after it has been fed out. Keep in mind that the process of sampling can introduce significant amounts of variability to some test results, and thus care needs to be taken to be as consistent as possible.

Non-feed markers: It has been a practice for many years to introduce a range of unique items, such as small carrots or candy, to mixes to act as markers with which to assess mixing action and mix uniformity. One of the challenges with this method is identifying which ingredient or fraction of the mix the marker is representing, especially forage vs. concentrate. Often there is no real relationship due to differences in size and density. The other issue is how many pieces or particles are required. If only sufficient particles are added to obtain an average of ten particles per sample, then a deviation of only one particle will represent a variation of 10%, which would also be the limit of sensitivity of such a test. To be useful, a non-feed marker should ideally flow with an identifiable fraction of the feed (either forage or grain), and result in a minimum average of 100 particles, or measurable units, per sample, to give a minimum sensitivity of +/- 1%.

Chemical analysis: Full nutritional chemical analysis (dry matter, protein, energy, fiber, macro-minerals and trace minerals) of the samples should be considered the gold standard for assessing mix uniformity. However, interpretation must be done with an understanding of the underlying nutritional composition of the individual ingredients.
Firstly, the degree of variation in protein and energy (or fiber) generally indicates the uniformity of mix of concentrates and forages, as well as supplements into grains. In terms of animal performance, this is the most important assessment. The variability of specific macro-minerals and/or trace-minerals can be used to determine the uniformity of mixing premixes into the grain portion of the ration, or the entire ration, but care must be taken to select the correct nutrient in each case, to ensure that the majority of the nutrient is in fact coming from the premix. For example, calcium may be useful in high grain finishing rations (Ca is low in most grain, esp. corn), but would generally not be useful in diets containing a significant amount of alfalfa, which is naturally high in Ca. Likewise, salt, or more specifically, sodium (Na) may be useful in high grain feedlot diets, or dairy diets containing sodium bicarbonate, but again, it will likely be of little value with forage diets, since they often contain as much Na as one would add as salt. In many areas, copper might be usable for forage diets if it were known that forage levels were very low, and supplemental levels comprised at least 80% of the amount expected in the diet.
The one limitation to chemical analysis is that it provides no indication of variation in particle size, or effective fiber, which can be important in feedlot rations, as discussed below.

Sieving: Sieving separates ration samples based on particle size. With a three tray, Penn State Particle Separator (PSPS) style sieving system, one can basically separates a TMR into three fractions, long forage particles (cannot pass a 3/4 inch hole) on the top tray, medium forage particles (pass a 3/4 inch hole, but not a 5/16 inch hole) on the middle tray, and fine, mostly grain, supplement and premix particles on the bottom tray. In this way, it is an effective and sensitive method (less than 1%) to test the uniformity of mix of forages relative to concentrates, as well as the amount and effectiveness of forage fiber in the ration. This can be especially important in feedlot finishing rations where minimum levels of fiber are fed, but are essential to maintain optimal rumen function and prevent acidosis. It is widely thought that maintaining a variability of less than +/- 5% of the proportion of weight retained on the middle and bottom trays should be acceptable for feeding ruminants containing up to 60% grain. Some vertical mixers, such as Jaylor TMR mixers, are capable of mixing to a precision of 1-2%, well below that required to ensure uniform consumption. It is also why Jaylor supplies a Jaylor “Shaker Box,” a PSPS type sieving system, with each of its machines, to ensure users have the means to test their own rations to maintain an optimal mix, as ingredient interactions and mixing procedures have a significant effect on mix uniformity, as has been discussed in previous articles.

A practical example: I have demonstrated the effects of testing method selection on mix uniformity results in Table 1. An example beef grower ration was formulated with a 50:50 forage to concentrate ratio using three ingredients: 1) mixed, mostly legume haylage (40% dry matter, 20% top tray, 65% middle tray, 15% bottom tray), 2) a grain mix containing barley, corn and supplement (100% bottom tray), and 3) a feedlot premix (10% calcium, 8% sodium and 2400 ppm, fed at 0.25 lbs. per day, 100% bottom tray). Then, to simulate non-uniform mixing, both the forage:concentrate ratio and premix inclusion rate were varied by +/- 20% to determine the effect on sample composition. Using statistical methods, the extent of variability in diet composition that was attributable to forage:concentrate ratio, as well as premix inclusion, was determined. As can be seen from the table, sieving, and in this case, chemical analysis for Ca and NDF, would be good methods for analyzing variation in forage or concentrate content within the mix due to the large differences in concentration within each ingredient. Alternatively, trace mineral or protein analysis would be a poor choice for evaluating mix uniformity of concentrates or forages, but may be acceptable for specifically assessing premix distribution throughout the total mix, as long as the appropriate nutrient is chosen; in this case either sodium (Na) or zinc (Zn).

In summary, sieving has rapidly become the testing method of choice for TMR mixers because it gives a rapid, low-cost assessment of the relative distribution of forages and concentrates, the two components that have the greatest impact on animal performance and animal. Beyond that, it may occasionally be appropriate to do a full chemical evaluation of the TMR mix, or analyze for a specific nutrient, to ensure a specific component of the ration is otherwise being mixed adequately. This is often done with medications, for example, to ensure that effective control levels are being maintained across the feedbunk. In contrast, testing for a specific component such as “trace minerals,” gives no assurance that main energy and fiber ingredients are being mixed uniformly, or even adequately.
In the end, be sure to use methods that are known to test the most economically important characteristics of your TMR mix, and most importantly, do those tests on your own rations — “Because Nutrition Matters.”