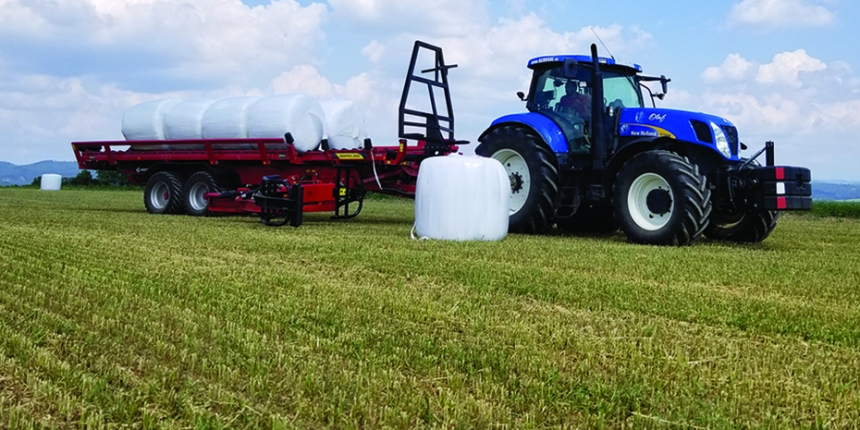 By Michael Cox for American Cattlemen

The pace of modern technology improvements shows no signs of abatement any time soon, and hay equipment is no exception to this trend. Equipment improvements and new features for harvesting, handling and feeding out hay continue to be offered to farmers across the nation. Some of the most recent interesting innovations in hay equipment include a net-wrap remover, a self-loading trailer and a self-propelled baler.

Peerbuilt net-wrap remover
South Dakota based Peerbuilt LLC recently debuted their new patent pending net wrap remover. This implement is an attachment for skidsteer or tractor front loaders. Much like a normal three-spike type loader implement, the new net wrap attachment carries out all the basic functions of typical bale handling equipment. The current design of the product uses two cradle arms along the bottom of the implement. These two arms are hydraulically controlled to open and close, so the driver can quickly and easily slide the implement underneath hay rounds. Once the bale is in place, the driver can then squeeze the arms together to lift the bale off the ground to transport to the feeding area. While most front loader implements utilize a long middle spike to spear and carry the bale, the new feature on this Peerbuilt model utilizes an adjustable spike which slides into the bale just below the net-wrap. A full-length sleeve can then be hydraulically closed to catch and squeeze the net-wrap between the sleeve and spike. Finally, when the lower cradle arms are opened, and the bale falls down, the sleeve and spike have grabbed the net-wrap; the bale falls down and the net-wrap is removed. The driver can now transport the net-wrap to a waste collection pile. Overall, the implement allows the driver to pick up, move the bale and remove the net-wrap while never leaving the comfort of the cab. Given the recent cold weather across much of the States, this would certainly be a welcome addition to many ranches. 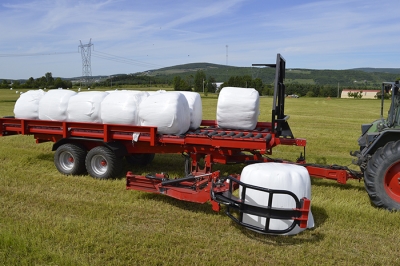 Self-loading trailer from Anderson Group.
Another recent innovation for hay handling equipment is the self-loading bale trailer from Anderson Group. This novel design effectively eliminates the need for two people and two machines to load and transport rounds from the field to the storage area. The trailer is a trailed implement which can be used behind a tractor. As this trailer is self-loading, it uses a hydraulic controlled arm to slide under a bale, lift the bale up and tip it into the trailer. This loading arm is very similar to the loading arms found on trailed table bale-wrapping machines. The arm can handle round bales and a square bale option is also available. The standard model self-loading trailer can carry up to fourteen bales at a time when fully loaded. The trailer has two ‘slides’ on that can each hold seven bales in a line, which keeps the machine to a relatively compact size. A ram at the front of the trailer pushes the bales down along the ‘slides’ towards the rear of the trailer as it is loading. There are several trailer size models available, ranging from carrying capacity from six bales to twenty bales.  To unload, the driver must reverse the trailer back to the line of bales; the trailer will then tip up, and the bales will slide down and out of the trailer as the tractor moves forwards; leaving the bales neatly in a line. The ram also acts as a ‘push-off’ feature, which can be used to push the bales down the trailer so that they slide off easily.  The benefits of the trailer are increased efficiency and less equipment and labor needed to haul in bales to storage. The heavy-duty nature of the trailer and tandem axles means it is capable of carrying both dry hay and wet rounds safely and with ease.

Vermeer Self-propelled baler
One of the most unique innovations in modern hay equipment is the first of its kind self-propelled baler from Vermeer. This machine features similar features to many different pieces of machinery on the market, yet Vermeer have created an impressively unique machine by combining baler and tractor elements into a single self-propelled machine. Featuring cab suspension, hydraulic drive on the baler component and rear wheels, the baler claims to improve output, comfort and efficiency for the driver in the field. One of the main benefits of the baler being self-propelled is its zero-radius turning ability. The machine can turn on a nickel and minimize non-harvesting time on headlands as it can quickly turn into baling the adjacent windrow. Another interesting feature of the tight turning ability is the option to swivel the machine left or right to release the tied bale parallel to the windrow. Vermeer claim this aspect of the performance can increase subsequent bale pick-up by over 25 percent. Luckily, all of these steps can be easily manipulated by the driver with the push of just one button, which will stop, wrap-tie, swivel and dump the bale in position. Vermeer believes the days of trailed balers will soon be a thing of the past and plans are in place for further upgrades and additional baler features and sizes, with subsequent rollout across the nation.
With excellent equipment such as these on the market, it is exciting to think what the future holds for further hay handling innovations.

Getting Ready for Hay Season

Getting Ready for Hay Season By Jaclyn...

Remember To Maintain Your Haying Equipment

Remember To Maintain Your Haying Equipment...