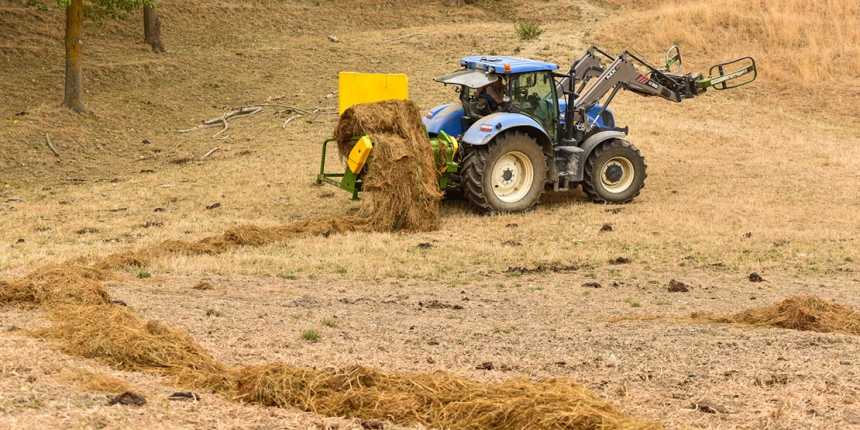 Unique feeding system
THE WORLD’S SIMPLEST SINGLE TRACTOR, BALE FEEDING SOLUTIONS
Hustler’s self-loading Bale Feeders allow you to equally feed your cattle with the correct amount of dry hay, baled silage or straw in just minutes, without ever plugging all from the comfort of your tractor seat. Part bale feeding is also a possibility allowing you to only feed what your livestock require, saving the rest for the next feeding, ensuring forage is fresh and waste is minimised. Pasture damage is also minimised, and manure is naturally spread throughout the pasture saving you time repairing pasture and spreading manure. Ranchers are seeing hay savings of as much as 40% compared to traditional methods and because the forage is gently teased apart the leaf with all its nutrition is retained, saving on nutritional supplements 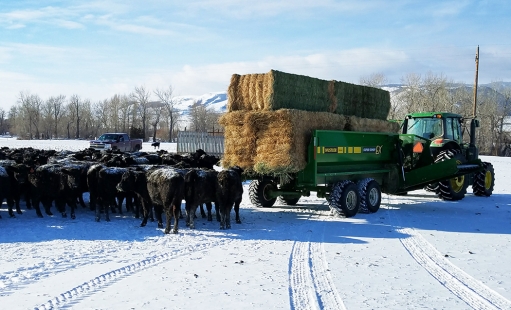 With more and more Ranchers embracing balage (baled silage), high moisture wrapped bales we saw the need for a processor that could reliably handle these bales without plugging, jamming and reliability issues. With Hustler’s latest X Series Chainless bale processor they can handle whatever bale type, shape and density with ease be it square or round bales of dry hay, haylage or balage. The unique low speed, hydraulically power rotors and adjustable platform provide infinite control of the windrow, and the forage isn’t thrashed like that of a ordinary bale processor meaning the highly nutritional leaves are retained instead of smashed to powder, the secret to why a Hustler bale processor can save up to 40% of your feed compared to other systems.
Thanks to the design of the low speed rotors, there are no wearing parts and a fraction the amount of moving parts compared to that of the conventional bale processor making the Hustler much more reliable, and lower cost of operation, along with substantial savings in fuel one rancher notes that he went from a tank of diesel per week with the conventional bale processor to around 3 tank refills per season with the Hustler.
All Hustler bale processors have built-in self-loading systems and are available in trailing models, 3 point hitch mounted models, and loading mounted models.

New Feedout Wagons
Hustler have recently introduced their innovative large capacity hydraulically powered Feedout Wagons in North America, which can carry up to 16 bales per load and work equally as good with round or square bales as they do with loose silage, corn, root crops or food waste.
The Comby range of feedout wagons utilise the same low maintenance, low power requirement principals that retain the highly nutritional leaf, however when compared to a TMR mixer wagon the entire load can be feed in less than the time it takes a TMR to mix the load! This offers substantial savings in time, and fuel savings in comparison and there’s nothing they won’t feed out

Sarah Salsbury – Montanna
Having purchased her first Hustler Chainless X5000 round and square bale feeder over three years ago, because she wasn't impressed with the way her dads' old bale processor chopped the hay causing a lot of waste. "We put all that time and energy to put up beautiful hay with all the Alfalfa leaves, and the processor kind of just blows it up into the air. I wanted to go with something that would just roll the bales out"

Walter Wichman - Montanna
Watler is a busy man, being a partner in Wichman Ranch and general manager of Wichman Ag Supply a machinery outlet in central Montanna. Having supplied all the traditional bale processor brands through his company he knows a thing or two about bale processors and what's good gear! "I've run bale processors for 10-15 years, and this is the simplest design on the market today" says Walter

Scott Merieka – Wisconsin
Scott has owned his Chainless X5000 trailing bale feeder now for 2 years, and feeds 1500 bales each year feeding them in open pastures and along a hotwire in his grazing system. Scott discovered that when he changed to the Hustler, it enabled him to increase his herd size by 53% (from 150 cows, to 230 cows with less replacements) without needing to increase his feed supply. He also claims that because his cattle are feeding in a cleaner environment they’re healthier and his in-calf rate has improved by 8-10% compared to the old system of using round hay rings.
“Our in-calf rate is 8-10% better than it was previously, and this season is the first year with a zero postpartum mortality rate with all of our fresh cows. And I think that’s 100% because of the way we’ve changed our feeding! It’s been a fantastic investment and in two years it’s basically paid for itself twice, I’m really, really happy. I really like my Hustler feeder a lot”.

Scott has found his Chainless X5000 a very safe and user-friendly option for any operator, and likes the fact that there’s no PTO which means he doesn’t need a high horse power tractor to operate it. He likes the self-loading system and safety mechanism because are very well thought out and there’s no chance of the bale falling off the loading spears. 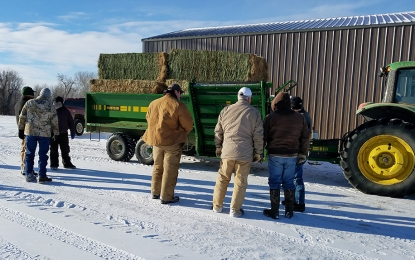 Lynn White – Louisiana
Before he purchased his Hustler SL360X Lynn would load his hay racks/mangers using a bale spear with whole balage bales every second day to each group of 40 cow-calf pairs to keep them happy, when Lynn saw the Hustler concept very quickly fell in love with it, and a SL360X was ordered last year to mount on the front loader of his 6170R Deere. Previously he would need to put out 14 bales every second day. Within just days of unrolling the bales with his SL360X directly into the hay racks Lynn is now only needing 10 bales every second day and the cattle are much more than happy than before, saving him 28% of his feed supplies within days.
For Lynn, this not only saves him bales and the cost of making them, but it's also saving his precious time, both at time of feeding his cattle and time of make his bales!
"I am so pleased with the way we are feeding our silage bales now"
With tighter pricing in the beef market this year, it provided Lynn with a good time-saving way of maintaining his profitability, and without needing to leave the comfort of the tractor cab to unwrap a bale in the wet, muddy conditions around the hay rack, instead this can be done in the yard at the bale stack, making it easier to dispose of the wrapping, and less handling.
The self-loading design has been very handy for Lynn, saving him time when loading up and gives him the ability to use the loading spears for his bale and pallet handling needs without needing swap loader attachments.

Tim Richards - Kentucky
When Tim’s TMR mixer wagon came up for renewal, he chose to replace it with Hustler's Chainless X5000 bale feeder for his indoor beef feedlot. What he discovered was that it has saved him a lot of time and cut his feed consumption back by 33%!
"Not only has it saved me an hour and ten a day, I've also cut back a bale"
Feeding his cattle with his vertical TMR mixer would take him 90 minutes to get the feeding routine done, that tractor would be sitting just grinding up the hay for 20 minutes alone. Since switching to the Hustler the feed out routine is done and dusted in 22 minutes.
With his TMR it took 3 bales fill his troughs, and keep his cattle contented, “because the TMR grinds the hay more and if the hay’s in front of the cows they'll just eat it” and now I have cut back to 2 bales in the Chainless and it fills his troughs and the weight gains haven’t changed.
The Chainless X5000 has also been saving Tim, a lot of fuel where before he needed one tractor to grind, and another tractor with front loader to load the TMR which was clocking up a lot of hours on his gear and wasting a lot of fuel. Tim loves the low power consumption hydraulic powered design with no need for a PTO shaft.
Tim choose to option his Chainless X5000 with the side chute to better place the feed in the troughs, and finds that "it works really well". Adding that it not only has saved him more than an hour everyday, but has saved him 1 bale per day!

These are just a few of Hustler’s raving fans, to experience the difference yourself, with your own bales, call (844)249-2092 or visit www.hustlerequipment.com to book your no obligation demonstration on your ranch or contact us to locate your nearest Accredited Hustler Dealer.

How you too can save on your feed costs, and boost profits

How you too can save on your feed costs,...