Heartbrand Beef: the next step 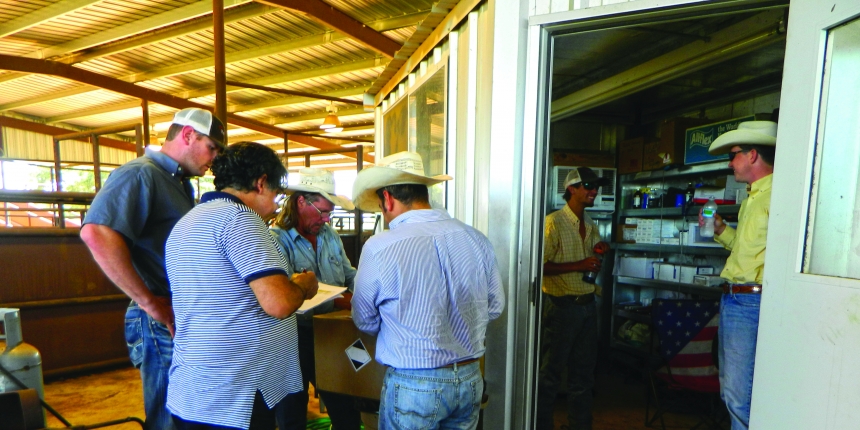 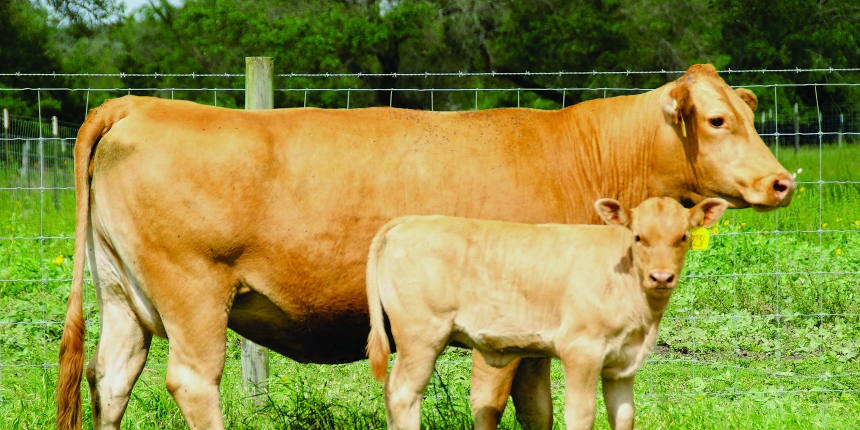 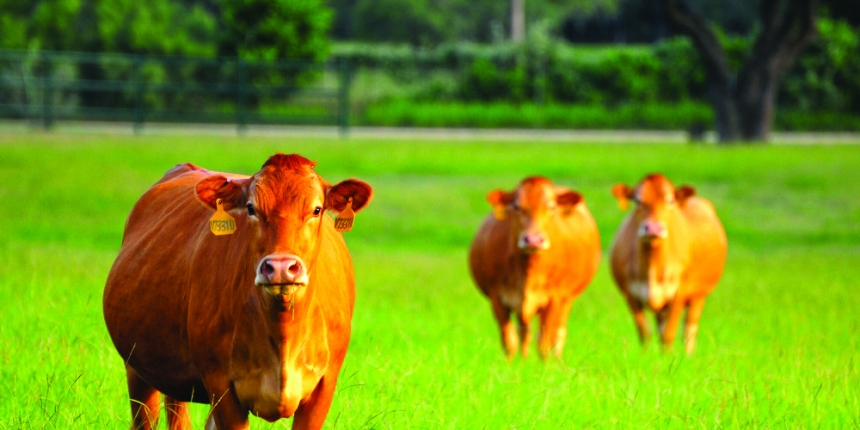 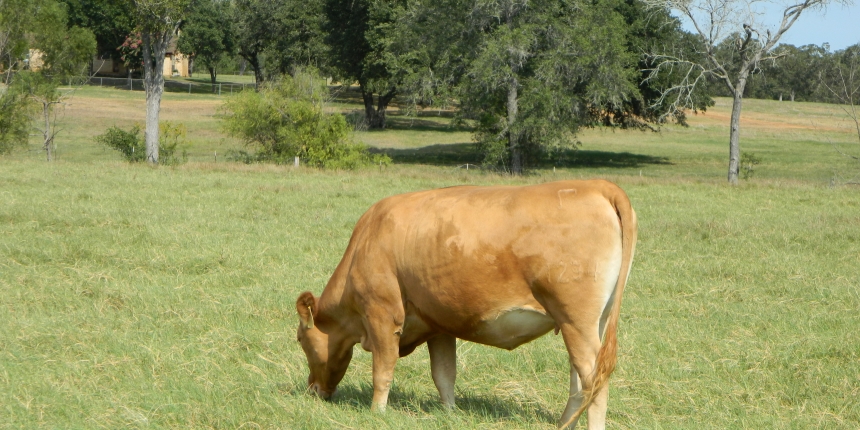 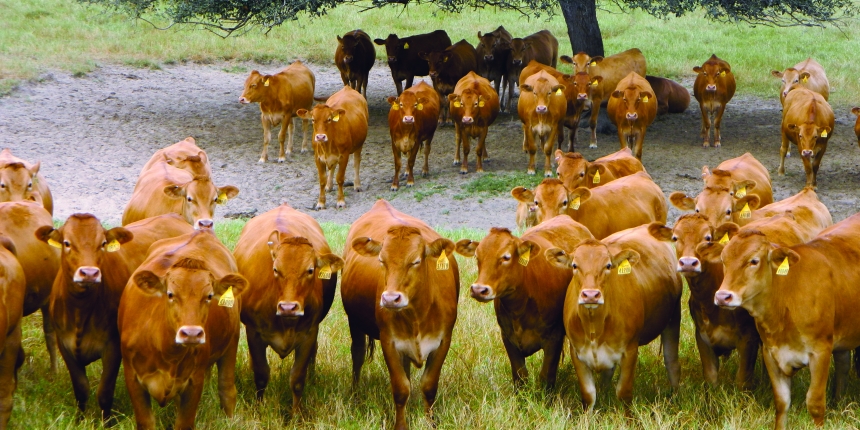 According to Jordan Beeman, President of Heartbrand Beef, the word is getting out there. “The general public is becoming more and more aware of the quality of Akaushi beef. We currently sell over 100,000 pounds of Heartbrand Certified Akaushi Beef per week with the largest percentage going to large box distributors and smaller specialty meat houses.”

Coupled with the recorded parentage of the U.S.-born calves, the lineage of the American Akaushi can be traced back to the origin of the breed in Japan. Labeled the Emporer’s Cattle in Japan, the Akaushi was given the name Japanese Red (Akaushi) for its distinctive red color. Their introduction in the United States began in 1994.

In many ways, the Akaushi can somewhat be looked upon as a super breed for its genetics, fertility, ease of calving, performance and its extremely high marbling carcass value. Research has shown the Akaushi meat to contain extremely high amounts of intramuscular fat or marbling, with a fatty acid composition that is much lower in saturated fat and cholesterol, while higher in monounsaturated fat and conjugated linoleic acid (CLA). CLA has proven to be a beneficial and essential fatty acid in human nutrition. At the same time, the cattle consistently produce meat that is above USDA Prime in marbling content.

According to JoJo Carrales, Vice President of Operations for Heartbrand Beef, the bottom line is that the Heartbrand Beef has a positive ratio of monounsaturated to saturated fatty acids, a ratio of about 1.4 on the full blood cattle. “Other medical research has shown that a higher intake of unsaturated fat is healthier for preventing heart disease. What is unique for us is that we are the only source animal protein that I know of with a positive ratio of unsaturated fat. A full-blood animal or a cross-breed consistently produces carcasses that grade Prime or Choice.”

Since 2006, Heartbrand Beef has worked diligently to build its herd of Akaushi cattle, and in doing so, has controlled the genetics to ensure that the integrity of the breed remained intact both on the processed side and the production side. “Now, however,” notes Carrales, “the herd has grown enough that Heartbrand Beef feels it is time to open up the Akaushi genetics to producers around the world.”

Beeman says, “This was a long term goal for us, but we wanted to build up the breed and maintain the integrity of the Akaushi before we took the next step. As a result, we have grown slowly. We currently have producers that are contracted to raise Heartbrand cattle for us, and we also have F1 producers that buy full blood Akaushi bulls from us and breed them to their own cows. We then buy back weaned calves, feeder calves and fat cattle. However, to this point, they could not raise their own bull calves.”

At the same time, Akaushi cattle have been placed in all parts of the United States and have acclimated well to their new environment. “We have had cattle in South Dakota for several years and also in Idaho, and the cattle have adapted well,” says Beeman.

Open for business: opportunity for producers 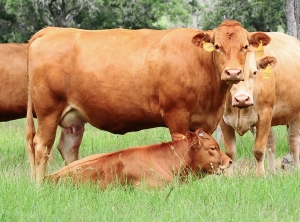 Carrales explains the new opportunity. “We are excited to open our door with this program and share the genetics to all who are interested in improving their herds. We will sell semen, embryos, females, bulls and help with genetic selection.”

Beeman adds, “Our Heartbrand Beef will always be the cornerstone of what we have established with Akaushi cattle. However, we have long dreamed of being able to share this with cattle producers of other breeds. We are changing our business model and trying to release genetics that can help other producers. We have the data collected by West Texas A & M and also the USDA data, which we can share with other producers.” 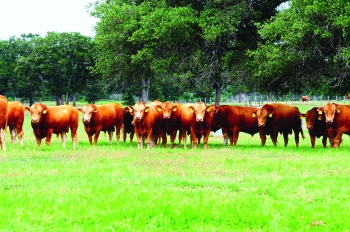 In all seriousness, Renfro is excited about the new opportunity Heartbrand Beef is now offering cattle producers. “My family thinks this is the biggest thing in the cattle industry in the last 30 years. We have purchased Akaushi bulls from Heartbrand since 2011. We currently have 57 Akaushi bulls.” As a matter of fact, Tara and William have also purchased seven Akaushi bulls to go with their own separate herd.

Renfro, however, was initially a hard sell. “I was dead set against it, because I simply didn’t think we could improve on what we were already doing with our Angus cattle. Boy was I wrong! We went to the Hearbrand ranch and met with Bubba, JoJo and Bill Fielding, and we really liked the people and what they told us.”

Long story, short…”We are all in!” By cross breeding with the Akaushi bulls, fertility and longevity have improved, along with the marbling and carcass qualities of the marketed calves.

“Using Akaushi bulls with our Angus has improved the quality of the beef. The loads that we now send to slaughter are all 100 percent choice grade and above. I also like the fact that I can contract with Heartbrand Beef to sell our calves directly to them when they are ready for market.”

Will they ever go full blood? “No,” says Renfro, “I’m a half blood breeder. With the huge pastures we have, we are simply not set up to do registered full blood. No, we like what we are getting now using the Akaushi bulls with our Angus cattle.” 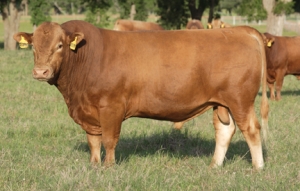 using Akaushi semen. “When I first looked at the data, I was pretty skeptical. I thought it was too good to be true, but I was more than pleased with the results.” Going back to the calves sold from the first cross of Limousin Angus and Akaushi, Marchant says, “We actually made more money from those half blood Akaushi calves that we sold at 900 pounds than those that we sold as finished cattle.”

In preparation for his third calf crop, Marchant is excited for the results. “What I have liked so much is that they fit in so well with all of our other cattle, and performed just as well as our English and continental cattle. ”

American Akaushi Association: there for the producer

The American Akaushi Association (http://www.akaushi.com) was established to promote the Akaushi breed as well as maintain and verify the purity of the breed, the performance of the offspring and the quality of the final retail product. The association is committed to increasing the number of Akaushi influenced cattle by working with producers who have a desire to significantly improve the quality and value of their calves using their current cowherd.

According to Bubba Bain, Executive Director, “The American Akaushi Association is there for the producer. Our goal is to educate the producers and the industry in general on the benefits of Akaushi cattle. We also help producers market their seedstock and replacement cattle as well as their terminal cattle.”

Carrales is excited that the American Akaushi Association is on board with this expansion process and will register cattle through the DNA process ranging from purebred Akaushi to crossbred animals.

Bain agrees,  “The protective measures taken to ensure that the integrity of the Akaushi breed was protected, were extremely important.”

He adds, “Now it’s time to offer the opportunity to all producers. We are excited that Heartbrand is opening up a whole new program for producers. This breed can make a huge difference in the cattle industry. Just one generation will make a difference and improve the quality and consistency of the beef product.”

Bain encourages producers interested in the Akaushi cattle to contact the American Akaushi Association for more information or give him a call (830) 540-3912.

This truly is the next step in the cattle industry. Beeman says, “We are so excited to be able to offer producers this type of opportunity. As Bubba mentioned, we really think the Akaushi breed can have a positive impact on the cattle industry!” For those who want to learn more about how the Akaushi breed can benefit their herd, they can contact Beeman via email at jbeeman@akaushi.com or call him at (361) 865-2121. They can also contact Carrales via email at jcarrales@heartbrandbeef.com or call him at (830) 540-3995.