Have Corral, Will Travel 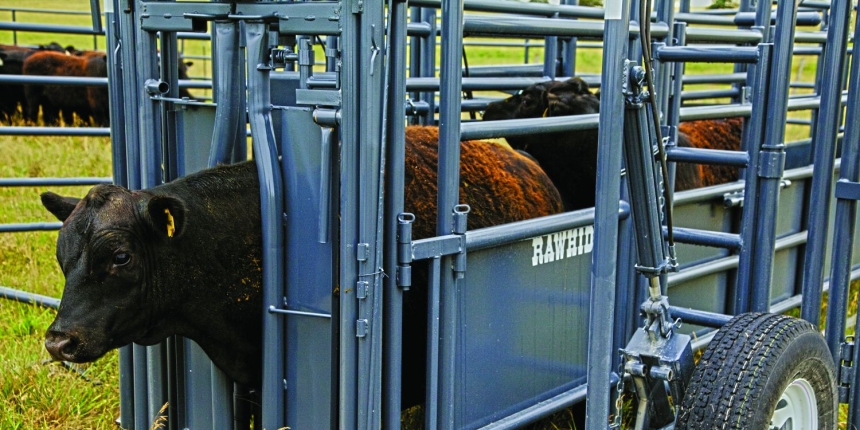 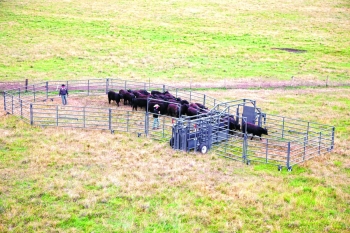 What cattle producer isn’t looking for ways to make work easier, minimize the need for extra labor and to increase business efficiency?  That is exactly what John McDonald had in mind when he invented the Rawhide Portable Corral System in 2002.

For the past 14 years, Rawhide Portable Corral Inc., (www.rawhideportablecorral.com), located in Abilene, Kansas, has become the standard in the cattle industry for portable corral systems. Simply put, this hydraulic portable corral on wheels with multiple pens can be hooked up to a vehicle and pulled just about anywhere and will fit into the same gate size as a pickup.

A vision
For McDonald, the vision of the Rawhide Portable Corral began years before that. “You know, I’ve spent most of my life around cattle and rodeo bulls. As a kid growing up, I would help round up bulls and later as an adult, I used to set up the portable arenas in coliseums around the country. It was labor intensive and such hard work.  Then years ago, when I was in California for a rodeo, I had an idea about a portable corral that would take out so much of the time and labor it took to round up rodeo stock and just plain cattle in general.”

After several years of work on the idea, in 2002, McDonald invented the Rawhide Corral, a portable corral system. “The design was a main frame with wheels that served as a trailer with a rack that held the gates.  “I wanted something that had wheels so it could be driven (pulled) to the location, that it had multiple panels for sorting, that the panels had wheels that made it much easier to move into place and finally that it was quick to set up.”

When developed, that is exactly what the original Rawhide Portable Corral did. McDonald was the first to design a hydraulic portable corral system with multiple pens, and to this day it is still the largest in the industry.

“We really did begin with nothing. I had $500 in my pocket when we began,” says McDonald with a smile.  As McDonald tried to construct, assemble and market the original Rawhide Portable Corral, companies twice reached out to him interested in partnering with him. Unfortunately, each time things did not work out, and instead the suppliers ended up just copying his corral.  As a result, “There are a lot of copies out there, but even though they copied the design, I don’t believe that they have ever been able to duplicate the quality and workmanship that we put into the real Rawhide Portable Corral product!” 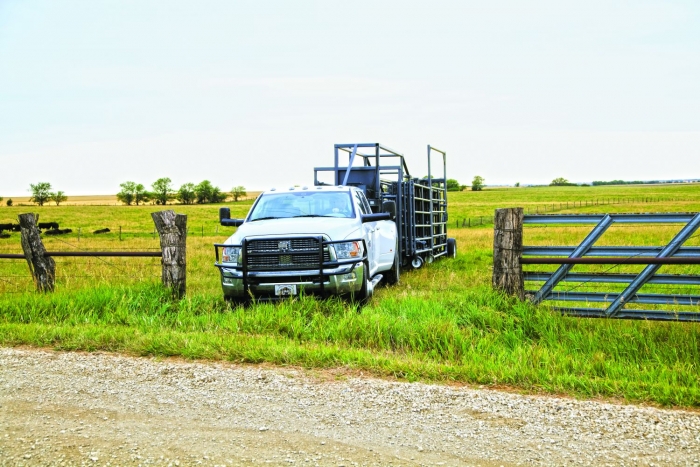 This was a frustrating time for McDonald. However, he and his wife Mary have weathered the storm, and this past year they did $7,500,000 in business!  They’re not stopping here.

“It has been an uphill battle, but this is our baby!  We have put our heart and soul into developing a portable corral system unlike any other in the business. They have tried to copy it, but they have yet to duplicate and design their corral to the specifications and the quality that we have.”  The commitment of customers to the Rawhide Portable Corral System sends a message loud and clear reaffirming the efforts of the McDonalds. Norman Hazelbaker from Fort Scott, KS has this to say.

“Rawhide is a product that cattlemen can use for years to come; it is a great product and any cattleman who has made the investment can be proud that he made the right choice. It was a relief to know that there would not be any lifting and the cattle worked so easy. The system was easy to fold up and set up in another location.” 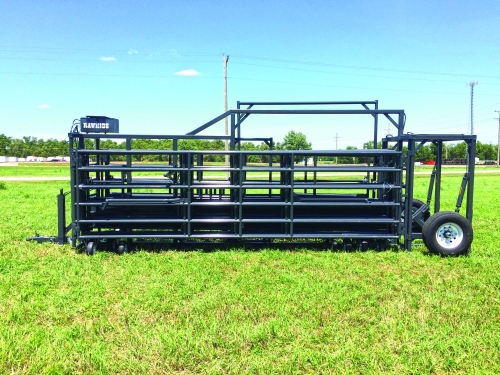 In 2010, McDonald designed what he calls the Cadillac of portable corral systems: the Rawhide Processor. The key here as with the original Rawhide Portable Corral is to eliminate hauling and lifting of individual panels, no lifting and no need for other help!  Instead, a single person can haul the entire system from pasture to pasture and in 10 minutes have the portable corral up and ready for cattle!  All without the need for any heavy lifting.

In simplest terms the Rawhide Portable Corral System is an all-hydraulic system with panel pieces pinned to the main system with each 18-foot panel made moveable by solid rubber wheels. Thus, all panels can work as a fence or as a gate, so the portable corral can be turned into a single or multiple corrals based on the producer’s needs and the desired shape and design. The system comes in three sizes: standard for 40-50 pair/80-100 yearlings; large 80-100 pair/160-200 yearlings; 140-150 pair/280-300 yearlings.

The Rawhide Processor is an innovative portable corral system with hydraulic transport wheels, which are raised and lowered with the flip of a switch. No need to remove them.

This model is a gooseneck with a sheeted alley and features the options of:
• The Rawhide can form 2, 3 and even 4 pens to aid with sorting your livestock.
• A manual or hydraulic adjustable alley, which allows you to narrow the alley for calves as well as squeeze cattle in the alley. The adjustable alley can be sized from 30" down to 16" either manually or hydraulically.
• A permanent sheeted adjustable alley to aid with working your livestock on site and in the field.
• A self-contained power unit with a long-life marine battery and a solar panel mounted on top.
• An option of mounting a head gate to the end of the alley for easy, on site cattle processing.
• An option of a self-contained loading chute to the system.

Silas Chapman of Chapman Cattle Company in Stettler, Alberta is glad he purchased the Rawhide Processor. “The Rawhide Processor that I recently purchased is slick. I have used it for the first time to gather and load 120 two-year old bulls of pasture and it worked well. It folded out in 10 minutes and back together in as much time without much effort.  “Overall, I am glad I made the investment as it will save me a lot of time and effort not having to move panels around, and the super large processor creates an environment of less stress on the cattle as it has the capacity for large groups of cattle to still have room once caught.”  At the same time, Chapman appreciates the customer service he has received. “I appreciate the good customer service in the office as well as the salesman taking the time to show me little tips and tricks before I pulled out of the yard with the unit.”

Back to the original
Yep, McDonald says, he’s bringing back his original Rawhide Portable Corral, the one that he introduced in 2002. This model is called the Rawhide Original and is updated with permanent hydraulic transport wheels.  “The Processor has all of the options and has been well received. However, we are going to bring back our original model. We can build that original corral with a design that will give our customers way more for their money than our competitors.  “Plus, the cost will be significantly less than the Processor. Yet, customers can still do all that they need to do with their cattle.”

A look to the future
The future for Rawhide Portable Corral Inc., looks bright. “Over the past 14 years, we have done all of this with direct sales-no dealers, and we have corrals coast to coast in the United States and Canada,” says McDonald.  “We are now open to the idea of dealers, and if anyone is interested, they can contact us to learn more. Our sales occur year around, not just seasonal. Since the corral can be used for just about anything, costumers often use them daily.”  At the same time, McDonald is always working on new and innovative designs and ideas for the corral and livestock equipment that have never been seen before.  That’s good news for cattle producers, and you can bet there will be more to come from Rawhide in the future!