A Guide to Forages and Pasture-Feeding 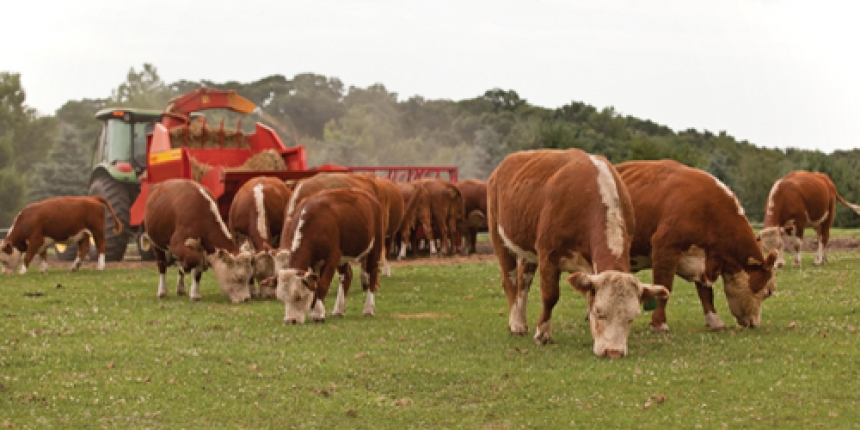 Forage (pasture, silage, hay) is the most natural feed for cattle. Ruminants do very well on forage but don’t grow quite as fast or get fat as quickly as when they are fed grain. Many young cattle are finished in feedlots on grain to save time and total feed. If grain-feeding can take an animal to slaughter readiness before going through another winter (on hay), it can be cheaper. But pasture is the most abundant and cheapest feed for other cattle.

The following is an excerpt from Storey’s Guide to Raising Beef Cattle (Storey Publishing, 2009). This best-selling classic provides health, handling, feeding and breeding advice to anyone raising beef cattle.

Green pasture supplies cattle with all the necessary nutrition and energy. By grazing lush grassland, they take in adequate protein, energy, vitamins and minerals (unless soils are very low in certain important trace minerals). An exception may be early spring grass just starting to grow — making fast growth in which plants have high water content and lower percentage of actual nutrients by weight and volume. Quality of pasture depends on a number of factors, including:

- Level of maturity of plants at harvest

If properly grown, cut at the right time (while plants still have high nutrient content, before mature and dry), properly cured and carefully stored to prevent weather damage, hay can be excellent feed for cattle, supplying all necessary nutrients. Legume hay has more protein than grass hay, and some grasses have more protein than others. Good grass hay that’s cut while green and growing can have a higher protein content than legume hay cut late. For optimal quality, hay should be cut before it is fully mature (before legume bloom stage and before heading out of grass seeds). If you cut hay when about 15 percent of the plants have bloomed, you get better volume and still have good quality. Good hay is green and leafy with small, fine stems.

Native grass hay has energy values comparable to legumes if harvested at the same stage of maturity, but about half the protein. Legumes such as alfalfa may have 50 to 60 percent total digestible nutrients (TDN), whereas mature grass hays have 45 to 50 percent TDN. Grass hay can be lower in phosphorus and is always lower in calcium than alfalfa, but a combination hay made up of alfalfa and grass is better for beef cows than straight alfalfa hay.

The amount of hay needed for an animal varies depending on age and size, body condition and so forth. Evaluate the condition of the animals and decide whether they are wasting hay or cleaning it up. If hay is unpalatable (i.e., coarse or moldy) or wet, some waste will occur even if cattle aren’t getting enough to meet their needs.

Growing Your Own Hay. For maximum hay production, plants need adequate nutrients — which may mean using fertilizer, commercial or natural. Cattle manure makes the best fertilizer. Clean out corrals once a year and spread the manure over fields and pastures. Hay should be harvested when plants are high in nutrition content, just before they mature and produce seed heads. Total harvest yield may be a little higher after it is fully mature, but protein and digestibility will be lower.

Hay must be properly dried before it is baled and stored; if baled too green it will mold and may ferment, heat and start a fire. Hay baled too dry will lose nutrients and leaves. Plants contain about 60 percent moisture or more when cut and must be dried to 12 to 16 percent for safe baling and storage. (The actual drying percentage varies with haying and storage conditions.) Haystack cover: A row of bales down the center of the stack gives a slope to the tarp, so moisture will run off.

Alfalfa (green or fed as hay) is good feed for calves or young cattle, lactating cows and pregnant cows in late gestation. But they don’t need straight alfalfa because they don’t need that much protein, and rich alfalfa with no grass or other forage to dilute it can cause digestive problems, diarrhea and bloat. A mix of grass and alfalfa is usually safer and healthier than straight alfalfa. On alfalfa pastures, feed a bloat preventive to keep from losing cattle.

Don’t feed dairy-quality alfalfa hay to beef cattle. It’s much richer than they need, and the risk for bloat is great. It’s also the most expensive alfalfa. For beef animals, feed first-cutting alfalfa if it’s the only roughage source, since it contains some grass and can be an ideal ration. The second or third cutting is just alfalfa — it grows back faster than grass. It has more protein than needed and should not be fed by to beef cattle by itself. It is an ideal supplement, however, for poor-quality forages such as dry pastures, poor hay or even straw. Cattle can do well on a mix of straw and alfalfa.

To avoid bloat, feed alfalfa with a high-fiber feed, don’t let alfalfa leaves build up in a feed bunk, allow plenty of space for all animals to eat at once (so some won’t overeat), and never let hungry animals eat leafy alfalfa or they’ll load up the rumen too quickly. Be cautious using wet alfalfa pastures or feeding wet alfalfa hay. Lush alfalfa (especially if it’s just a few inches tall and very palatable and tender) can quickly cause bloat, especially in early morning if there’s dew or frost on the plants.

Make sure alfalfa hay is not moldy or dusty. Some molds can cause respiratory problems or abortion in pregnant cows. Avoid stemmy, coarse alfalfa. Protein and nutrition is mainly in the leaves, so stemmy hay is less nutritious and low in protein. Cattle won’t eat it well; coarse stems are hard to chew.

There are two kinds of feed — forages, high in fiber (more than 18 percent) and low in TDN; and concentrates, low in fiber and high in TDN. Concentrates are dense, with more energy (more TDN) for their volume. They are also more expensive than forages, but have a higher percentage of easily digested carbohydrates.

When feeding concentrates, remember that not all grains weigh the same. Feeding by quarts or gallons can get you in trouble. Weigh feeds, find out how much your scoop or bucket really holds in terms of weight for a particular feed, and recheck it when changing feeds. Making a change in a steer’s ration without adjusting for weight, for instance, may lead to digestive problems.

If pastures are dry and hay quality is poor, cattle may not get necessary nutrition unless you add supplements. Many cow herds must be supplemented through winter. In northern areas, this means full feed if grass is frozen, snowed under or dried up; in southern climates it may just mean a supplement for what is missing in forage. In the Southwest, supplements may be necessary when hot or dry weather causes grass to become dormant and lose nutrition.

Supplements are sometimes needed not just because forage has become low in nutrients, but also because cows are eating less. As fiber levels increase with deteriorating forage quality, more of the woody part of the plant is left. As this type of fiber builds up in the rumen and slows down passage of feed through the animal, less space is left in the digestive tract. The animal cannot eat as much feed per day. So cattle are eating feed of low nutritional value and less of it. They lose weight unless supplemented.

What to Give as a Supplement?

Cows without enough energy milk poorly and don’t breed back. But a high-energy, grain-based supplement is inefficient, expensive and detrimental to cows on poor pastures. Do not feed highly palatable grains and concentrates — cows will just hang around feeding areas waiting to be fed, spending less time grazing and increasing the amount of supplement needed. Because grain supplements are more palatable than dried-up grass, cattle want the supplement instead and eat less grass.

With a protein supplement, cows will eat as much as 50 percent more low-quality forage or even 70 percent more poor-quality hay, but they must have adequate forage to supply the carbohydrates for energy. If you are wintering dry pregnant cows, this increase in feed consumption can enable them to maintain body weight. Always use natural protein (such as alfalfa or other high-protein plant matter) to supplement low-quality forages. Nonprotein nitrogen sources such as urea are not utilized as effectively by cows eating low-quality forages.

If you have a lot of protein-deficient pasture, choose supplements high in rumen-degradable protein like soybean meal, cottonseed meal or distillers grains. But if cows need more energy, use supplements composed of bran feeds that increase energy without limiting forage use. If short on grass, use traditional supplements based on cereal grains, which decrease the cow’s forage intake without reducing total energy.

Alfalfa hay is an economical protein supplement for cows in late pregnancy or after calving. Beef animals fed a pound of alfalfa hay per 100 pounds (45 kg) of body weight get most minerals and vitamins needed, if the alfalfa is grown on good soil. Alfalfa has a high level of calcium, important for young cattle and lactating cows. It’s a good source of carotene (which cattle convert to vitamin A), vitamin E and selenium, unless the alfalfa was grown on selenium-deficient soils.

Partnering With Producers For Success